CULTURE Saudi women spend big on makeup, even if it’s just a glimpse

Saudi women spend big on makeup, even if it’s just a glimpse 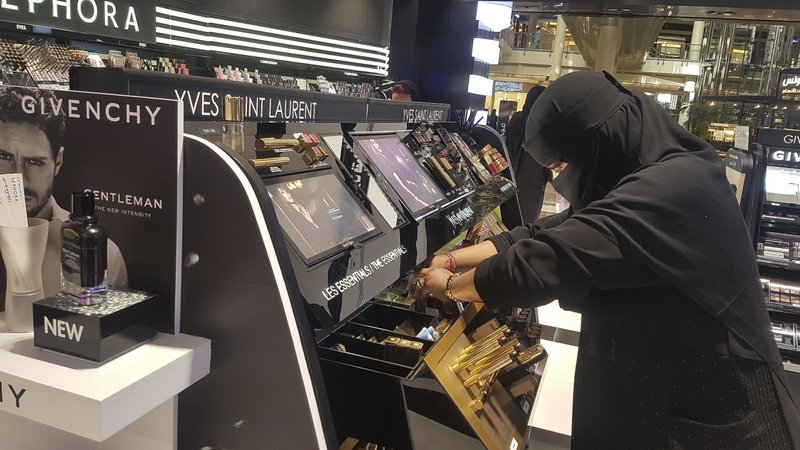 Green lipstick, blue lipstick and 40 shades of foundation to choose from are just some of the reasons 18-year-old Shahad al-Qahtani is excited about superstar Rihanna’s makeup line debut in Saudi Arabia.

Rihanna, known worldwide for her chart-topping songs and daring, provocative style, is wildly popular among the Saudi women coveting her new makeup line called “Fenty.” Rihanna and other celebrities like Kim Kardashian who experiment boldly with their hair color, makeup and clothes have become household names in Saudi Arabia, where fans can follow their every move on social media sites like Instagram and Snapchat.

Their styles, however, stand in stark contrast to how most Saudi women dress in public. Many cover their faces and hair with black veils. Women in Saudi Arabia must also wear long, loose black robes, known as abayas, over their clothes in public.

“I’ve tried her brand in Dubai and I came here to buy the things that were sold out there,” al-Qahtani said as she selected products to put in her shopping basket from Rihanna’s Fenty line that launched Thursday in Sephora makeup stores across the kingdom.

Al-Qahtani said she likes to experiment with her style and bold makeup choices at parties and weddings where women are segregated from men.

Even though most women will cover their face and hair in public, makeup sales are one of the biggest spends among Saudi women. This is in part because of the increasing number of Saudi women joining the workforce who now have their own salaries to spend from.

Unlike in many Western countries where more natural makeup looks are en vogue, women across Arab Gulf countries often lean toward bright, eye-catching makeup trends and accessories that offset the utilitarianism of black veils and abayas.

“As Gulf women, we love beautiful things. We don’t need an occasion for it,” said Najla Sultan bin Awwad, a mother of two in her 30s who started working for the first time last year at Sephora.

“We’re in an era where women are basically not even leaving the house without fake eyelashes on. We’ve started opening up in the Gulf and you’ll see women who cover their faces putting on colored contact lenses, eyelashes and drawing their eyeliner the way they want,” said bin Awwad, who spoke from behind a face veil that showed her eyes rimmed with smoky eye shadow.

Before working at Sephora, she said she used to spend nearly all her money on makeup.

“The reason my husband agreed to me working is because he sees how much I love makeup and how much I used to spend on it,” she said, laughing.

According to marketing research group Euromonitor International, rising employment rates, especially among women, have increased the affordability of beauty and personal care products, and encouraged consumers to spend more. Retail sales in Saudi Arabia on makeup rose from $410 million in 2012 to $576 million last year, said the report.

In 2012, the late King Abdullah implemented a decision to allow women to work in cosmetic and lingerie stores. It paved the way for thousands of Saudi women to work. The decision was largely supported by the Saudi public, though ultraconservative clerics criticized the measure and said allowing women to work in stores would open the door to lasciviousness and sin.

Previously, women who wanted to buy makeup or lingerie in Saudi Arabia would have to purchase these often personal and intimate products from an all-male staff of mostly lower-wage workers from the Philippines.

It created for awkward encounters when, for example, a woman wanted to try on a new eye shadow or foundation, but couldn’t lift her face veil in front of the salesman or allow him to touch her skin due to the country’s Islamic mores governing gender segregation. Sifting through lingerie pieces and having a male employee suggest the right bra size wasn’t any easier.

“We could never feel comfortable. It’s hard to buy makeup when a man is trying it out for me, testing it on my hand or my face,” said Haifa Alwathlan, who started working in clothing and makeup stores in Saudi Arabia soon after women were granted permission.

She said since starting work at Sephora, not only has she learned how to apply her makeup better, but she’s learned how to handle herself professionally.

“I’m the type who has a real temper. So when I started dealing with different types of people and customers, I learned how to manage my nerves,” she said.

Empowering more women to enter the workforce is seen as a necessary step toward strengthening the economy and creating millions of jobs for young Saudis who will be seeking employment in the coming years.

To satiate the desires of young Saudis and to make the country more resilient in the face of lower oil prices, Prince Mohammed is trying to boost what citizens spend locally on entertainment and fun.

He is also behind a decision to lift a ban on women driving, which will allow women to more easily get to work instead of having to rely on male relatives or costly personal drivers.

Other reforms include the return of musical concerts and performances that were once unthinkable only a few years ago. The kingdom also recently held its first ever fashion week. Earlier this week, Saudi Arabia opened its first movie theater, showing the blockbuster film “Black Panther” to a select audience. Tickets for the public are expected to go on sale in the coming days.

Despite the new attractions and entertainment, al-Qahtani, who’s still in college, said most of her monthly allowance is spent on makeup. Fenty would be this month’s splurge.

“I really love the foundation, but of course not for every day. And I also really love this red lipstick and these other colors. And the highlighters are amazing. The brushes are nice, but not ‘Wow’,” she said.