CULTURE Scaling the height of success

Scaling the height of success 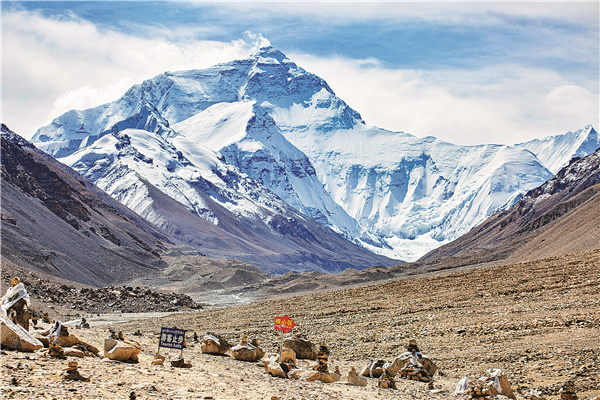 A photo of the key protected area of Qomolangma, known as Mount Everest in the West. (Photo: China Daily)

Tselo knows what it's like to be on top of the world, to scale the summit of his ambition. On May 27, 2020, Tselo, from the Tibetan ethnic group, alongside eight other members of the Chinese national mountaineering team for the mapping and surveying of the elevation of Qomolangma, reached the highest peak in the world. They achieved their feat after three days battling horrendous gales that registered wind speeds of 20 to 24 meters per second.

In those three dramatic days, they climbed from 7,028 meters above sea level, to 7,790, then 8,300 without sleep, before finally reaching the top.

"We failed twice before," said Tselo, the team's captain, at the recent launch ceremony of the book Zoujin Diqiu Zhidian (Approach the Summit of the Earth) in Beijing.

Published by SinoMaps Press, the finely decorated book is an encyclopedic introduction into Qomolangma, known as Mount Everest in the West. It covers the formation of the Himalayan mountain range and the Qinghai-Tibet Plateau 65 million years ago, scientific investigations into its environmental change, 18 routes to climb it, how to measure its elevation, which has been changing constantly with crustal movements, and last but not least, environmental protection.

The bulky, hard-cover book also contains 132 photos and 84 fine illustrations depicting the splendid views of Qomolangma as Asia's water tower and as the highest of nine peaks in the Himalaya Mountains, as well as its geological structure, ecosystem and atmosphere, among other items of interest.

With detailed maps and graphics, it provides a fascinating insight into Qomolangma, and its new height, and tells the chequered history of China's surveying and mapping of the mountain. Readers can also scan QR codes on the pages, accessing audio, video and a virtual reality 3D map.

Based on the previous six big-scale scientific investigations in the Qomolangma region, especially the second comprehensive scientific expedition to the plateau in 2018 and 2019, the book was an important attempt to combine scientific research and the popularization of science, says An Baosheng, a director on the book's editorial board, who's also deputy director of the Institute of Tibetan Plateau Research of the Chinese Academy of Sciences.

"Last year, when we were planning the book, we wanted to present the region using the logic of Earth System Science. Now we are happy to see this book tell a good story about a complete system of mountains, rivers, forests, farmlands, lakes, grasslands, sand and ice," An says.