The 8th Beijing International Film Festival came to a close on the evening of Sunday, April 22. The Best Feature Film award goes to "Scary Mother." 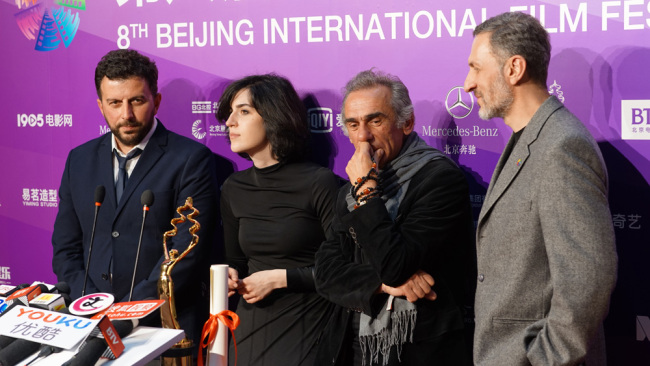 The 8th Beijing International Film Festival attracted 659 films from 71 countries and regions. After five rounds of screening, 15 films were nominated for Tiantan Awards including 13 overseas films and 2 local films. On Sunday, at the closing ceremony of the event, 10 Tiantan awards were given out.

"Operation Red Sea" earned a 3.6 billion yuan box office in the first quarter of 2018. It won the Best Visual Effects award. In his acceptance speech, film producer Yu Dong said he hopes that the world sees improvement in the level of Chinese films.

"This movie is very hard to make and it is a great honor to participate in the Tiantan awards. I hope that through the Beijing International Film Festival, filmmakers from all over the world will see the efforts of Chinese filmmakers and see the progress of Chinese films at the production level, the technical standards and special effects, as well as the progress of the film industry. "

The Chairman of the 8th Tiantan awards, Hong Kong director Karwai Wong, says that one of the key phrases of this year's awards is Women's Films.

"5 of the 15 films this year are all about women's power and the 5 films are directed by women, and in particular, two of them are directorial debuts. This affects the jury's choices. We want more people to pay attention to women's rights and interests, and we also want more female filmmakers to use film to write stories about women. "

"Women power" was heard frequently on the night at the awards ceremony. "Scary Mother," Best Film winner, was co-produced by the countries of Georgia and Estonia.

"Scary Mother" tells the story of a 50 year old housewife making a choice between family life and her passion of writing, and depicts the dilemma between women's lives and the workplace, showing the strength and courage of women.