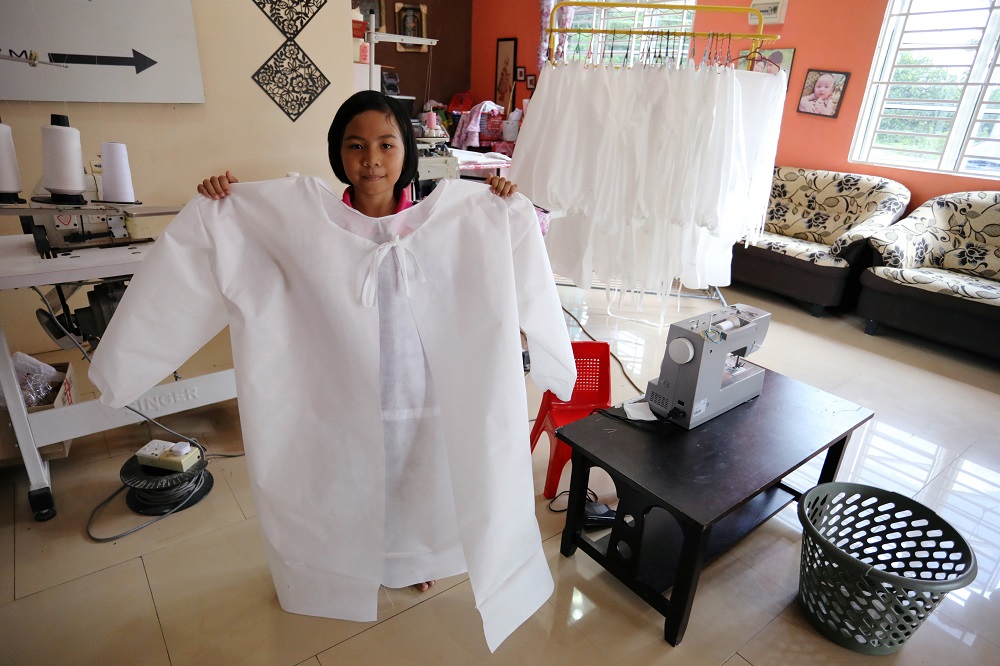 Nur Afia Qistina Zamzuri poses for a picture on May 5, holding personal protective equipment she made for medical workers in her hometown hospitals, amid the COVID-19 outbreak, in Kuala Pilah, Malaysia. (Photo: Reuters)

SEREMBAN, Malaysia－For a nine-year-old Malaysian schoolgirl, the novel coronavirus was hard to fathom. But Nur Afia Qistina Zamzuri knew one thing for sure: It was dangerous.

So when she heard that a local hospital was looking for people to sew protective gear, she immediately volunteered.

"I felt bad, so I told my mom I wanted to help," Nur Afia said at her home in Kuala Pilah, a town in Malaysia's southwestern Negeri Sembilan state.

Nur Afia, who learned to sew at the age of five, can make four full personal protective equipment gowns a day, parking herself at a sewing machine between playtime and attending online classes while schools are closed amid a countrywide lockdown.

Malaysia, which until mid-April had the highest number of coronavirus cases in Southeast Asia, reported 6,941 infections, including 113 deaths as of Monday, according to the COVID-19 dashboard of the Center of Systems Science and Engineering at Johns Hopkins University in the United States.

The country imposed movement curbs to stem the virus outbreak on March 18, though some restrictions were eased earlier this month.

Activities involving mass gatherings or those that would increase the risks of infections are still not allowed.

Malaysian Prime Minister Muhyiddin Yassin stressed this month that interstate travel is still banned, including the traditional trips people make to hometowns to celebrate Eid al-Fitr, but couples that work in separate states would be allowed to travel across state borders.

Since early March, Nur Afia has made 130 gowns for two nearby hospitals. Sixty more pieces are on the way, though this month has been more challenging as Nur Afia, whose family is Muslim, observes the Ramadan fasting month.

Still, fasting has not stopped her, and she often starts sewing after the predawn meal.

Nur Afia picked up an interest in sewing after watching her mother Hasnah Hud, a tailor, makes clothes in her home business.

As Nur Afia's skills improved, she begin earning her own money stitching together pillowcases and patching up torn clothes for the family's neighbors and relatives.

Hasnah said her daughter became more motivated after seeing photos of medical workers wearing the gowns she had made.

"She said 'Mom, I think I have no school work so I want to sew more'," Hasnah said.