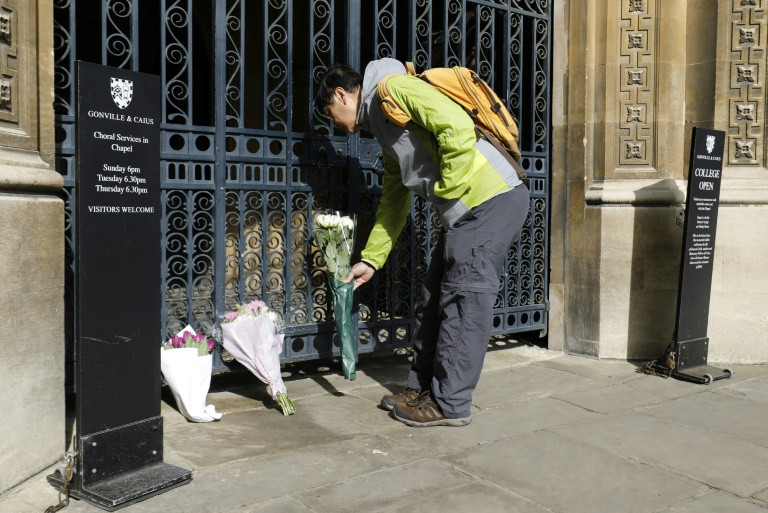 Well-wishers such as this man laying flowers outside Gonville and Caius College, Cambridge, where Stephen Hawking worked to unlock the secrets of the universe, have flocked to pay tribute to the physicist, whose funeral will be March 31 (Photo: AFP)

The service will be held in the prestigious institution's Great St Mary's church, a short distance from Gonville and Caius College, where where he worked at unlocking the secrets of the universe for more than 52 years.

British physicist Hawking died aged 76 on March 14 after a cosmic career in which his mental genius transcended his physical disability.

Propelled to stardom by his 1988 book "A Brief History of Time", an unlikely worldwide bestseller, Hawking's genius and wit won over fans from far beyond the rarefied world of astrophysics.

As a scientist he earned comparisons with Albert Einstein and Isaac Newton.

Family, friends and colleagues will be invited to the private funeral service, which takes place at 2:00pm (1300 GMT). A private reception will be held afterwards at Trinity College.

Hawking was famously an atheist, something his children Lucy, Robert and Tim touched on, as they thanked people for their "wonderful tributes" and messages of condolence.

"Our father lived and worked in Cambridge for over 50 years. He was an integral and highly recognisable part of the university and the city," they said.

"For this reason, we have decided to hold his funeral in the city that he loved so much and which loved him.

"Our father's life and work meant many things to many people, both religious and non-religious. So, the service will be both inclusive and traditional, reflecting the breadth and diversity of his life."

Several thousand people have signed a book of condolence at Gonville and Caius, while many more from around the world have sent messages in an online version.

Hawking defied predictions that he would only live for a few years after developing a form of motor neurone disease in his early 20s.

The illness gradually robbed him of mobility, leaving him confined to a wheelchair, almost completely paralysed and unable to speak except through his trademark voice synthesiser.

He became one of the world's most well-regarded scientists and entered the pantheon of science titans.

Hawking died peacefully at his Cambridge home. His health had been deteriorating since the New Year.