Scientist plants corals in South China Sea to save ecosystem 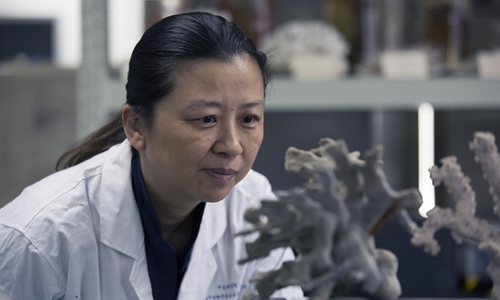 For Huang Hui, planting corals in the deep sea is the most beautiful job in the world. "Coral reefs are rainforests under sea, like a garden in the water," said Huang. "It is significant to recover and protect them," Huang told the Global Times.

Covering less than two-thousandth of the space in the ocean, coral reefs provide shelter for more than a quarter of the world's sea creatures. However, this ecosystem that has existed for hundreds of millions of years has come under threat in the past few decades.

Huang, a research fellow of the South China Sea Institute of Oceanology, Chinese Academy of Sciences based in Guangzhou, capital of South China's Guangdong Province, has worked on coral research and protection for 22 years.

Xisha Islands in the South China Sea was once a paradise for fish and algae. It is now silent in the water there because the coral reefs are in critical situation, Huang said.

In 2002, Huang went scuba diving in the waters near Xisha. In addition to getting an irremovable suntan, she was left with memories of a beautiful experience with crystal clear water and an abundance of colorful corals and spiral shells.

However, much of the breathtaking scenery of this reef has disappeared due to climate change and human activities. All of these factors led to the decline of the coral reef in the near shore waters.

"We started to cultivate corals near the Xisha Islands in 2010, and restored more than 200,000 square meters of coral reefs," Huang told the Global Times.

"Global warming is the reason for the disappearance of reefs in the world range, adding impact to other human activities such as overexploitation and coastal development," Huang told the Global Times.

After conducting environmental investigation and water evaluation, Huang and her team started to pick coral larvae and plant them on a man-made framework in the sea. After eight months to a year, these corals are planted on the seabed.

It indeed seems to be the most beautiful work in the world, but Huang has to overcome difficult conditions both on land and in the sea.

"We have to overcome the nausea when we were on a boat, which is painstaking," said Huang.

After seasickness, Huang has to wear a 15-kilogram scuba diving kit as the seawater moves forcefully around the diving site. "I vomit sometimes in the water," said Huang. She dives in the deep sea every winter. At night she may encounter poisonous creatures such as cone snails or certain sea urchins.

"I told my students that if you love the job, diving is a joy, otherwise, you will only feel the pain, so you might as well love it," she said.

"A hammering wave of 10 meters under water takes much more strength than the same move on the land, and it takes more oxygen, so I had to change my oxygen tank every 20 minutes," said Huang. But her happiness lies in the sea.

"They grow so fast! I was thrilled when I returned and saw that they grew a lot," said Huang, adding that she gained so much joy from meeting her research goals.

In order to increase the corals' survival rate, Huang had to learn about their living and reproduction patterns. "Coral is a creature that lives in the waters with high-transparency and with a temperature between 22 and 28 C, since it obtains nutrition from the photosynthesis of algae," said Huang.

After 20 years of hard work in the sea, Huang and her team have a clear picture of the reproduction patterns of corals in the South China Sea. They can expect the corals' ovulation period with only a three-day margin of error.

In 2004, when Huang was attending the 10th International Coral Reef Symposium, she found herself the only representative from the Chinese mainland. She said she felt sad but she made up her mind to reinforce communication with other countries to improve China's level and status in coral research.

"Now, China is in a leading position in terms of technology and coral planting scale," Huang told the Global Times.

Huang believes that people's awareness of coral protection matters to the sustainable development of the coral reefs.

"I want to call on more people to love nature and look at the ocean in awe," Huang said.

As a result of the efforts of Huang's team and other parties, Hainan Province released a law in 2017 banning reef exploitation, trafficking and damaging.

"A group of 'folk scientists' have also been trained with the hope that more people can gain awareness of the significance of coral reef protection and know how to protect them," said Huang.

"I am 50, and when I become 60, I hope that not only a coral island will be built but a sustainable development pattern will also be created," said Huang.

"The ideal state is that the coral island should be able to support fishermen and preserve the ecosystem," she added.

The force of an individual might be small, but she expressed confidence that others will act to save our oceans, and that one day, she will once again see those beautiful coral reefs that have disappeared.