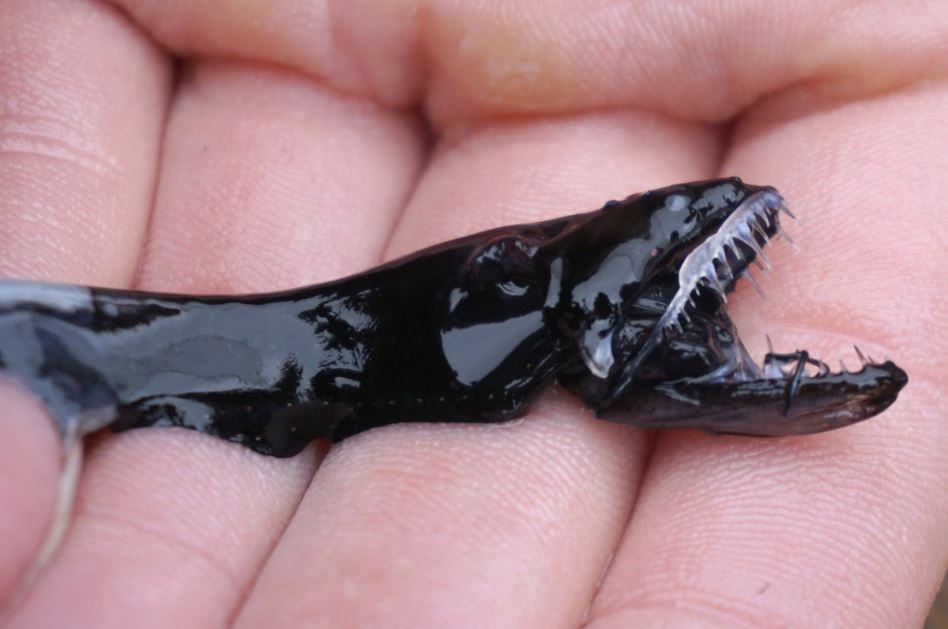 A dragonfish during a specimen collection session along the coast of San Diego, Calif. (Photo: AP)

A deep-sea fish can hide its enormous, jutting teeth from prey because its chompers are virtually invisible — until it’s too late.

What’s the dragonfish’s secret? The teeth are transparent, and now scientists have discovered how the fish accomplished that trick.

Findings were published Wednesday in the journal Matter.

The dragonfish is a small predator with jagged, needle-like teeth protruding from a jaw that can extend to bite into prey up to half its body size.

“They look like monsters,” said Marc Meyers of the University of California, San Diego. “But they’re mini monsters” — about as long as a pencil.

Despite their short stature, these fish are at the top of the food chain in their deep-ocean realm where it’s almost pitch black.

Using microscopes, Meyers and his research team examined the teeth of dragonfish they had dredged up from about a third of a mile (500 meters) underwater off the coast of San Diego.

Dragonfish teeth are made of the same materials as human teeth — a protective layer of enamel on the surface and a tough, deeper layer of dentin. But the minerals have a much finer microscopic structure that is organized more haphazardly.

“That was very surprising to us,” Meyers said.

The result is that light in the environment or from bioluminescence— even from dragonfish themselves — doesn’t reflect off the teeth. Instead, most light passes through the teeth so they’re almost completely concealed.

This, the researchers believe, makes the dragonfish a stealthier hunter.

Transparent teeth could be a common strategy among deep-sea predators, said Christopher Kenaley, a fish biologist at Boston College who wasn’t part of the study, noting that some other fish share this feature.

Among the most well-known of the others are anglerfish, stubby creatures that wave a glowing rod-like growth from their heads to lure prey.

Nobody has actually seen dragonfish feed in the wild, but the researchers make a good case that these transparent teeth are an evolutionary adaptation for hunting in the deep sea, Kenaley said.