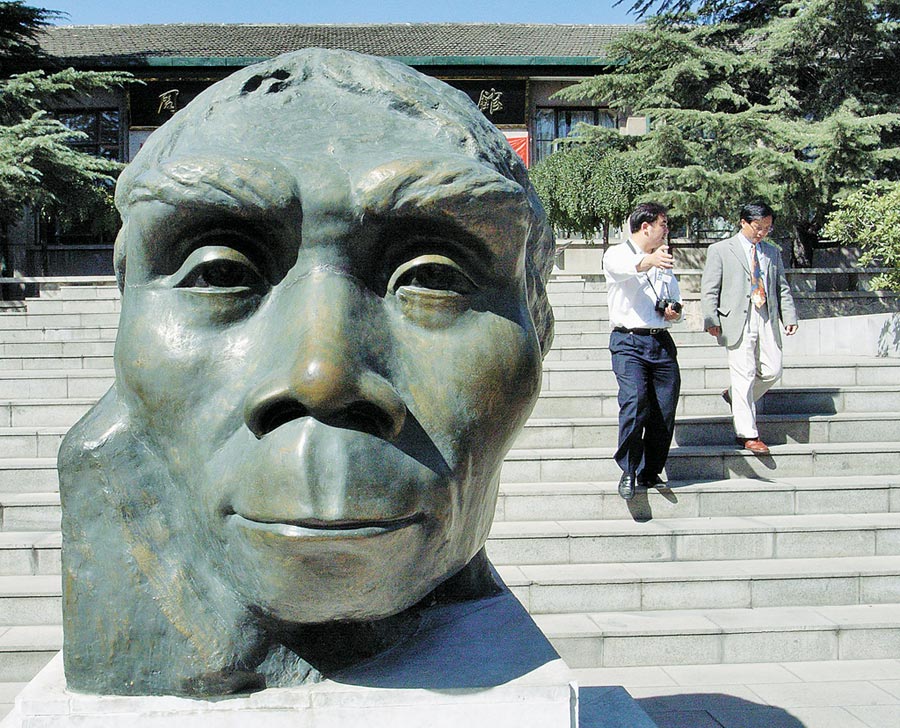 BEIJING, Dec. 2 (Xinhua) -- Global paleontologists gathered in Beijing Monday to mark the 90th anniversary of the discovery of the first skull of Peking Man, the homo erectus that lived in the suburbs of today's capital of China about 700,000 years ago.

Nearly 200 Chinese and foreign scholars attended the international symposium on paleoanthropology to share their latest discoveries and push forward the research on human origin and evolution.

The first complete skull of Peking Man was found by Chinese archaeologist Pei Wenzhong in December 1929 at the Location 1, or the Peking Man Site, one of the four sites in Zhoukoudian in suburban Fangshan district where ancient human fossils were found.

The big collection of fossils, including six skulls, unearthed at Location 1 during 1920s and 1930s, were found to belong to over 40 individuals. Almost all of these fossils were missing during World War II.

Over the past 90 years, more fossils of ancient human dating back to the Pleistocene (about 2.9 million to 11,700 years ago) have been found at over 70 sites across China, Wu Xiujie, a researcher with the Institute of Vertebrate Paleontology and Paleoanthropology (IVPP) under the Chinese Academy of Sciences, said at the symposium.

The latest studies on Zhoukoudian sites show that the homo erectus in Far Eastern and African Homo can be grouped as the same species due to their similar characteristics, Wu said.

She said that different homo erectus branches may have existed in the late Middle Pleistocene of China with complex physical characteristics and large internal variation.

"The discovery of the Peking Man fossils indicated the existence of homo erectus, which was a giant leap in the research of human evolution at that time," said Gao Xing, a researcher of the IVPP.

Gao and other scholars have kept searching for clues about the missing fossils at home and abroad, but found none. "As long as there is any hope, we will spare no effort to look for them," he said.

"Zhoukoudian is not only a relic for visitors to remember, but also a research base full of academic vitality," Gao said. "More excavations and studies at the site are carried out."

The site was listed by the United Nations Educational, Scientific and Cultural Organization (UNESCO) as a world heritage in 1987.

"Zhoukoudian is more than a place where we found human fossils," said John W. Olsen from the University of Arizona, adding that the legacy is of great significance for its "interdisciplinary perspective, long-term international collaboration and integrated paleoanthropological orientation."

The participants also celebrated the 90th anniversary of the founding of the IVPP.

"I think IVPP is really now one of the most important institutions in the world in paleontology thanks to the efforts made by the remarkable scientists," said Philippe Janvier, a French paleontologist.

Jingmai O'Conner, a foreign researcher working in the IVPP, planned to stay there for only a few years as a postdoctoral researcher, but ten years later he is still working in the institute.

"Nowhere else in the world is there such a large number of expert paleontologists under one roof, nor such incredible collections, or the abundant resources to study them," he said.

The IVPP will continue to cultivate talents in the fields of paleontology, paleoanthropology, archaeology, stratigraphy and paleoenvironment, and establish a world-class scientific platform on studying biological evolution and the origin of human beings, said Deng Tao, director of the IVPP.

A total of 90 specimens from the IVPP are being showcased to the public on an exhibition opened Saturday to celebrate the two anniversaries, one of which is a skull fossil model of Peking Man.