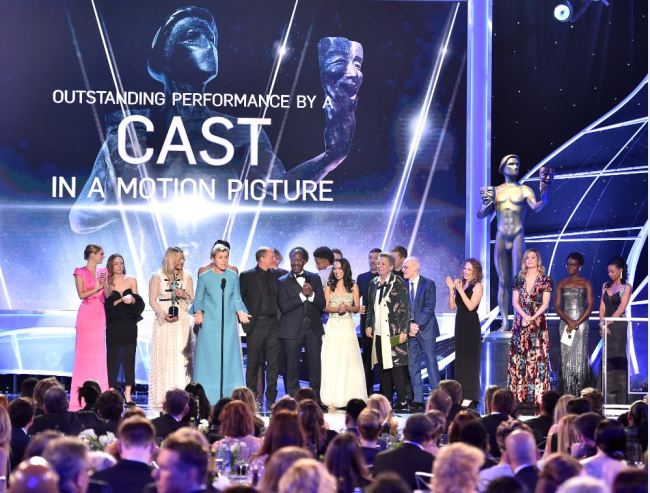 Frances McDormand and the cast of "Three Billboards Outside Ebbing, Missouri" accept the award for outstanding performance by a cast in a motion picture at the 24th annual Screen Actors Guild Awards at the Shrine Auditorium & Expo Hall on Sunday, Jan. 21, 2018, in Los Angeles. [Photo: AP]

In an unusually critical statement, SAG-AFTRA said it has received multiple reports that the Academy of Motion Picture Arts and Sciences is pressuring certain actors to appear only at next month's Academy Awards. Several award shows occur before that, including the guild's own Screen Actors Guild Awards on January 27.

"This self-serving intimidation of SAG-AFTRA members is meant to limit their opportunities to be seen and honor the work of their fellow artists throughout the season. Actors should be free to accept any offer to participate in industry celebrations," SAG-AFTRA said in a statement. "The apparent attempt by the academy to keep our members from presenting on their own awards show is utterly outrageous and unacceptable."

"We call on the academy to cease this inappropriate action," it concluded.

Messages left with the academy were not immediately returned Monday.

Following Kevin Hart's departure, the Academy Awards remain without a host. With less than six weeks to go before the Feb. 24 broadcast, they appear likely to remain that way. To compensate, the film academy has apparently sought to populate the telecast with starry presenters. One reported gambit has been to unite the "Avengers" cast at the Oscars.

The open feud with SAG-AFTRA is only the latest headache for the film academy. It is seeking to revamp this year's Oscars telecast after ratings fell steeply in 2017. The academy earlier scuttled plans for a new best popular film category after a backlash.