Nguyen Duc Tang, an independent consultant from Vietnam had just finished his first seal engraving work. He tried to put the four letters of his surname (TANG) onto a surface less than 6 square centimeters. 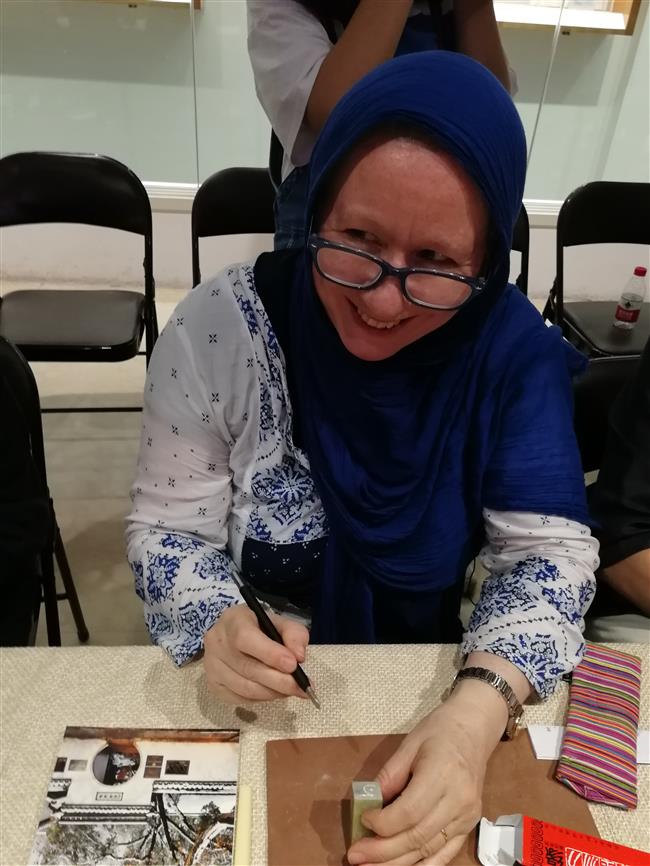 A foreigner tries to carve on a seal stone during a workshop at the China Seal Art Museum. (Photos: Shine.cn)

But when transferred on paper, it turned out to be a mirror image of what it was supposed to be. “Ah, I made it in reverse,” he burst into laughter. 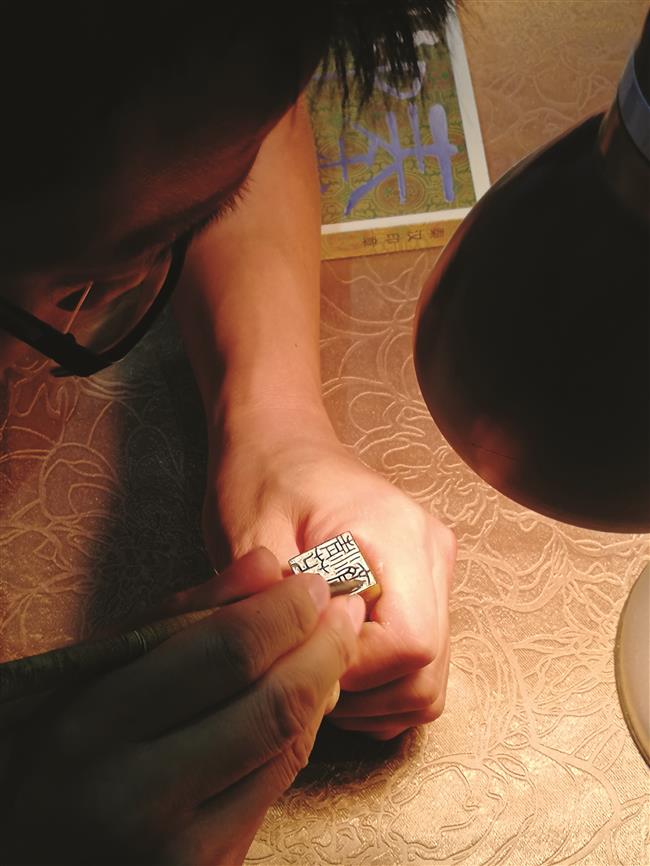 Tang was attending a trainers’ workshop in Hangzhou to enhance capacities for safeguarding intangible cultural heritage worldwide. Recently, 22 participants from 21 countries in the Asia Pacific Region did field research in typical masterpieces of local intangible heritage including Kunqu Opera and seal engraving.

The seal engraving workshop was held at the China Seal Art Museum, an affiliate of the Xiling Seal Art Society, which is the oldest and most influential art group in China dedicated to seal engraving, traditional Chinese painting and calligraphy. Lai Yishi, a professor from Zhejiang University and a member of the Xiling Seal Art Society, was the mentor for the workshop. A group of his students showcased how these tiny and intricate artworks were made.

To produce a qualified impression on paper, you need to spend time designing a pattern (including the text, the script and the style) on semi-transparent draft paper. Then turn the paper over, and place it on top of the seal surface where you’re going to work.

Use an ink brush to delineate your pattern on the seal stone and the rest is all about carving.

“It usually takes about two hours to finish,” said Ye Lu, one of the seal engravers at the workshop and a student of Lai. “Very experienced artists sometimes skip drafting and work on seal stone directly.”

But seal art is more than just carving. A seal engraving artist needs to have sufficient knowledge on ancient Chinese scripts from the oldest oracle bone script to large and small seal script commonly used during the first century BC.

“Pan Tianshou (a Chinese ink-wash painter and former vice chairman of the Xiling Seal Art Society) used to say that zhuanke (篆刻, seal engraving) is an art at the tip of the ivory tower,” Lai told Shanghai Daily. “It is more difficult to appreciate and to study than traditional Chinese painting and calligraphy.”

The earliest seals in China dated back to the Spring and Autumn Period (770-467 BC) when they were used for functional reasons as a means of authentication. It was not until the Song Dynasty (960-1279) that seal art started to be independent from paintings and calligraphy and became an emblem of literati spirituality.

“Before Zhao Mengfu, a painter and calligrapher in the Yuan Dynasty (1271-1368), seals were made by craftsmen,” Lai said. “Zhao drafted his own design and handed it over to the craftsmen.

“During the Ming Dynasty (1368-1644), people like Wen Peng (son of Wen Zhenming, one of the four masters of painting), tried engraving themselves on softer stone surfaces. These scholar-officials endowed the art with a sense of poetry and personality.”

Seals made by the intellectuals for aesthetic reasons are called xianzhang (闲章, a free-style seal), which usually carry words or phrases borrowed from poems and verses as a way of self-reflection or self-proclamation.

The two characters that Ye Lu was carving during the workshop, were zhenshang (真赏), referring to the real appreciation by a true friend that knows you well.

Being an art teacher and studying seal art for more than 10 years, Ye was one of the 20 students enrolled in Lai’s seal engraving program that has lasted for a year.

“It was the first time that such a master like Lai opened a class. When I met him in a lecture about three years ago, he was still not sure about the idea,” said Ye.

Members of the class come from a variety of backgrounds, with an age group ranging from 20 something to 50 something. They are college students, art teachers, presidents of art training schools and also lawyers and businessmen.

The syllabus shows that participants need to learn about different carving skills and historical schools of the Ming and Qing (1644-1911) dynasties. But they also touch upon contemporary issues such as aesthetic transition in such an male-dominated art and the revolutionary future of simplified Chinese characters.

“It’s just hours of daily practice,” added Ye, who said she spent four hours from 8pm to midnight on practicing. “I’m enchanted by the sound of the knife striking on stone at night.”

Like all intangible cultural heritage, seal engraving is also faced with the problem of inheritance and preservation.

Li Yan from the Xiling Seal Art Society told Shanghai Daily that it now has over 500 members nationwide. And they take in around 20 new members each year. To be admitted into the society is not easy. Applicants will have to submit their own seal works and pass an on-the-spot test judged by committee members of the society. References are also important.

Although many masters in seal art were also great painters or calligraphers, at the art society the ability to make seals is the only standard. There is no restriction on age, profession or educational background.

Since 2013, 14 members of the society have hosted programs teaching seal art to 345 non-members. Eight of them were admitted into the society after the program while 26 joined the Xiling Member’s Club.

Lai is not worried about the skills being passed on.

“I don’t think you need to intervene to keep it alive,” he said. “Things that are not good enough will disappear.”

At the end of the workshop, Nguyen Duc Tang took a photo of his first seal work together with the Chinese mentor.

“I think it’s really impressive,” he said. “It’s an art of the past. I think it used to serve only the king or maybe the elites. But it’s still relevant because people are fond of it. They have a really strong community and they want to use it. That’s amazing.”