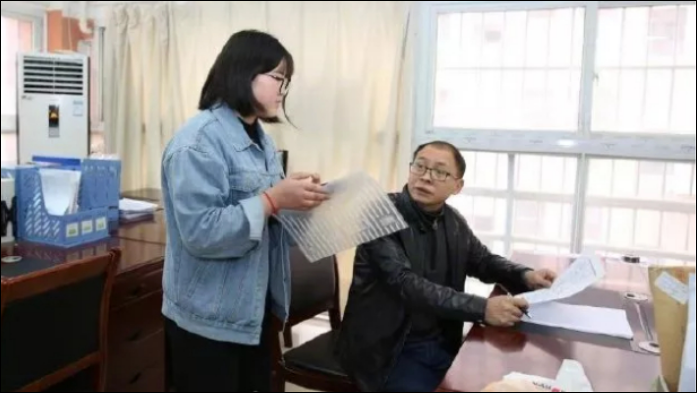 Over the past 20 years, more than 500 security guards working at Peking University, one of the top universities in China, have successfully acquired associate degrees, according to a report by People's Daily.

Twelve of them went on to gain master's degrees and teaching positions at vocational schools.

One of the best-known cases of a security guard, who dropped out school early but later excelled in formal education, is that of Li Mingyong, who secured his doctorate this summer and started a new job as a university lecturer at the age of 41.

From a security guard to a lecturer at the same university, his confidence, courage and persistence made his dream come true.

After quitting high school at 16 on financial grounds, Li first worked on a construction site. After paying off his family debt, he became a security guard at Guizhou Education University in southern China.

Inspired by the atmosphere at his new job, Li resumed his studies in his spare time and got an associate degree and then a bachelor's degree.

"I hope I could be a teacher, but the bachelor's degree is not high enough," Li told Beijing Youth News. Then, he decided to get a master's degree.

To prepare the exam and to pass through the English test, of which he had precious little knowledge, he memorized a dictionary of 8,000 words and read as many books as possible.

Li's hard work was finally paid off and he was enrolled at his third attempt in the master program of aesthetics at Guizhou University. To support himself, he also worked as a part-time tutor.

Throughout his whole postgraduate study, Li went to the library at 7 a.m. and studied after midnight.

"I know how much work teacher Li has done. He worked full time at school and dedicated most of his time to helping us. Meanwhile, he had to prepare his doctorate candidate exam and take care of his family," Luo Yueming, a student of Li, said.

In 2015, Li was admitted to the doctoral program at Central China Normal University. After graduating this summer, Li went back to the school where his life has changed, Guizhou Education University.

But his time, his position had changed to a lecturer.

"Everyone can have a target and try to approach it. Persistence will help you get nearer to the target, even you may not reach it in the end," he said.