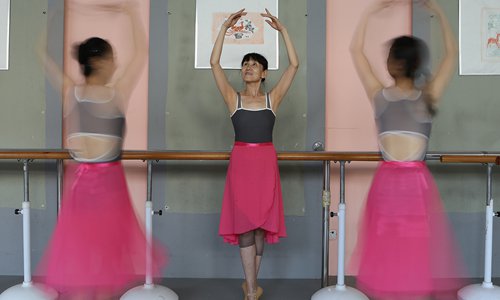 Du Youling (center), 62, head of a ballet troupe, practices with two members in a practice room at a cultural center in Zhengzhou, Central China's Henan Province on September 9. (Photo: VCG)

Twenty-eight grandmas with an average age of 56 have formed a ballet troupe at a cultural center in Jinshui district, Zhengzhou, Central China's Henan Province. It is the only troupe in the province exclusively for senior citizens.

The oldest member of the troupe is 63 years old, and none of the members has any previous experience of learning ballet. Since the troupe was established, they have had to go to at least three training sessions a week. No one has missed a single practice.

After nine months of training, they can now stand on tiptoes and are good enough to put on a performance. They have also taken part in many competitions in Henan and won several medals.

Xu Yuanyuan, who is a member of the troupe, said, "Ever since I started dancing ballet, I have been in a good mood and enjoyed good health. Ballet dancing helps me keep my figure."