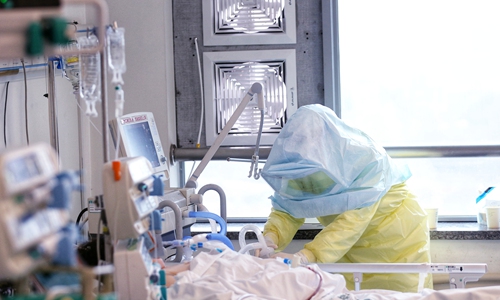 An image of eight top clinicians who are continuing to treat critically ill COVID-19 patients in Wuhan, Central China's Hubei Province has gone viral, with netizens dubbing them the "Eight Immortals of the Intensive Care Unit (ICU)."

The Eight Immortals are legendary figures in Chinese mythology which bestow life and vanquish evil. Giving the eight senior medics this nickname represents Chinese netizens' respect and appreciation to those who have remained behind to treat patients still in the ICUs in Wuhan, even after many healthcare workers have left the frontlines to return to their home provinces.

As of April 6, around 38,000 medical workers dispatched from other provinces to support Wuhan had left the city, according to the National Health Commission (NHC).

There are still nearly 1,000 medics and experts from across the nation continuing to treat seriously ill patients in Hubei, the NHC said.

One of these "Eight Immortals" is Zheng Ruiqiang, director of the ICU at Northern Jiangsu People's Hospital, who arrived in Wuhan on January 23 when the city was locked down. Zheng was part of the first group of senior medics who came to lend their expertise in the fight against the novel coronavirus.

With expertise in the fields of organ function support, acute respiratory distress syndrome, severe infection therapy and clinical nutrition, Zheng was tasked with treating patients in the ICU at Wuhan Pulmonary Hospital, one of the first hospitals designated to treat patients with COVID-19.

"There are still eight patients in the ICU I'm working in. I'm mainly responsible for designing individual treatment plans for each patient," Zheng told the Global Times on Wednesday.

He said that around 78 percent of seriously ill patients have been discharged from his wards since his arrival.

In the early stages of the pandemic, Zheng visited other designated COVID-19 hospitals to triage critically ill patients so they could receive more intensive care and targeted treatments.

As the outbreak is being brought under control and therefore there is a sharp decline in the number of patients, Wuhan has sufficient healthcare workers and medical resources to deal with the remaining patients, Zheng told the Global Times.

"Lifting the lockdown in Wuhan won't cause a significant increase in the number of patients in severe condition, because our policy is to screen for the virus before people return to work, thereby putting the focus on prevention to relieve the pressure on frontline medics," he said.

"However, the patients we're still treating in the ICU are in critical condition, so the main challenge is to inhibit the complications of COVID-19. About 20 percent of patients admitted to the ICU are being treated with Extra Corporeal Membrane Oxygenation (ECMO)," Zheng said. ECMO is the treatment of last resort.

For frontline medical workers, treating patients with ECMO and tracheal intubation puts them at high risk of infection due to close contact with the patients' airway secretions which carry the virus.

The novel coronavirus can spread through aerosol transmission if a person is exposed to an enclosed environment with a high concentration of aerosol for a long time, according to the NHC.

"In the case of more dangerous situations, in order to protect younger staff, we've tried to operate by ourselves," Zheng, a medical veteran who also fought against the SARS outbreak in 2003, was quoted as saying by media.

In the ICU, Zheng likes to ease the nerves of younger medical staff by telling light-hearted stories. "Our job in the ICU is to save lives and race against death," Zheng said. "It is more than important to maintain optimism and hope in such a depressing work environment."