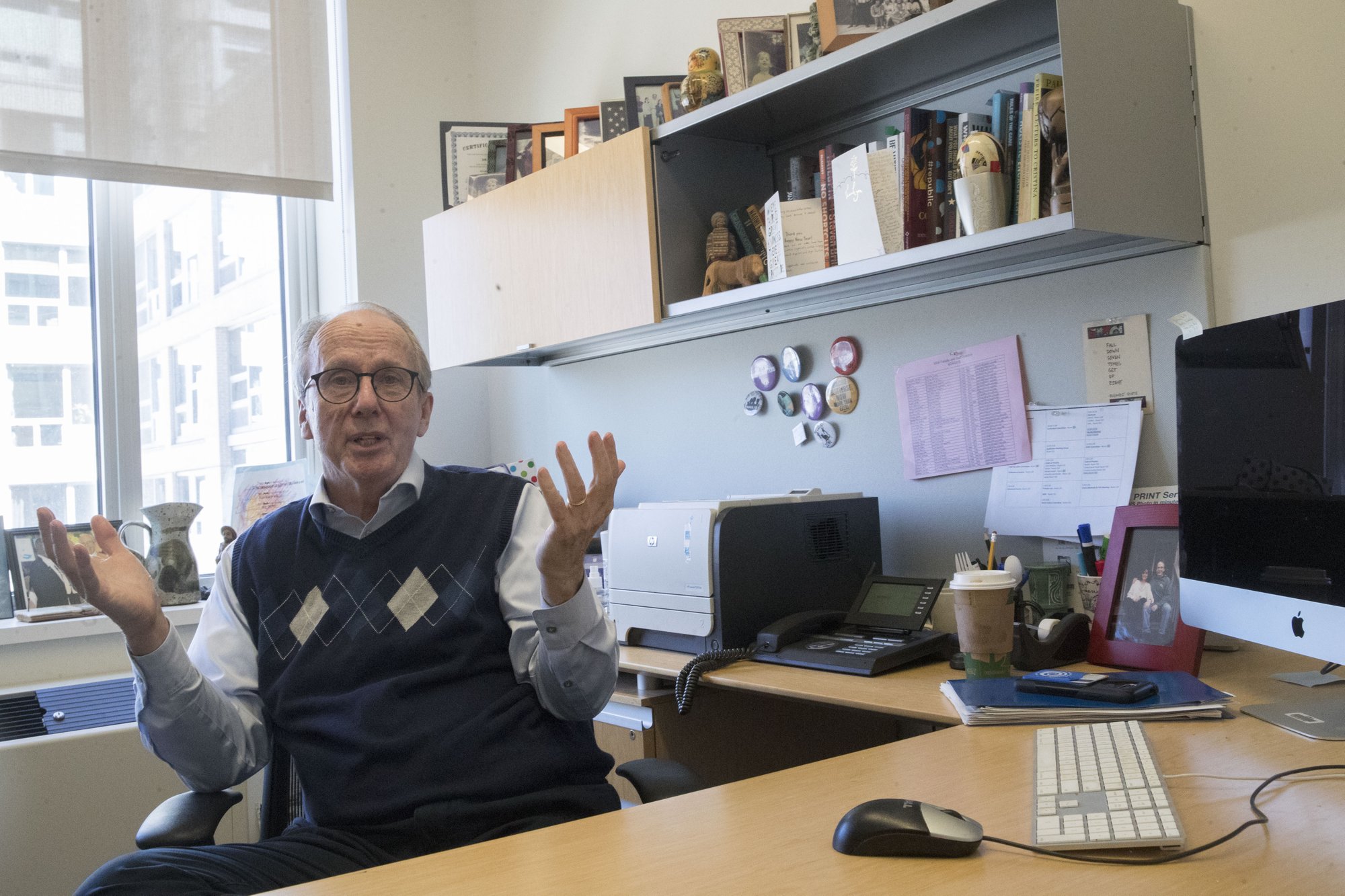 Steve Burghardt, a professor of social work at the City University of New York, gestures as he speaks in his office at Hunter College's Silberman School of Social Work on April 16, 2019. Seniors in major metropolitan areas, especially in big Northeastern cities and around Washington, D.C., are more likely to continue working past 65 than those in other areas around the country, according to an analysis of Census cata by The Associated Press and the NORC Center for Public Affairs Research  (Photo: AP)

Seniors in major metropolitan areas, especially in the Northeast and around Washington, D.C., are more likely to continue working past age 65 than those in other areas around the country, according to an analysis of Census data by The Associated Press-NORC Center for Public Affairs Research.

“Those are the areas where all of the jobs are, really,” says Anqi Chen, assistant director for savings research at Boston College’s Center for Retirement Research. “The coastal areas recovered well from the recession, while other areas have not.”

But it’s also the types of jobs in those areas — government, finance, law and academia — that keep seniors working longer, analysts say.

Older workers can be a boon to regional economies, increasing tax revenues, stimulating growth with more consumer spending and providing additional talent and expertise at a time of low unemployment, says Paul Irving, chairman of the Milken Institute Center for the Future of Aging.

Among counties with at least 6,000 residents, about 12% have at least 21% of their seniors working or actively looking for jobs, according to an analysis of the Census’ 2017 American Community Survey report. Of that group, nearly 25% are located within the Northeast or in Maryland or Virginia. And nearly 15% are within 70 miles (113 kilometers) of New York, Boston, Philadelphia or Washington, D.C.

“I consider myself to be a very fortunate person to still do what I loved at 27 at 74,” says Steve Burghardt, a professor of social work at the City University of New York. “I feel advantaged being in New York, where you’re exposed to sights and sounds and differences that are always exposing me to new ways to understand myself and to learn from other people.”

Two Washington suburbs, Falls Church, Virginia, and Alexandria, Virginia, are among the nation’s leaders in terms of senior labor force participation, with rates of nearly 37% and nearly 30%, respectively. This area is also home to one of the fastest growing senior labor forces in the country — three of the 11 counties that saw senior participation rates climb the fastest between 2009 and 2017 are located within 70 miles (113 kilometers) of Washington.

But large, populous counties don’t have a monopoly on senior participation in the labor force.

Vermont, one of the least populous states, holds two counties that rank among the top 100 (Windham and Washington counties) and eight among the top 329 in terms of senior participation.

“Despite whatever misnomers might exist, there is a great demand out there for mature workers,” says Mary Branagan, director of program and partner affairs at Associates for Training and Development, a workforce training and development outfit headquartered in Vermont.

Branagan helps oversee the state’s Senior Community Service Employment program, which matches qualifying unemployed state residents at least 55 years of age with paid internships that can help them update their skills and remain in the workplace longer. She says her company’s offices in Washington and Windham counties are among its largest statewide.

In other areas of the country, Colorado has six of the top 50 counties both in terms of senior labor force participation in 2017 and participation growth between 2009 and 2017.

And rural counties heavy in agricultural employment, especially in Kansas, Nebraska and Iowa, boast a considerable senior labor participation rate. Though the jobs are often labor intensive, agricultural professions maintain some of the highest median ages in the country, according to Bureau of Labor Statistics data.

That’s due in part to much of U.S. agriculture being concentrated in family farms, the Department of Agriculture says. People can continue living and working on these operations well into their “retirement” years by scaling things down and renting land to other farmers.

At the other end of the spectrum, senior labor force participation in 2017 was less than 12% in nearly 14% of counties with at least 6,000 residents. Kentucky, Michigan, Georgia, Alabama, Florida and West Virginia collectively accounted for more than 50% of those bottom-ranking counties in terms of senior labor participation.

Senior participation contracted in more than 24% of counties between 2009 and 2017. Nearly 33% of those counties are located in Georgia, Texas, Missouri, Kentucky or North Carolina.

Experts say it’s these lower-ranking counties that are missing out on the potential benefits of a stronger senior labor force. These areas also stand to benefit most from targeted skills training investments and other initiatives that would spur seniors off the sidelines.

Chen notes manufacturing-heavy areas within the Rust Belt and in states including Alabama and Georgia are among those with the lowest senior labor participation. Manufacturing payrolls have plummeted over recent decades amid automation and globalization challenges. Labor-intensive jobs that are prominent in those areas often preclude folks from working later into life, and the types of white collar jobs that are more prevalent in larger cities are in shorter supply.

“It’s partly just how grim the job prospects are in a lot of micropolitan, or small city and rural, areas,” says Gary Burtless, a senior fellow at the Brookings Institution. “A lot of them are one-industry towns. And if that industry has been hit hard, that’s going to be a problem for younger workers and older workers.”

“The thinking as to why highly educated people tend to work longer is that they may enjoy better health. They may enjoy better working conditions,” says Jen Schramm, a strategic policy adviser for the AARP Public Policy Institute. “They are likely to be paid more, so that’s more of an incentive to keep working.”