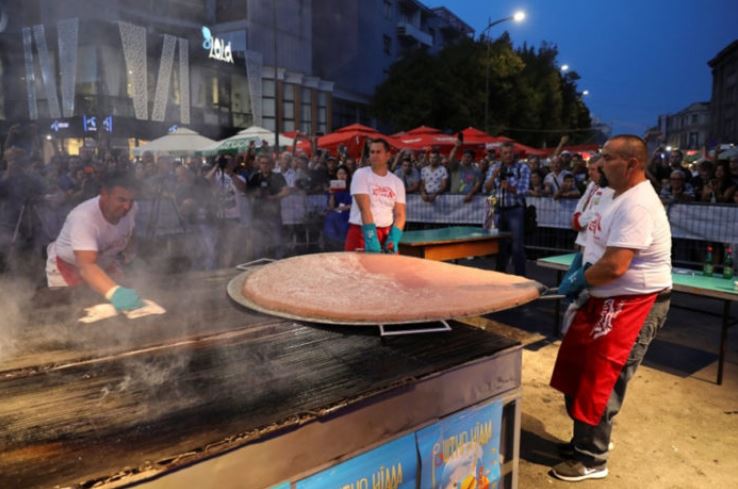 LESKOVAC, Serbia, Aug. 29 (Xinhua) -- Grill masters from Serbia's southern city of Leskovac once again succeeded in beating their own record in world's biggest "pljeskavica" burger on Thursday at the annual Rostiljijada barbecue festival.

In front of thousands of visitors at festival's main stage in downtown Leskovac, chefs of a local restaurant made pljeskavica burger out of 66.5 kilograms of meat -- three times bigger than the first one made 30 years ago at the first edition of the festival.

Before grilling, the burger was 1.9 meters in diameter and 2.5 cm thick, and it was handled by three local chefs -- Predrag Lazarevic, Ljubisa Djordjevic and Nikola Panic -- who have been breaking their own record for the past several years.

To the amusement of audience, the grill masters excelled at spreading the meat on the gigantic grill, turning it over without breaking, and then laying it on a huge piece of bread.

When grilled, the burger weighed 66.25 kilogram and was 1.7 meters in diameter. After judges measured the burger, it was cut and shared to spectators for their assessment.

Leskovac, a city of around 60,000 people since August 26 hosts the 30th edition of the festival this year with several hundred thousand people expected to visit during seven festival days.

Many of them came here to try out local "pljeskavica" burgers and "cevapcici" skinless sausages which are popular across the Balkans, but the recipe here in Leskovac is branded as the best across the region, winning international recognition for this local type of barbecue.

The festival opened its 30th edition on Monday with the concert of famous folk star Lepa Brena and will take place until Sept. 1.