A fired-up Serena Williams slugged past world number one Simona Halep Monday as she inches ever closer to a 24th Grand Slam title on a day that saw Alexander Zverev implode at the Australian Open. 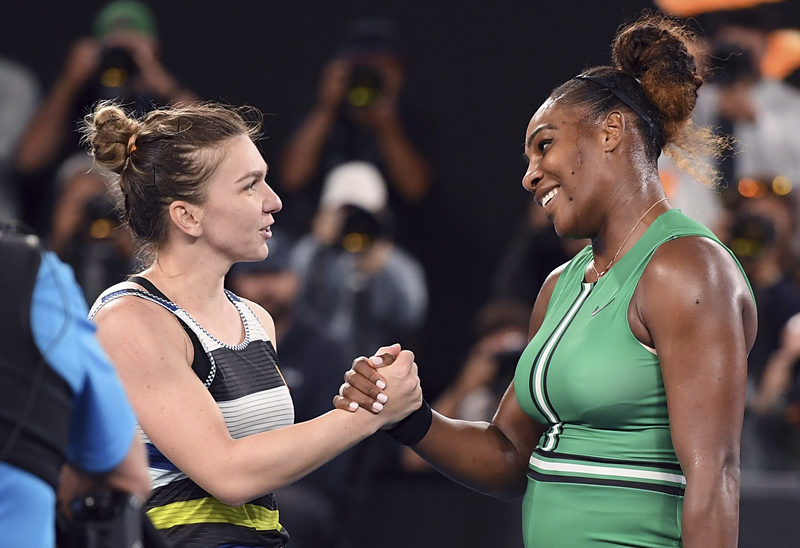 In a towering performance, the American great scored her biggest win since giving birth to break down the Romanian top seed 6-1, 4-6, 6-4 and move into a quarter-final against seventh seed Karolina Pliskova.

Czech Pliskova is another form player, winning the warm-up Brisbane International and easing past two-time Grand Slam winner Garbine Muguruza 6-3, 6-1 to set up the Williams clash.

"I'm such a fighter, I never give up," declared Williams after the epic encounter.

"It was an intense match and there were some incredible points but I love playing tennis and being out here and I love this court, it's really cool to be back."

Women's fourth seed Naomi Osaka was more composed as she beat crafty Latvian Anastasija in three sets to set up a meeting with ambitious Ukrainian Elina Svitolina for a place in the semi-finals.

But it was the dominant Williams who overshadowed them all and is overwhelming favourite to win an eighth Australian title, with defending champion Caroline Wozniacki and second seed Angelique Kerber already out.

She has been in ominous form at Melbourne Park as she seeks one more major title to put her alongside Margaret Court's record 24, and it looked like French Open champion Halep would be another easy scalp after a first set rout.

But the nuggety Romanian isn't world number one for nothing and she bounced back to set up a huge power struggle that Williams finally won with a break in the seventh game of the third set.

"I really needed to elevate my game. She's a great player," said Williams.

Fourth seed Osaka emerged from an error-strewn first set against Sevastova to win 4-6, 6-3, 6-4.

"I think the biggest thing for me is the belief. I think I believe in myself more this year than I have last year," said the bubbly 21-year-old, who beat Williams in the US Open final last year.

She next faces sixth seed Svitolina, who battled past American Madison Keys 6-2, 1-6, 6-1.

It will be a new experience for whoever wins that showdown, with neither going beyond the quarter-finals at Melbourne Park before.

Svitolina needed to dig deep to overcome 17th seeded Keys, a US Open finalist in 2017.

"I had to put my level up, I'm glad I handled the pressure," said Svitolina, who scored her biggest career win at the WTA Finals in Singapore last October.

Svitolina was a quarter-finalist at Melbourne Park last year and has set her sights high after her breakthrough in Singapore, targeting a Grand Slam win and world number one.

Earlier on Rod Laver Arena, Zverev self-destructed to slump out at the hands of Raonic.

The German has routinely been anointed as the flag-bearer for the next generation, but again failed to live up to his reputation and has now missed out on making the last eight of a major 14 times in 15 attempts.

So furious was he with his form, the 21-year-old had a major temper tantrum in the second set, whacking his racquet into the ground eight times to leave it a crumpled mess.

"I just tried to stay composed and it worked out well for me today," said cool 16th seed Raonic, who will now face Frenchman Lucas Pouille after he battled past Croat Borna Coric in four tough sets.

Six-time champion Novak Djokovic, who was taken to four sets by teenage Canadian Denis Shapovalov in the third round, plays later against another young gun in Russia's Medvedev, seeded 15.

The winner will have a quarter-final against Japan's eighth seed Kei Nishikori or Spain's Pablo Carreno Busta.