CULTURE Serenity: Splendor in the Air

Serenity: Splendor in the Air

Chinese designer Grace Chen launched her 2019 Spring and Summer collection with the theme "Serenity: Splendor in the Air" on Tuesday, the second day of this year's China Fashion Week at the Beijing Hotel. 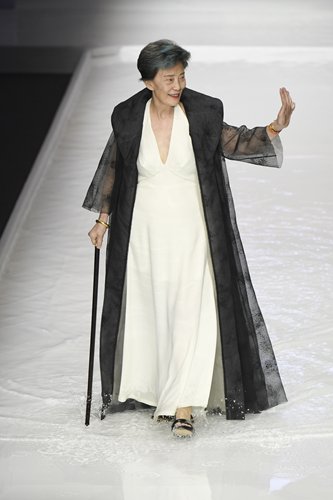 Chen, whose Chinese name is Chen Yehuai, studied at both the Beijing Institute of Fashion Technology and New York's Fashion Institute of Technology. Before setting up her self-named haute couture brand in 2009, she had worked for fashion studios in the US such as Halston and Tadashi Shoji.

She has been called "The Power Dresser of China" and "China's Most Sought-After Couturier" by media and fashion reviewers. Her clients include TV and film stars, businesswomen and politicians, an elite female group representing elegance and confidence in femininity.

Having pondering Chinese and Western culture for decades, she has developed her own unique understanding that is reflected in her clothing designs.

"I used to think I was creating an 'East-meets-West' style. But now I see more clearly. I think women all over the world are the same. They are both vulnerable and powerful at the same time," said she on her brand's website. 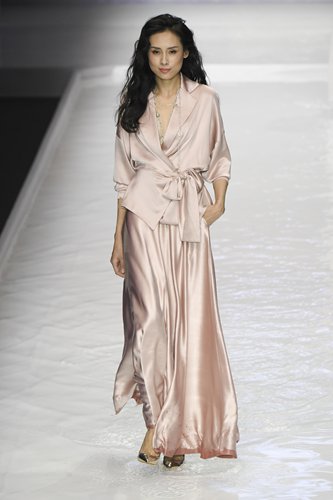 A model takes to the runway for the Grace Chen show.

To capture the serene image of Chinese women at her China fashion show, the designer covered the catwalk with a shallow layer of water, a symbol in traditional Chinese culture of women's tender yet  indomitable nature.

Echoing the theme of "Serenity: Splendor in the Air," the fashion show kicked off at 7 pm with an elegant ballet solo performed by Chinese dancer Sisi Qiu, often called the "Oriental Swan Princess."

Matching the elegance of the ballet, the design of the clothes showed off feminine grace through tailored lace, glistening silk with flying tassels and sparkling sequins.

An influential figure in female fashion design, Chen invited some of her well-known friends, a lawyer, painter, actress and entrepreneur to participate in the show. A model takes to the runway for the Grace Chen show.

For example, the 72-year-old  former Asia-Pacific president of the Ford Modelling Agency Grace Han, who is often referred to as "Auntie Han" in China and the Chinese godmother of modeling, took to the watery catwalk with a black cane and wearing a slim white ankle-length dress and long black overcoat. The elderly entrepreneur showed a bit of playfulness by splashing around in the water a bit with her feet, a cute sight not ordinarily seen as serious fashion shows.

Other Chinese haute couture designers who are showcasing their works at China Fashion Week, which is scheduled to come to an end on March 31, include Guo Pei, Laurence Xu and Xiong Ying.