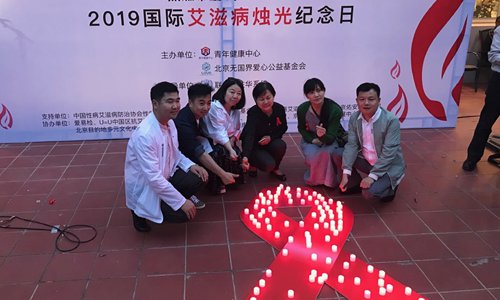 Members of the community and volunteers for people living with HIV pose for a group photo at the International AIDS Candlelight Memorial in Beijing on Sunday. (Photo: Global Times)

Chinese experts called for sex education for adolescents after the latest data shows around 3,000 newly infection cases of HIV/AIDS among students were reported every year from 2016 to 2019.

People aged between 15 and 24 were diagnosed of HIV/AIDS in China every year from 2016 to 2019, according to data released at a youth AIDS prevention education forum in Beijing on Saturday.

Fan Zemin, a researcher from the Department of Physical, Health and Arts Education of China's Ministry of Education, said students aged between 15 and 24 diagnosed of HIV/AIDS account for 17 percent of all infections among young people of the same age.

"Although the total number of infected students is small, adolescence is an important stage of mental and physical development. If the students do not master scientific knowledge or are not aware and able to protect themselves, unhealthy behavior will lead to serious consequences to their health," Li Bin, a vice head of the National Health Commission, said at the forum.

Many experts and teachers called for sex education and AIDS prevention education in the compulsory education system.

Due to cultural factors, Chinese parents and teachers are ashamed to talk about sex, which is why the popularization of AIDS prevention education and sex education has progressed slowly in China, experts said.

Wu Jiang, a project director from the AIDS Prevention Education Project for Chinese Youth (APEPCY), said some parents link sex education to negative sex-related social phenomena, which leads them to avoid talking about the topic with their children.

"Authorities have done much work to inform the public of the transmission of HIV/AIDS through blood and mother-to-child. So we are finding another way to promote HIV/AIDS prevention through sex education," Wu told the Global Times on Tuesday.

APEPCY is a nonprofit organization established by the China Charities Aid Foundation for Children and the Chinese Society of Education to promote sex education in schools to help prevent HIV/AIDS transmission among the youth.

Established in 2006, APEPCY has sponsored 1,100 AIDS prevention cabins or "Youth Love Cabins" in 26 provinces and municipalities to promote HIV/AIDS prevention and sex education through videos and activities.