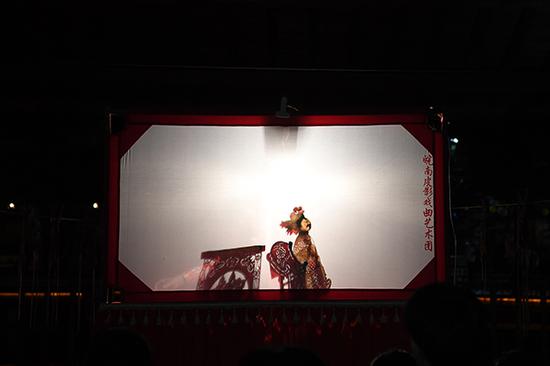 Performances of a fading art form add a special flavor to the Wuzhen Theater Festival.

People snap photos and clap as a mime performs on a street corner. A group of young theater students present impromptu performances on another.

These scenes in Zhejiang province's 1,300-year-old water town, Wuzhen, played out amid the Wuzhen Theater Festival, which has drawn visitors and artists from around the world to live shows at indoor and outdoor venues every October for the past five years.

This year, 22 shows and 11 workshops presented by the Wannan Shadow Play and Opera Art Troupe, a group of five shadow-puppet artists from Anhui Province's Xuancheng city (Wannan refers to the southern part of Anhui), were the highlights of the festival. 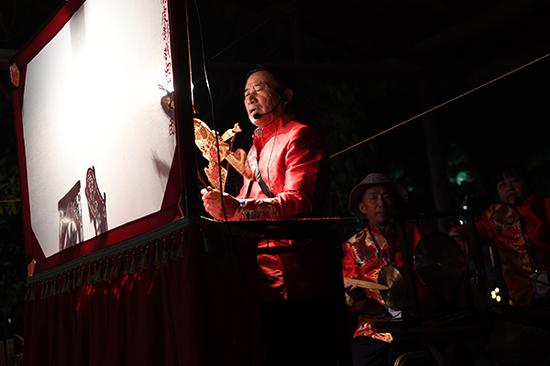 The performers, who range from ages 52 to 80, played such musical instruments as cymbals, gongs and drums, and operated over 100 handmade puppets outside the White Lotus Pagoda, built between 1102 and 1106.

The group sang and told stories in their hometown's style and dialect. Their repertories have been passed down for generations and include tales from the iconic novel Journey to the West by Ming Dynasty (1368-1644) writer Wu Cheng'en and Generals of the Yang Family from the Song Dynasty (960-1279).

"It's our first time to perform at the Wuzhen Theater Festival. I guess we're the most elderly troupe," says the group's 52-year-old leader, He Zehua, who's a ninth-generation shadow-puppet performer.

"You can hear folk songs and Anhui's local Huaguxi Opera at our performances," He says.

He recalls watching his grandfather make puppets and perform for Xuancheng's residents. 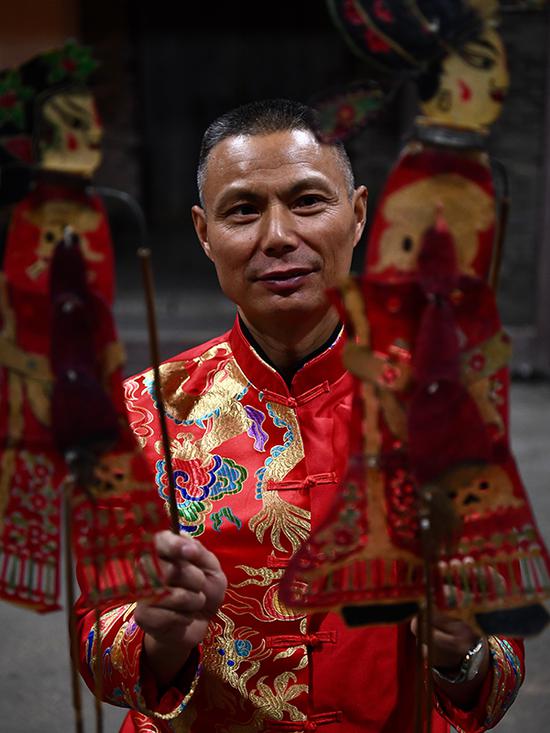 "While I was growing up, shadow puppets for me were like what Transformers toys are for today's kids," he says.

As a boy, he helped his grandfather wash and remove the hair from the animal skins used to make the puppets. It takes at least six months to dehydrate and degrease the skins.

"Grandpa told me buffalo skin is the best to make shadow puppets since it's durable and easy to color," He says.

"I liked sitting beside my grandfather, watching him cutting the puppets out of paper with over 10 knives of different sizes and then using minerals to dye different characters. He told me stories about each character while he was working."

He's parents didn't work as shadow-play artists. He quit his job at an architectural firm and formed a troupe in 1999.

His two children work in white-collar jobs in bigger cities, he says.

"This family tradition would be dead if I hadn't founded this troupe," He says.

"That would be shameful."

Troupe member Zheng Yuanqing, who joined He's troupe in its first year, says there were about 60 shadowplay troupes in southern Anhui decades ago. But theirs is now one of two left.

Zheng has practiced the art for half a century.

"We want to revitalize this art form. But we're old," the 74-year-old says.

"We need young people to carry on this legacy from our ancestors."

His troupe performs at the museum every weekend, in addition to touring nearby cities.

He also teaches students from two local primary schools about the puppets and hosts workshops guiding the children to make their own.

"It's enough if they remember the art form when they grow up," He says.

His favorite stories come from The Generals of the Yang Family.

"They're about loyalty, bravery and sacrifice to defend country and family," he explains.

"Those are virtues from traditional Chinese culture that are also important for today's children. They can learn these virtues from shadow play."