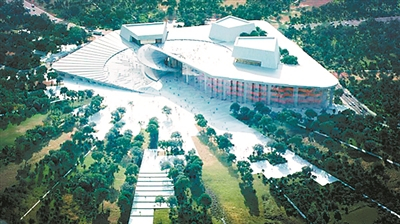 Shanghai will build a grand opera house, next to the site of the 2010 World Expo on the bank of a turn of the Huangpu River, as the city's new landmark.

Following an international design competition, Snohetta, a Norwegian architectural design institution, has been commissioned to design the Shanghai Grand Opera House, in partnership with Shanghai-based institute of ECADI.

According to Snohetta, the opera house to be built by 2023 will have a helical roof surface evoking the imagination of a white unfolding Chinese fan or the skirt of a dancer.

The opera house is designed with three auditoriums with 2,000 seats, 1,200 seats and 1,000 seats, respectively. The roof can be used for large outdoor shows.

Snohetta has designed several opera houses including the Norwegian National Opera and Ballet, the Busan Opera House in the Republic of Korea, among others.