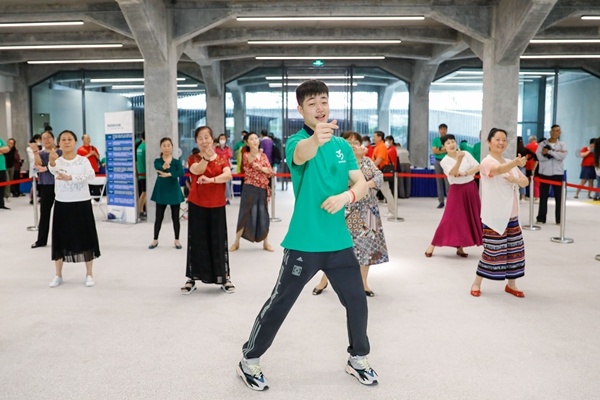 Residents at a community center in Yangpu district, Shanghai, are energetically led by a fitness expert in their physical exercise class. (Photo provided to China Daily)

Sporting greats Wang Liqin, one of the most successful table tennis players in history, and Zou Kai, a five-time gymnastics Olympic champion, were among experts present at the June 10 launch of the new social service project aimed at helping citizens manage their physical and mental health.

Launched by the Yangpu District Committee in conjunction with the Party Committee of Shanghai University of Sport, the project kicked off at the former site of the Minghua Sugar Storehouse in Shanghai's Yangpu district.

Athletes, physical and mental health consultants and students from the Shanghai University of Sport were on site to offer psychological counseling as well as guidance on matters such as sports nutrition, fitness and injury prevention.

Following the launch, these services will be made available to residents for six weeks at grassroots community service stations in 12 neighborhoods in the district.

The initiative will also feature 13 themed courses catered to different age groups in the community. They include martial arts exercises, rehabilitation activities for the elderly, dance classes, as well as physical and mental health courses. All courses are free.

"Many residents, especially the elderly, neglect their health and do not like to go to the hospital for physical examinations unless they are sick, when in fact their body functions are deteriorating," says Yang Yang, 25, a master's student majoring in sports psychology at the Shanghai University of Sport.

Yang points out that many elderly residents also suffer from mild depression, but most think it is unnecessary to seek help from a hospital. The cause of this depression, he adds, is loneliness.

"When I was at the event, an old woman said that she was lonely as she lives by herself and her children are always busy. To deal with this, she had to find someone to talk to at the neighborhood committee," Yang says.

Shen Wei, secretary of the Party Committee of the Shanghai Education Commission, says that there is an urgent need to establish a system that can prevent noncommunicable physical and mental diseases in the wake of the COVID-19 pandemic.

The concept of introducing sport and health consultants to the communities came up during the pandemic when many people were stuck at home and unable to exercise, says Gao Binghong, director of the School of Physical Education and Sports Training at the university.

"Some modern health conditions like fatty liver are caused by a sedentary lifestyle and a lack of exercise, and this was exactly the case during the pandemic. This is why we had the idea to help the public through specific exercises," says Gao.

"After the viral outbreak, the district government of Yangpu decided to cooperate with us and set up the sport and health consultancy project as a way of improving public health by guiding residents how to eat, exercise and practice disease prevention."

As the demand for sport and health talent is on the rise, the university is planning to introduce a new major to train professional health consultants, Gao says.

"There will be a great demand from the community for health consultants, because people care more about the quality of life now compared with a decade ago," he says.