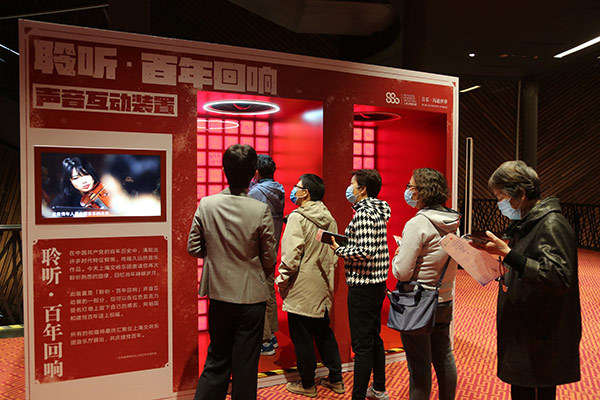 Visitors prepare to enter an interactive audio installation in Shanghai. The Shanghai Symphony Orchestra has erected these installations in each of the six cities on its tour, inviting audiences to listen to vintage recordings of celebrated revolutionary music. (Photo: China Daily)

The centennial celebration for the founding of the Communist Party of China will be a major highlight at the 37th Shanghai Spring Music Festival, which will take place from April 28 to May 10.

Established in 1960, the festival is hosted by the municipal cultural and tourism administration. This year's edition will feature 26 concert productions and two dance shows, the majority of which will be presented by artists and groups from Shanghai.

The event will commence with an outdoor performance on the stairs in front of the theater, where dozens of young violinists will play Sing A Song for the Party, composed by Zhu Jian'er in 1963. This will be followed by a series of workshops, dialogues with artists and video events.

The performance, as well as other activities of the day, will be livestreamed on more than 20 web platforms.

At the opening concert starting at 7:30 pm, leading performing art institutions in the city, such as the Shanghai Opera House, Shanghai Ballet, and the Shanghai Chinese Orchestra, will present a gala show. With the help of livestreaming and video-sharing technology, the Chinese music groups will collaborate with renowned overseas institutions such as the Orchestra de Paris in France, Opera Australia and the Israel Camerata Jerusalem.

According to Feng Lei, director of the Shanghai Conservatory of Music, the music school had, since last October, brought together all the departments and kicked off rehearsals for a new production of the suite, which consists of a series of chorus pieces created in 1965 depicting the Red Army's Long March in 1934-36.

The production subsequently embarked on a national tour in China. This year, the school will join hands with the 108-member chorus of Fudan University and the 113-piece student orchestra of Shanghai Jiao Tong University to create a larger and more spectacular edition of the suite. 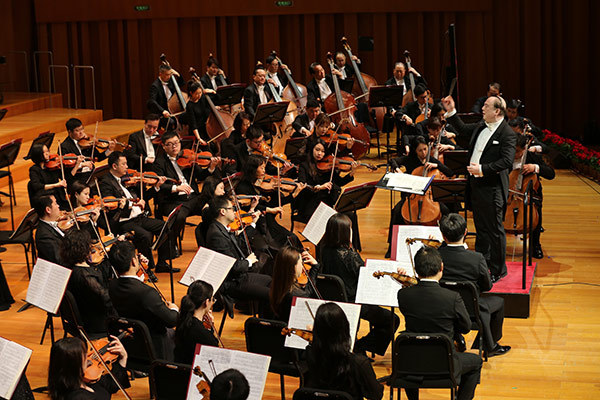 Feng says the new interpretation will be faithful to the original creation, musically and lyrically, but the digital art department of the Shanghai Conservatory of Music will create new visual presentations and new stage settings.

The Shanghai Symphony Orchestra is currently touring six Chinese cities with three new commissioned music pieces, The Forefathers, by Yang Fan; Let's Go to the Sea and Look up at the Starry Sky, by Hao Weiya; and Ode to China, by Yu Yang. The tour, which kicked off on April 15 and will run until May 6, is a special part of the Shanghai Spring Music Festival.

The orchestra started its tour in Beijing, where the concert was conducted by Yu Feng, director of the Central Conservatory of Music. The plan is to take the three new pieces, alongside a series of red-themed repertoire, to Hangzhou, Zhejiang province; Ganzhou, Jiangxi province; Changsha, Hunan province; Wuhan, Hubei province; and eventually Yan'an, Shaanxi province, an important center for the Chinese revolution.

In June, upon returning to Shanghai, the orchestra will perform at its home concert hall, when young conductors will take the baton. According to Zhou Ping, director of Shanghai Symphony Orchestra, the young musicians have pledged to "carry on with the idealistic faith and patriotic passion that is reflected in the music creation".

The festival will present two dance productions-a gala performance featuring emerging choreographers' creations, as well as The Burning Youth, a new dance theater production by Shanghai Ballet. The latter tells a story about a group of young people from different backgrounds meeting in Yan'an in the 1930s before becoming revolutionary soldiers.

According to Xin Lili, head of Shanghai Ballet, the new production will feature innovative stage designs and present a highly aesthetic production of the revolutionary theme.

The Burning Youth will be presented at the Shanghai Grand Theater from May 7 to 8.