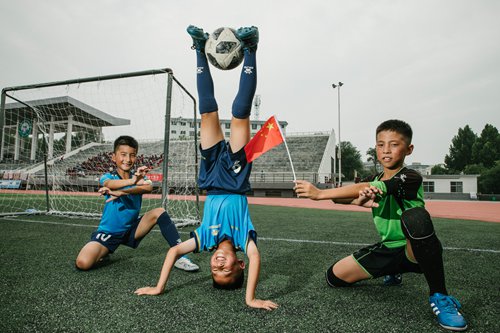 Wan Yi is upside down.

The mid-July sun burns. He begins to shake, breathing heavily. Sweat drops from his face to the ground. The azure soccer jersey soaks into a deeper blue. His face turns beetroot.

A few minutes earlier, Wan and his 10-year-old teammates ran off the artificial grass field, having just won their match. Wan decided to celebrate in his own unique way, ball between feet.

It's his superpower. He acquired it from five years of martial arts training.

Five minutes over, Wan puts his legs down and stands up again.

"Only I can do this!" Wan says, picks up his ball and races to join his teammates on the stand.

About 200 schoolmates on the stand cheer the players in an extremely organized way.

Behind them all, another intense match is occurring between older boys.

Wan, 10, is a student at the Tagou martial arts school in Dengfeng, a county-level city administered by Zhengzhou, capital of Central China's Henan Province.

All the students take martial arts training in the school.

When this relatively remote school with its deep links to the mythological Shaolin Temple unveiled its youth soccer training project in 2015, massive online attention ensued.

In the popular imagination, kung fu soccer is using a superpower - 10 bald superheroes in plain robes flying around the pitch and volleying the ball from a goalkeeper who apparently has eight arms…

The 2001 movie Shaolin Soccer would appear more than a lightweight comedy movie for many online soccer aficionados.

Or as Wan puts it, "Soccer was invented in China. People will laugh at China if we do not play well."

A midfielder in one of the school's under-11 teams, Wan's goal is to play for China's national team and in the FIFA World Cup.

China's men's team played once in the World Cup, in 2002, and went home without a single goal from three group matches.

The government in 2015 stepped up efforts to promote soccer on campuses across the country.

Tagou started youth soccer training in December 2015. Wan was one of the earliest to join the program when teams were formed in 2016 by selecting children with perceived soccer talent.

Tagou, the only official Shaolin soccer youth training base under the sports bureau of Henan Province, has 1,519 young boys and girls aged 4 to 15, 23 teams based on different ages and capabilities.

"Children with a martial arts background are quicker, more flexible and determined," Liu Songpu, who is in charge of the soccer department in Tagou school, tells the Global Times.

In four years, China has made notable progress in promoting soccer in schools through enhanced training, more games and upgraded facilities, Wang Dengfeng, a senior official at the Ministry of Education, said on July 23 in Beijing, the Xinhua News Agency reported.

Zhu Xinggang scores in the U12-13 match of the Second Youth Games of China in North China's Inner Mongolia Autonomous Region.

But the kung fu bow backfires as the referee warns Zhu, believing the gesture by the Tagou school right winger was intended to humiliate his opponent.

This is the first time Tagou's soccer team played at a national level and crowds follow the mysterious team with Shaolin in its name.

At the end of the day, the team from Shaolin finish a respectable, if unmagical, fourth.

"People thought that soccer at the Shaolin kung fu school must be something mysterious," Liu says. "But we are just the same."

Every day all the players at Tagou have 1.5 hours' training in martial arts.

Zhao, 20, graduated from Tagou four years ago. He stayed at the school as a soccer coach after some training.

Most of the soccer coaches at the school have a martial arts background.

As one of the most famous martial arts schools in Dengfeng, Tagou school has a deep connection with the Shaolin Temple.

The school was built in 1978 by Liu Baoshan, who is from a martial arts family in the village near the temple.

The boarding school today has its original campus, which is only 2 kilometers from the Shaolin Temple.

In total the school has more than 35,000 students and teachers on three campuses, reads its official website.

July 16 was the first match day for the school's annual sports meeting.

In the afternoon, the youngest players experience their first-ever formal game.

The match is strictly by the rules. The girls must remove their flower headbands and tooth amulets. The players have full kit including shin guards and captain's armband.

At kickoff, the girls appear unready.

Ma finds she must constantly shout instructions at her players, who appear a little overwhelmed by the occasion.

Zhao's team are the more aggressive and experienced. They even appear to use some simple tactics. It's a mismatch.

The girls quickly crumble to lose 10-0.

"I don't mind we lost," Ma tells the Global Times. "But they have to maintain a more focused attitude during the game."

The Henan provincial sport bureau says women's soccer development is a key project and it is also encouraged at the school.

Zhao and Ma's players take care of themselves at boarding school.

Zhao's 20 players have three aunties who look after them. Before the children arrive from canteen after lunch, the three are making beds, turning on the air conditioning and bringing them water in red plastic buckets.

When the players get back, they wash, change clothes and nap in their small wooden beds.

The school has 39 canteens but only three soccer pitches.

Players compete for space with thousands of other schoolmates in the crowded campus.

A new campus with 10 soccer pitches is being built, says Zhao.

There's no denying the coaches also need to improve.

"It's OK for me to teach basic skills, but I lack knowledge of tactics," Zhao admits.

The school has six Portuguese coaches sent by Henan sport bureau through the youth training promotion project. They have different duties - management, fitness, tactics and techniques.

"I often communicate with the foreign coaches to learn from them," Zhao says.

When the Global Times reporter visited the school, the Portuguese coaches had gone back to their country for visas.

Tagou is also tasked by the General Administration of Sports to find athletes for the summer and winter Olympics.

According to Henan government's website in June 2018, 143 athletes left Tagou to join national training teams in sports including freestyle skiing, snowboarding and surfing.

An ice hockey team is also to be found in Tagou.

They practice with roller skates on the floor.

"These with martial arts background can make achievements in a very short time," Feng Weifeng, who is in charge of publicity for the school, tells the Global Times. "They have great balance and flexibility."

"We aim at the Olympics," he says.