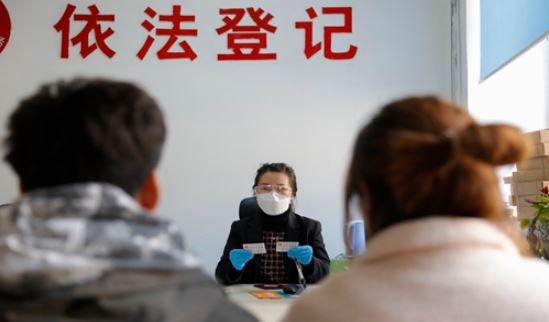 The city of Shenzhen in South China's Guangdong Province has seen divorce numbers soar as the COVID-19 epidemic ebbs.

According to the online marriage booking system of the Shenzhen civil affairs bureau, divorce appointment spots are fully booked until June 16.

In April, the total number of divorces in the city was around 3,500, accounting for 84 percent of the number of marriage registrations -- a sharp increase on the average level in past years, which is usually less than 30 percent, public statistics showed.

"Because of the epidemic, many couples who wanted to divorce in February and March put off doing so, which led to a divorce boom in April and May," said one employee in the civil affairs bureau in Shenzhen's Luohu district, noting that generally 15 spots are available for divorce appointments, but the spots occasionally have to be increased to 20 to meet high demand, Business Daily reported on Sunday.

Shenzhen was not the only city to experience a sharp increase in the divorce rate as the epidemic eases.

Family experts explained that the rush for couples to separate was due to the growing conflicts caused by the 70-day quarantine enforced during the COVID-19 outbreak.

Netizens also joined the discussion on the reasons why more couples have been so eager to end their marriage recently.

Some people pointed out that the so-called "divorce calming down period" which has been proposed to be added in the draft civil code in China and will be handed to the annual session of the National People's Congress to be held on Friday for further discussion, may also have been a catalyst for couples' decisions to speed up their divorces.

The "divorce calming down period" refers to a 30-day period for couples to calm down and rethink their decision after they hand in the application for divorce.

During this period, if either party is unwilling to divorce, he or she can withdraw its application. When the period is over, both parties must go to the civil affairs bureau to get the divorce certificate, or the divorce registration is deemed to have been withdrawn.

Many netizens believe that the regulation will make it harder for some people to get their divorce finalized, which is why they are rushing to apply for the divorce before the proposed regulation takes effect if it gets passed.