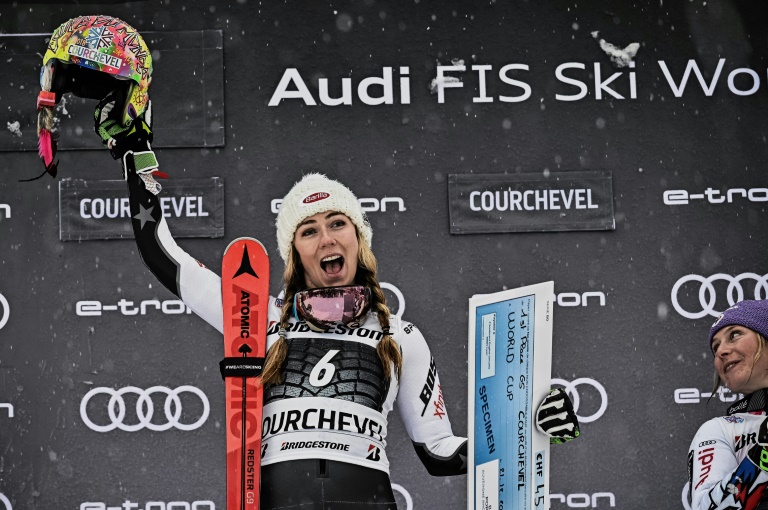 American Mikaela Shiffrin produced a storming second run to leap from third to first when she clinched a World Cup giant slalom victory on her comeback from injury at Courchevel on Friday.

This was Shiffrin's first giant slalom win on the circuit since her gold in the discipline at the Pyeongchang Olympics in February but her sixth success on the World Cup season so far.

With a third straight overall Crystal Globe already looking all but a formality for the 23-year-old this was also her 49th World Cup win with Ingemar Stenmark's all-time record standing at 86.

"I'm lucky, that was really close and it went down to the last few gates," explained a thrilled Shiffrin.

"Normally I don't do very well in these kinds of conditions," said the woman from Vail, Colorado who has two Olympic golds and three world championship titles.

"But I trained well here on the track and today for some reason the skis felt perfect on my feet."

Shiffrin often says how she feels on her skis is more important than winning, and has sometimes been sick ahead of her run, as was the case at the last Olympics when she came fourth in the slalom.

"I can have problems in poor visibility and the snow was soft, maybe not having raced at Val Gardena (earlier this week) left me fresher. Anyway everything worked out for me today."

Third-placed Worley was full of praise for her American rival.

"It's not easy to come back like that and win with zero preparation, it shows just what an amazing athlete she is," said Worley

And that is despite not competing since winning a parallel slalom in St Moritz on December 9 after struggling with back pain.

"I had a good long rest, longer than we expected because I had a bad back, which stopped me from training, so I got plenty of rest in the end," she said.

With a slick first run in mist and falling snow Rebensburg led a posse of five skiers within 0.27sec of each other, including giant slalom World Cup leader Federica Brignone who still leads Shiffrin by 20 points despite coming fifth on the day.