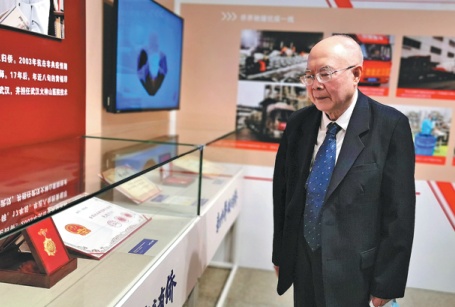 Huang Xiqiu, a returned overseas Chinese who played an important role in the construction of Huoshenshan Hospital during the COVID-19 outbreak in Wuhan earlier this year, visits the exhibition on Friday. (Photo: China Daily)

Emotional attachment gets closer in times of crisis, as has been proved this year during the fight against the novel coronavirus pandemic.

An ongoing exhibition at the Overseas Chinese History Museum of China in Beijing unveils how Chinese people at home and abroad joined hands in an effort to contain COVID-19.

Over 200 exhibits, including photos, medical equipment, documents, and other personal belongings of those who once fought on the front line against the virus, seem to concentrate the past months into a time capsule, ranging from the fast response of overseas Chinese to support China during the early stage of the outbreak, to the global cooperation after COVID-19 became a pandemic.

Many epic stories about this "war" are recounted at the exhibition. Wan Lijun, head of All-China Federation of Returned Overseas Chinese, hailed the great contribution made by the overseas Chinese community at the opening ceremony of the exhibition on Friday.

"The exhibition only reflects a small portion of the scenarios that happened in the campaign to contain COVID-19, but many other touching moments remain unseen by the public," Wan says. "However, they all show that Chinese people, no matter where they are, will take on the duty of offering their hand to help their compatriots when the country faces crisis."

Huang Xiqiu, 79, was born in a Chinese immigrants' family in Indonesia. He gradually became a famed architect after returning to China. In 2003, when SARS hit Beijing, his team built Xiaotangshan Hospital within 7 days.

And when, 17 years later, COVID-19 brought an even bigger threat to the country's public health, the veteran volunteered to design a new hospital for Wuhan, the hardest-hit Chinese city during the epidemic, despite his advancing age. Within hours, his team had revised the original blueprint of Xiaotangshan Hospital and provided the complete construction plan for the Huoshenshan Hospital to Wuhan urban construction administration.

His application to join the "battle" is on display at the exhibition.

"Chinese people's effort to contain the virus showed their remarkable strength and powerful spirit," Huang says. "We've seen many overseas Chinese join the campaign. They once left home and contributed to social and economic development of other countries. However, they have never forgotten their origin. It's a tradition of overseas Chinese."

Lu Lin, director of Peking University Sixth Hospital and an academician at the China Academy of Sciences, is an overseas Chinese returning from the United States. His team went to Wuhan for three times during the viral outbreak to offer psychological intervention for critical patients. In September, he opened a new office in Wuhan to help ease the psychological impact of COVID-19 on local communities.

"The pandemic has enabled Chinese people to feel their shared 'heart'," Lu says. "As COVID-19 continues to spread overseas, we also care for our compatriots living abroad."

Consequently, Lu has contacted medical teams in countries around the globe and offered psychological consulting services through internet for Chinese who are living abroad as well.

Some artifacts on show may not be that precious in terms of their actual values, but as witnesses to history, they are priceless.

Such items, for example, as the numerous luggage tags from a flight that once carried not just medical supplies from overseas Chinese, but hope during the darkest hours of China's fight with the virus. And the empty boxes, with poetic words of encouragement written on them that were once full of masks, also represented overseas Chinese people's best wishes to their homeland.

According to the statistics of the All-China Federation of Returned Overseas Chinese, China received donations of cash and medical supplies worth over 2.3 billion yuan ($346 million) from overseas Chinese communities during the COVID-19 outbreak in the country.

Nevertheless, as COVID-19 is still rampant in the rest of the world, Wan notes the necessity for continuous global cooperation.

"The pandemic might deeply influence the development of human society," he says. "But people's pursuit of happiness and peace will not change. Overseas Chinese communities the world over will join hands with people in places that are still affected by COVID-19 in a bid to inspire confidence that it can be overcome."

The exhibition will run through Dec 13.