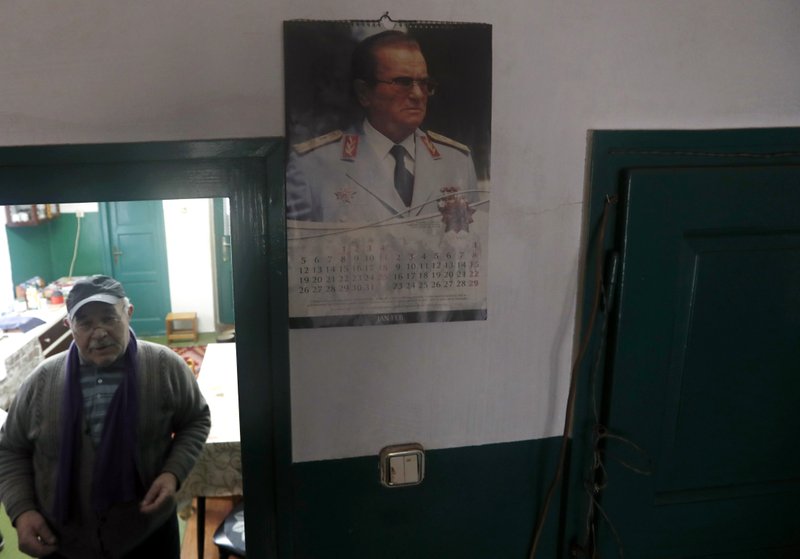 In this photo taken on Thursday, Jan. 23, 2020, Uros Trainovic walks inside his house decorated with picture of former Yugoslav communist president Josip Broz Tito, in the village of Blagojev Kamen, Serbia. (Photo: AP)

Uros Trainovic remembers when his small mining village in eastern Serbia was a vibrant home to 200 families, had a school of its own, a doctor and a shop.

The transformation of Blagojev Kamen is not unique in a country that experienced years of war and sanctions in the 1990s following the break-up of Yugoslavia. In a twist of historical irony, one of the causes behind those years of war was the idea of creating a Greater Serbia out of the ashes of the former Yugoslavia.

Near-empty villages with abandoned, crumbling houses can be seen all over Serbia — a clear symptom of a shrinking population that is raising acute questions over the economic well-being of the country. The decline is happening so fast it’s considered a national emergency and the United Nations has stepped in to help.

“This village used to be full of people, I used to go to school here,” the 71-year-old Trainovic recalls.

“It is such a pity and so sad that everybody left ... now there are only few of us and there are no young people any more.”

According to the World Bank, Serbia’s population of just below 7 million is projected to fall to 5.8 million by 2050. That would represent a 25% fall since 1990.

The Serbian government says the Balkan country is effectively losing a town each year, and that as many as 18 municipalities have fewer than 10,000 people: “We are 103 people less each day.”

Population changes are a fact of life across Europe, but the problem is acutely different in Central and Eastern Europe where the low fertility rates that are commonplace in developed countries combine with high migration rates and low immigration more akin to developing nations.

The economic knock-on effects on a country striving to join the European Union are evident and amount to billions of dollars in the short term. In the longer run, there are also costs related to the fact that a smaller population of working age will have to contribute more to support the ranks of those of pensionable age.

The UN Development Program and the UN Population Fund have assembled a group of seven international experts of different backgrounds and specialities to help out. The members visited Serbia last month for a fact-finding mission.

Wolfgang Lutz, an Austrian expert in demographics at the International Institute for Applied Systems Analysis, or IIASA, said the main problem is related to the make-up of those leaving Serbia rather than the overall population decline.

Reflecting the decades of crisis are villages like Blagojev Kamen. It had flourished when a nearby gold mine kept the area alive before and after World War II, but its fortunes have sunk as the mine closed down in the mid-1990s.

Trainovic said there are still gold and other minerals in the mine but that it needs investment and hard work.

“One of my sons is in Germany and the other one is in Austria,” he said. “They visit often but they have nothing to return to.”

Serbia’s government has tried to buck the trend, offering financial benefits for couples with multiple children, state-backed IVF, the renovation of schools and day care centers, aid to families in rural areas or backing for businesses in villages.

Ruth Finkelstein, an assistant professor from Columbia University who is an expert on aging and its social implications, said Serbia should also strive to find a role for its growing elderly population.

“Room after room, people focus only on the young people,” she said.

It’s not only Serbia that is worried.

Serbia’s neighbor Croatia, which currently holds the European Union’s rotating six-month presidency, has made the “pressing issue of demographic challenges” a priority. Croatia’s rural areas have been emptying at an alarming rate while more than 15% of Croatia’s 4.2 million people are living and working abroad. Bulgaria and Ukraine are two others enduring population declines.

Stjepan Sterc, a prominent Croatian demography expert, thinks the efforts to deal with the problems so far across the Balkans are not enough and that the tax system has to be more focused on reversing the trends.

“Demography should be recognized as the essence of economic development so that the most important encouragement tool is directed toward it,” he said.

Lutz, who directs the World Population Program for the IIASA, said small countries can have a competitive advantage.

“I’ve seen a lot of pessimism, I’ve seen a lot of panic even about what is happening,” he said. “The challenge is to convert this ... into some action that is positive, making this a more revitalized, more vibrant society again, that looks into the future.”