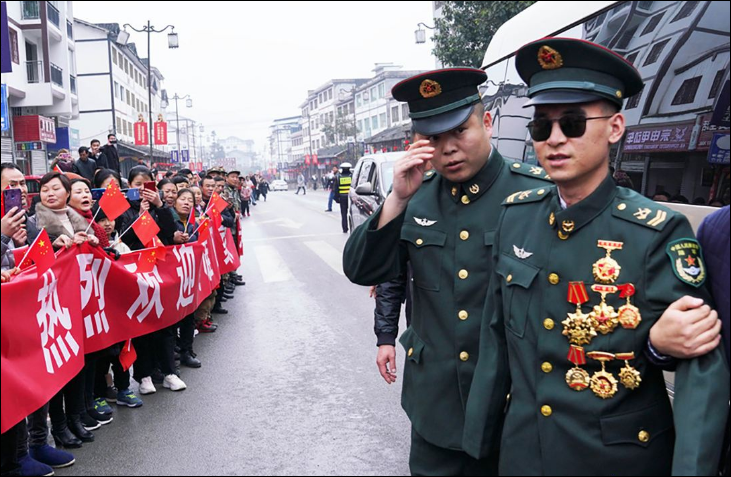 The day before the Lunar New Year's Eve, Chinese amputee demining soldier Du Fuguo, once honored by the Chinese government for his heroic deed in a routine operation, returned to his hometown of Zunyi, the historic city in southwest China's Guizhou Province.

Under the persistent drizzle, hundreds of fellow countrymen stood along the country road waiting for their hero to come back home.

It had been seven years since Du spent the Spring Festival with his family, but what was waiting for him was something very different from the normal buzzing and excitement. All because of the coronavirus spread that took his younger sister and brother to the frontlines of the battle against the epidemic.

Du Fujia, the younger sister of Du Fuguo, is a nurse at the emergency clinic of People's Hospital in Meitan County in Zunyi. During the nationwide coronavirus outbreak, the hospital where she has been working for four years became one of the 183 designated hospitals in Guizhou Province to admit patients infected with the virus.

On January 27, the third day of the Lunar New Year, when families gather at home enjoying the traditional festival, People's Hospital in Meitan County initiated a proposal urging medical workers to join the fight against the epidemic. Du Fujia volunteered and became one of the medical workers in the first batch of frontline staff.

"It is not only carrying on my elder brother's spirit, but also the inheritance of our family's tradition. Therefore, even if it is the first time in seven years he returns home for family reunion, I still need to go," said Du Fujia to PLA Daily, the official newspaper of the Chinese People's Liberation Army.

But she is not the only sibling that Du Fuguo has been concerned about. One of his younger brothers, Du Fumin, who graduated and started his career just one year ago as an intensive care physician responsible for taking care of critically ill patients, is also fighting on the frontline against the virus.

Du Fumin believes that during this special period, he as a medical worker, should fulfill his duties and responsibilities by standing at the frontline of the epidemic prevention and control, according to China News Service.

Another of Du Fuguo's younger brothers, Du Fuqiang, is reportedly a frontier troops soldier stationed in the southwestern Tibet Autonomous Region, defending the country's sovereignty year in and year out.

In 2018, Du Fuguo, 27 years old at the time, served as a mine sweeper in the Chinese People's Liberation Army. He opted to let his teammate step back and attempted to remove a hand grenade in a mine clearance operation. The following detonation cost his eyes and hands. Du was awarded the "Role Model of Our Times" title as well as the "Heroic Demining Soldier" title last year.

Once Du's family was brought to the public's attention, he has been highly praised by Chinese society. "Salute to the family of heroes," commented @linglingzhenyu, a user on Weibo, China's equivalent of Twitter. Another Weibo user @shuaqiantixiaoZ commented that "the home is the smallest unit of a country, and the country is made up of thousands of families. China will succeed in the battle. Wuhan, stay strong!"

When the virus "storm" subsidizes, all "warriors" in this health battlefield will be remembered and honored.