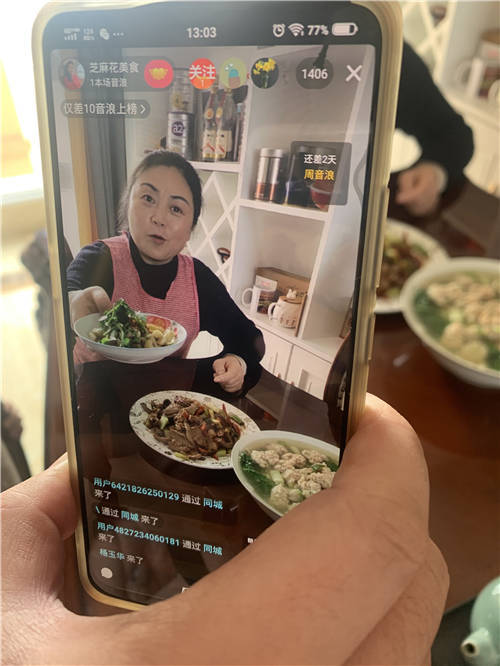 Yu Yunzhi shows her mouth-watering dishes during a livestream on Douyin on February 11. The 47-minute livestream was watched by a total of 19,000 people with simultaneous viewers reaching 1,437 at one time. [Photo provided to China Daily]

It was a Sunday and the last day of China's Spring Festival which was prolonged due to the novel coronavirus pandemic.

As planned, Yu Yunzhi would be in Shanghai taking care of her threeyear-old grandson Xiaotangyuan when her daughter and son-in-law went to work.

However, the whole family was stranded in their hometown Mianzhu city of Sichuan province in southwestern China because of the pandemic that affected the work and life of hundreds of millions of people across the country.

On that day, the 57-year-old started her livestream cooking show on Douyin, a videosharing site. This was the first time she had undertaken such a task.

"Hi, everyone, I'm Sichuan auntie Mama Zhi and today I'm going to teach you how to cook chicken with green and red peppers at home," she said in Mandarin with a Sichuan accent.

The 22-minute livestream was watched by 145 people.

Yu has experienced tragedy in her life, having survived the 512(May 12) Wenchuan earthquake in 2008. She knows what it's like to start again.

She has a talent and obvious enthusiasm for cooking. This actually made her a cooking celebrity in the neighborhoods when she came to Shanghai to take care of her pregnant daughter in 2015.

Some moms even visited their apartment at night to learn how to cook delicious and healthy food for their children.

They suggested that Yu should run a restaurant or make livestreams to teach more people cooking. However, it was never on the busy grandma's agenda until the sudden outbreak.

"At first I thought what's the deal of livestreaming an auntie cooking at home? It's also weird to talk to a camera while cooking," Yu said.

New to livestreaming, Yu was quite uneasy and unconsciously shaking from side to side in front of the camera.

But the retiree from a rural commercial bank branch in Sichuan felt "a sense of excitement" to teach young people her cooking skills.

"Dining out costs a lot and is not safe enough, especially during the outbreak. Although I cannot go to the front line to combat the virus as many doctors did, I'm glad that I can teach young people how to cook at home so that they can stay at home and avoid infection," she said.

Yu made 13 livestreams in February, teaching how to put together Sichuan home-style dishes, including steamed beef with fried rice powder and sauteed garlic sprouts with cured meat.

A 47-minute livestream about stir-frying pork liver and kidney, was watched by a total of 19,000 people with simultaneous viewers reaching 1,437 at one time. It also attracted 129 new fans to follow her account.

A recent report by QuestMobile on the impact of COVID-19 on China's mobile livestreaming industry found that the time that every netizen spent on mobile internet since the outbreak has increased by 21.5 percent compared to that at the beginning of this year, especially on video-related apps.

However, the quake survivor finds it hard to stand in the kitchen for four to five hours every time for a livestream, from doing preparations beforehand to cleaning up the kitchen afterward.

Yu was the only person to crawl out alive of a six-floor office building destroyed by the quake. She still suffers pain and discomfort in her waist.

Also, the food cooked during one livestream is more than what a family of four can eat in one meal, especially considering that they cannot invite friends or relatives to share with them given the outbreak.

According to local regulations in Sichuan province, only one person of a household is allowed to go out for shopping twice a week during the outbreak.

Sometimes Yu had to visit several places in order to purchase what was required for cooking.

"I feel happy and satisfied that I can do something meaningful instead of sitting around at home. This is also what I can repay to society for the love and care that I once received after the earthquake," Yu said.

So Yu's sisters, who didn't initially think it was a good idea to start livestreaming, even offered a hand in buying raw materials for her cooking.

A follower from Pingdingshan, Henan province, who spent a few years in Sichuan province, was an immediate fan of Yu's livestream. Every time Yu livestreamed, the follower would work as a typist recording tips in the comments for others.

Guo Rong, a 30-year-old television director working in Shanghai is one of the 1,182 followers of Yu on Douyin.

"We rarely cook at home. At first, I asked my mom to watch the livestream with me so that she can prepare delicious food," Guo said.

Guo only got the chance to practice what she've learnt from Yu after returning to Shanghai in March when she had to undergo a 14-day self-quarantine.

"I was eager for spicy food then," Guo said.

Now, thanks to the livestream, she has successfully made mapo tofu and spicy dry hotpot at home.

At the end of February, Yu prepared 10 bottles of homemade chili oil for her fans to thank for their support.

"I'm so happy when they said the oil is very tasty and they love it," she said.

Now life and work are gradually returning to normal as the family went back to Shanghai.

Yu is still expecting her next livestream amid the family's busy daily schedule.

She also wishes that she could open a restaurant that serves homemade Sichuan style food for more people in future when her grandson goes to school.