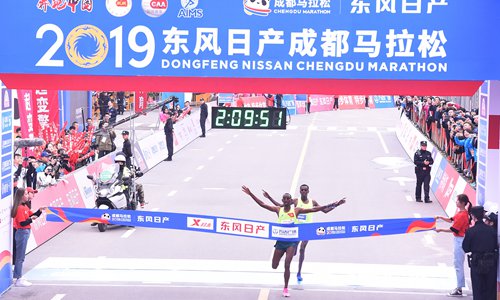 The city of Chengdu has several distinctive claims to fame, which were combined in a unique way over the weekend. As the capital of Sichuan Province, the city is home to the world renowned spicy cuisine, and it also hosts one of the largest marathons in China.

During Sunday's marathon runners could forego the traditional energy bar and fuel up on famous Sichuan snacks such as wonton, Dandan noodles and Tianshui noodles, spicy meat pie and fried rice balls, according to a video posted on China's social media Pear Video.

It's not known how many of the 30,000 marathon runners stopped en route at the refreshment stands offering the unique energy boosting treats.

It's also not known if the much loved pungent, spicy cuisine is actually a suitable energy booster for marathoners, which didn't stop some netizens from thinking about starting to train for next year's marathon.

"How do I sign up for the next marathon? If I don't have to worry about what I eat, I'll be a sports lover too," joked a netizen on China's Twitter-like Sina Weibo.

"I bet organizers next year will even provide a hot pot for the runners," said another Weibo user.