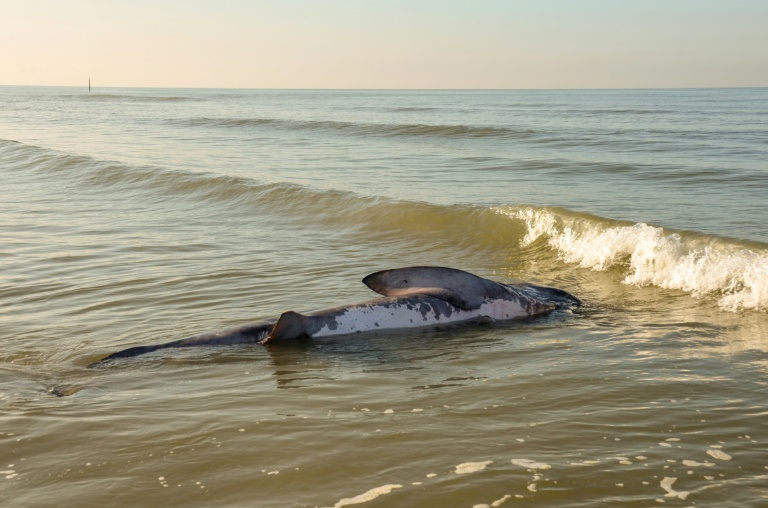 A file photo shows a dead basking shark on a North Sea beach in Belgium. It is the world's second largest fish but crucial details about its behaviour remain elusive to researchers.(Photo: AFP)

The sight of a basking shark's brooding silhouette gliding through the waters off western France is more than just a rare treat for sailors -- it is a boon for scientists trying to trace its secretive migrations across the globe.

It may be the world's second largest fish, growing to more than 10 metres (35 feet), but the basking shark, or Cetorhinus maximus, is an enigma for scientists eager to help preserve the plankton-eating giant after centuries of overfishing.

Hunted voraciously for its massive fin -- highly prized for sharks' fin soup in China -- as well as its oily liver and meat, global populations of basking shark declined precipitously during the 20th century. The species has struggled to recover because of slow reproduction rates.

While the sharks have captured the imagination of sailors for hundreds of years -- some think early seafarers mistook the massive sharks swimming in single file for sea monsters -- crucial details about their behaviour remain elusive to researchers.

"It's a shark that remains very mysterious," said Alexandra Rohr of the research group APECS, which is based in the Brittany town of Brest and dedicated to the study of sharks, skates and rays.

Even population estimates, the age of sexual maturity and where and when the sharks reproduce are not known for certain, Rohr said.

They are spotted more frequently during the summer months while in winter they all but vanish from view, leading to theories that they migrate to warmer regions or dive down into the ocean depths.

Using new tracking technology, APECS researchers monitoring sharks when they are near the water's surface have discovered evidence of a much greater migratory range than previously thought.

One tagged female was tracked off the coast of northern Scotland on September 20, 2016, and then resurfaced four months later south of the Canary Islands. By May 2017 the shark was back in the Bay of Biscay, south of Brittany.

APECS also relies on crowd-sourced information from divers, sailors and other members of the public.

Alain Quemere sighted a basking shark during a fishing trip in the Glenan archipelago off the south coast of Brittany and reported details to APECS, enabling a research team to find the shark and fit it with a satellite tracker.

"I just saw the tip of his fin," said Quemere, still enraptured by the memory of his five-hour encounter.

"One moment it grazed the front of the boat, which made me laugh because my boat is barely five and a half metres and the shark was eight."

APECS has tagged four sharks so far this year with its new tracking devices, after deploying three in 2016.

Some 77 basking sharks were spotted in 2017 from February to September, with most seen in the Bay of Biscay and around 24 spotted in the Mediterranean.

"You have the impression of seeing a wise old grandfather, it is beautiful," said Frederic Bassemayousse, a diver and photographer who has spotted the sharks three times.

Like the world's largest fish, the whale shark, and the smaller megamouth shark, the basking shark is not a predator.

It earned its common name for its languid movements near the surface of the water, and it eats plankton, which it filters through ribbed gill slits encircling its head.

A single individual is thought capable of sieving nearly an Olympic swimming pool's worth of water every hour, according to APECS.

The International Union for the Conservation of Nature (IUCN) now lists it as "vulnerable" across the world and "endangered" in the North Pacific and Northeast Atlantic.

Basking sharks and whale sharks were in 2003 put onto the Convention on International Trade in Endangered Species (CITES) "Appendix II", which bans all trade in parts, unless under stringent conditions.

Following the last CITES meeting in 2013, a total of eight species of sharks and all manta rays were included.

Overall an estimated 100 million sharks are killed every year, according to an authoritative 2013 study, an amount that conservationists say threatens the survival of many shark species.