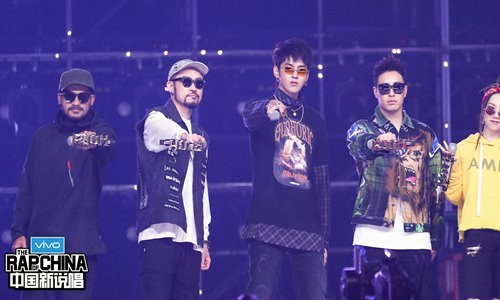 From left: The celebrity producers for the new season of The Rap of China - Chang Chen-yue, MC HotDog, Kris Wu, Wilber Pan and Gloria Tang Tsz-kei Photo: Courtesy of iQiyi

Chinese singer Kris Wu released the first single "Aurora" from his new album of the same name on Wednesday, igniting a wave of excitement among his fans who are still trapped indoors by the COVID-19 pandemic.

Fans have been looking forward to the album since his last single "Eternal Love" was released in November 2019. The related hashtag has been viewed more than 190 million times on China's Twitter-like Sina Weibo.

Some fans said on Sina Weibo that their idol's song has given them the motivation to carry on amidst the still on-going pandemic.

"I still cannot go outside for fun due to the pandemic outbreak, but with this new song I can continue my quarantine life and it gives me hope and comfort," one netizen commented on Sina Weibo.

Like many urban-style songs, the song incorporates the genres of rap and electronic music. However, what causes it to stand out from other urban songs are the particular use of voice and melody, one music blogger introduced on Sina Weibo.

The song includes a multiple-vocal effect, which makes it very catchy.

"It grabs your attention after listening to it several times."

One Wu fan told the Global Times on Wednesday that the singer's songs, which are composed and produced by himself, reveal his attitude about life.

"The style of this song is soft and so it helps us calm down and think about the world," she said. "If you are capable, you should chase your dreams and not be afraid of facing difficulties. I think that is what his song wants to tell us."

The fan said she was taken by the song's positive lyrics including "I will not hide my light."

"I think he is trying to tell us to not lose ourselves by chasing after other people's approval. It is okay to believe in yourself and enjoy loneliness. The aurora that you have should not be hidden."

Wu's actions during the pandemic have also touched his fans, including replying to one fan who is a medical professional fighting on the frontlines.

concert after the pandemic.

Wu replied to her, encouraging her and saying that he was keeping a concert ticket for her. The inspiring comment was applauded by Chinese netizens.