The 2019 Croisements Festival recently announced its repertoire, featuring 50 cultural events from April 26 to July 6 across 35 cities in China. This marks the 14th year of the festival, which is a series of artistic and cultural exchanges between France and China.

Wenzhou in Zhejiang province and Huizhou in Guangdong province will join the growing list of "partner cities" this year.

The program "strives to ensure a territorial network" for French culture to be present and visible in as many cities as possible, says Robert Lacombe, counselor for cooperation and cultural affairs at the French embassy in Beijing.

Actress Zhao Wei, contemporary artist Xu Bing, and musician and producer Gao Xiaosong are the "ambassadors" of this year's festival.

The event will showcase works by Chinese and French artists through visual-arts exhibitions, plays, dances, circus, music and films.

The Marcel Duchamp Prize exhibition, this year entitled Traveler, There Is no Path, will kick off the celebrations. The prize was established in France in 2000 to promote contemporary art. This year will be the third time the works by prize winners and nominees will be shown at the Croisements Festival. 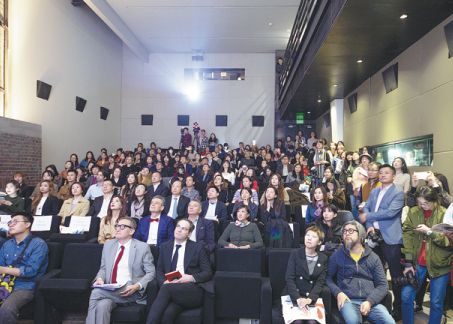 Officials from the French embassy in China, artists from China and France, and people from the media attend a promotional event for the 2019 Croisements Festival on April 11.

The Ponzi Scheme, a play written and directed by French director and musician David Lescot in 2012, is among the highlights this year. It'll tour 10 Chinese cities. It has been adapted into a musical in Chinese, with actress Jiang Wenli playing the male protagonist, Charles Ponzi, and singer Jiang Yingrong playing the heroine, Rose Ponzi.

This year's festival puts a special focus on female artists, musicians and performers.

As 2019 marks the 150th anniversary of French composer Hector Berlioz's death, conductor Claire Levacher will lead the Beijing Symphony Orchestra in a tribute to the classical musician through a China tour.

The Eternal Thread, an exhibition of 50 major works by French-American artist Louise Bourgeois, will be held alongside screenings of a film that documents her life and work.

Lacombe says the proportion of female artists at the festival this year was planned to enable women to showcase their talents and be acknowledged for their influence in the art world.