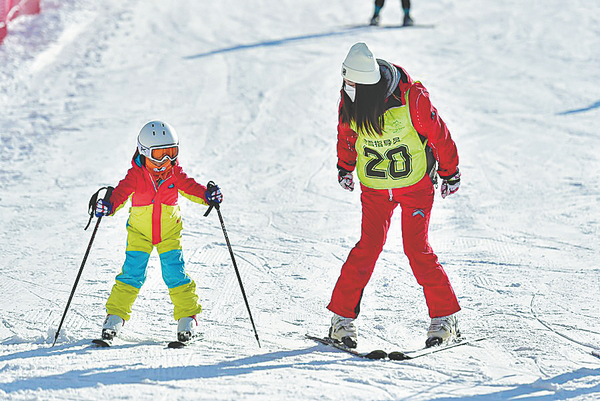 With the Beijing 2022 Olympic Winter Games approaching, China's commitment to engage 300 million people in winter sports is becoming a reality.

This has led to a dramatic increase in skiing enthusiasts, which has, in turn, contributed to the notable growth of the Chinese ski market.

According to Wu Bin, deputy director of the Beijing Ski Association, since 2011, China's ski industry has been in a stage of rapid development, accelerated by Beijing's successful Olympic bid.

Xu Xiujuan, a 31-year-old Harbin native, was once a professional snowboarder with the national team. In 2019, following retirement, she settled down in the Xinjiang Uygur autonomous region to promote the sport as a professional coach.

Since then, Xu has seen with her own eyes how popular skiing has become. "Over the past three snow seasons, I definitely feel that the number of skiers is increasing," she says.

"The free lessons we offer every weekend are packed with students. A greater number of children are signing up for snowboarding programs. Over the past two snow seasons, my team and I have trained more than 2,000 teenagers."

"After winning the bid to host the Winter Olympics, the numbers of skiers have increased exponentially," says Liang Gang, general manager of Jixue Ski Resort.

"Before, our customers were mainly adults, but now we see a wide age range, from 3－and 4-year-olds to people in their 70s, but teenagers have become the majority," he explains.

Li says that, when the Thaiwoo resort opened in 2015, the number of guests using their own snowboards was below 30 percent of the total.

"Currently, more than half of the guests bring their own gear, and the number of snowboarders has surpassed that of skiers," Li says.

"They basically bring their own suits and helmets. Young people have become the major consumers, which indicates that the market has been diversified and that the consumption ability of the next generation has risen."

Major Western ski brands have also noticed the rapid development of the Chinese ski market. German brand Bogner announced that it will establish a joint venture with the Chinese brand Bosideng, planning to establish about 80 stores in China within five years.

The North American ski sports brand Spyder entered the Chinese market in 2019. It currently focuses on first- and second-tier cities, opening franchise stores mainly in the local mid- to high-end shopping malls. They also have a number of ski specialty shops in China's northeastern provinces where skiing is popular.

A large number of brands were attracted by the potential offered by the Winter Olympics. However, how the Chinese ski market will continue to develop following the Games is a concern for many.

Wu believes that the market will return to its original state of development after the Winter Olympics, which means speculative capital may leave the market.

"I think the ski slopes should be transformed into world-class ski tourism resorts. Management must be up to international standards and they should cooperate with international brands," says Jiang Yihai, vice-chairman of the Heilongjiang Ski Association.