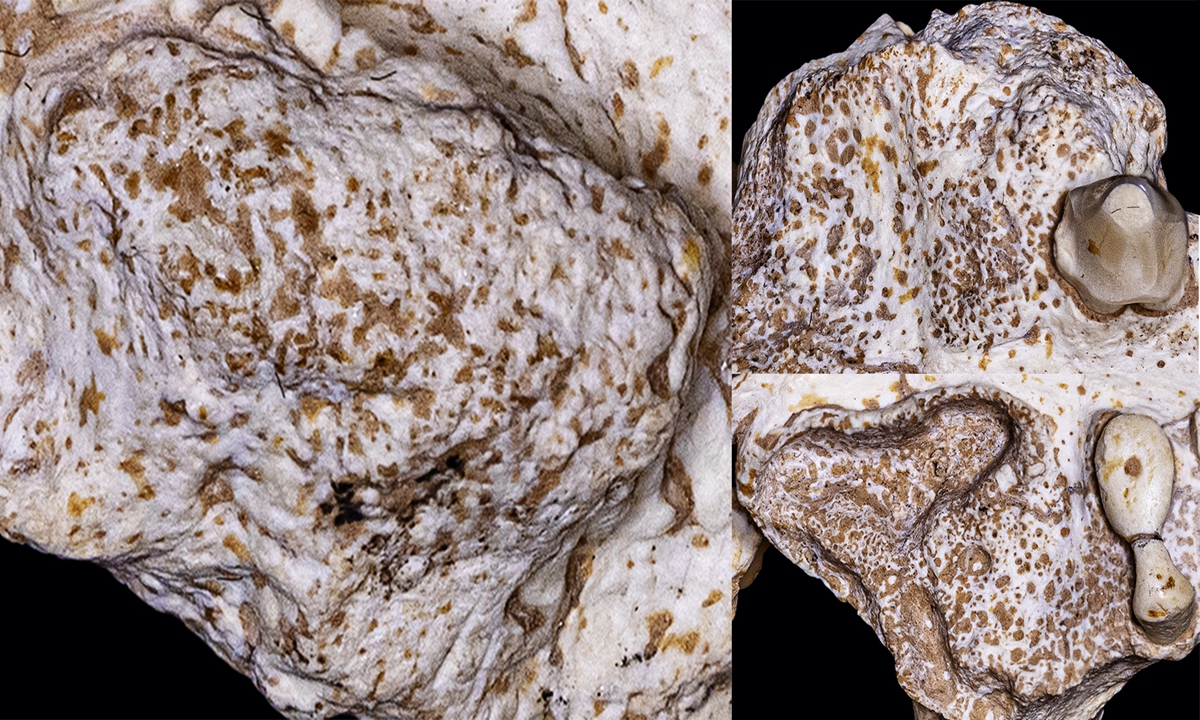 Image of the Parataxidea's lesion (Photo: Courtesy of Xing Lida)

A skull fossil of a Parataxidea of the mustelidae species diagnosed of ossifying fibroma was discovered by scientists for the first time in China, a new achievement in the field of paleopathology, a joint team of Chinese and foreign scientists announced on Monday.

In the newly discovered fossil skull, there is obvious hyperplasia in the distal region of the maxillary teeth, which was confirmed as ossifying fibroma, making the Parataxidea the first documented case of mustelidae animal diagnosed of ossifying fibroma.

The fossil skull of a small-sized Parataxidea was discovered in the Linxia Basin in Northwest China's Gansu Province by a research team led by Xing Lida, associate professor from China University of Geosciences in Beijing, who shared a statement with the Global Times on Monday.

Paleopathology is a discipline that studies the pathological changes of fossil or subfossil animals with modern medical theories, with a variety of fields such as pathology, biology, physical anthropology and archaeology involved.

It was common for ancient vertebrates to get injured and get sick in the natural environment. Most evidence of disease is found in the fossilized bones due to the limitations of the fossils buried. Thus, the majority of vertebrate paleopathology relies on the skeletal pathological changes of individual animals.

The research team led by Xing has long been engaged in the study of paleopathology over the past decade and has published paleopathology theses on different ancient creatures such as Sinoraptor, Sinosaurus, Lufengosaurus and Yabeinosaurus about the pathological changes in their bones, joints and teeth.

The skull fossil was discovered in the middle of the Liushu Formation of Late Miocene in Baihua village, Linxia Basin. It has a history of 6.3 million years. The fossil skull was only damaged in the back with the rest of it preserved completely.

It belonged to an 8.9-centimeter-long fossil of an adult Parataxidea individual, which is in the family of mustelidae of Carnivora under Mammalia.

Abnormalities in maxillofacial region were found when the fossil was being cleaned and apparent abnormal hyperplasia and enlargement in the position of the posterior teeth on either side of the jaw.

In order to make a more precise diagnosis, the research team conducted a Micro CT scan on the fossil and the tissue of high density was discovered.

After a comparison with the pathological changes studied by modern medical diagnosis, hyperplasia and enlargement were found to be consistent with the appearance of ossifying fibroma.

A further CT image shows that the animal developed tumor during its juvenile period.

Generally speaking, the pain of ossifying fibroma was not obvious but the disease has a great influence on the teeth. It can cause malocclusion of the teeth and prevents the upper and lower teeth to meet, which affects the grinding of foods.

However, an analysis of the size of the animal's skull revealed that the disease did not affect its growth. The scientists concluded that the Parataxidea's main diet must have been soft and easy to digest.

The discovery provides new material and a new perspective for the study of ossifying fibroma as well as evidence to the speculation made by Austrian paleontologist Otto Zdansky who first named the animal as Parataxidea and presumed it lived on fish as its main food source.

The research published in the Historical Biology, an international journal of paleobiology, was an achievement made with the joint effort of scientists from home and abroad.