CULTURE Slapped for a clap: Sumo champ Hakuho dressed down for '3 cheers'

Slapped for a clap: Sumo champ Hakuho dressed down for '3 cheers' 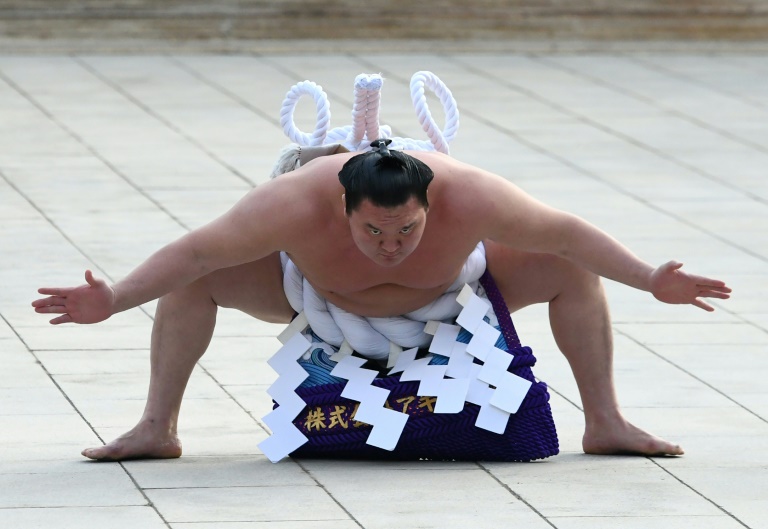 Hakuho is in hot water for an impromtu clap.(Photo: AFP)

Mongolian sumo grand champion Hakuho has been reprimanded for leading the crowd in an impromptu round of hand-clapping after winning a tournament last month, a spokeswoman for the ancient sport said Thursday.

The 34-year-old "Yokozuna" -- or grand champion -- received a dressing-down from top officials after what Hakuho described as a "spur-of-the-moment act" he did "to make spectators happy."

But the three bouts of rhythmic hand-clapping, equivalent to "three cheers", did not go down well with the highly-ritualised sport's governing body, the Japan Sumo Association (JSA).

JSA chairman Hakkaku said in a statement "I told Hakuho that I wanted him to observe sumo's tradition, discipline, courtesy and stylistic beauty as a Yokozuna."

The spokeswoman declined to give a precise reason for the reprimand but public broadcaster NHK noted that the hand-clapping came before the traditional ceremony that usually concludes a sumo tournament.

She said the hulking Mongolian had been given an "oral reprimand", the lightest punishment in the governing body's armoury but also noted he had received a warning previously in 2017 for similar actions.

The popular Hakuho, born Munkhbat Davaajargal, has earned praise for helping restore dignity to sumo following a series of scandals that have tarnished the reputation of a sport said to date back some 2,000 years.

But he is not without his critics among staunch sumo traditionalists, who dislike his wild wrestling style and occasional protests against judges.

Hakuho's stablemaster, sumo elder Miyagino, was hit with a stiffer penalty of a 10-percent salary cut for three months, for neglecting his leadership duties, the JSA spokeswoman said.

Sumo has taken a battering in recent years -- from allegations of bout-fixing and the involvement of organised crime to drugs arrests and severe bullying, the most serious case resulting in the death of a teenage wrestler in 2007.

Yokozuna Harumafuji was charged over a brutal assault on a rival wrestler while out drinking in 2017, ending his illustrious career.

The sport was plunged into further controversy last year when women who rushed to the aid of a local mayor who had collapsed during a speech were repeatedly told to leave the ring, sparking a flurry of embarrassing headlines.

The punishment comes as local media reported Hakuho has applied for Japanese citizenship -- a requirement of all foreign wrestlers wishing to become sumo elders.

The move was seen as an indication of Hakuho's intention to remain in the sumo world after he eventually retires.