CULTURE Sleep at last for Varanasi's keepers of cremation fires

Sleep at last for Varanasi's keepers of cremation fires 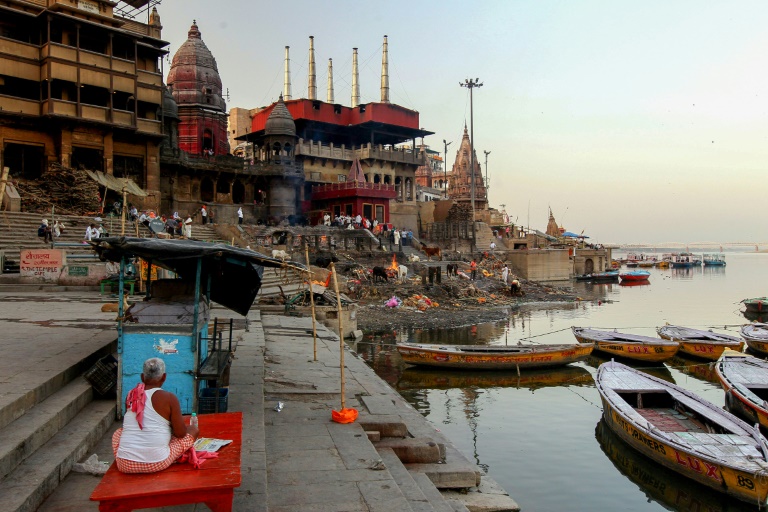 The stench of smouldering funeral pyres usually hangs heavy by the Ganges river in Varanasi, the mystical Indian city where Hindus believe being cremated will free them from the cycle of rebirth.

But because of a nationwide coronavirus lockdown, the 200 to 300 bodies from all over India and beyond that are typically cremated here daily cannot be transported to the city.

Now barely 30 to 40 funerals are taking place per day, all of them locals, and the usual teeming crowds of mourners, pilgrims and tourists in one of India's holiest places are eerily absent.

"We still haven't stopped working," Jagdish Chaudhary, 51, told AFP from Manikarnika, the main cremation "ghat" or embankment in Varanasi, reputedly one of the oldest cities on Earth.

"But none of us has experienced this drastic fall (in cremations) and deserted ghats along the river in our lifetimes."

He belongs to the Doms, the special caste who are keepers of the fire and custodians of the cremation grounds where fires burn 24 hours a day, and have done since time immemorial.

The Doms pass flaming torches to the chief mourner -- whose head is freshly shaved -- to ignite the wooden pyres topped by a corpse wrapped in a white shroud and decorated with marigolds.

They take turns tending the fires all night to make sure they burn properly, adding more wood or ghee -- clarified butter -- as necessary.

The Doms then present the relatives with the ashes, which are given up to the sacred Ganges, where others scour the shallows for any jewellery that may have survived the flames.

The Doms rely mostly on handouts of money and food, but not only are there fewer cremations now but also just five or so mourners at each, against 50 or even several hundred before.

"Even through some of the worst calamities and violence, the city and its cremation ghats never looked this quiet," said Chaudhary.

But, he said, at least now he can get some sleep, the first in five generations from his family to make it home to his bed at night instead of tending the fires.

"At this point, everyone is just praying to the gods that coronavirus goes away soon," he added.

It's not just the locals in Varanasi affected by the lockdown -- which has been extended to at least May 3 -- but some of its visitors too.

Many like Naga Bhushan Rao, a 64-year-old pilgrim from southern India's Andhra Pradesh state, are now stuck in the holy city indefinitely because all transport has stopped nationwide.

"I came here with my brother's family to pray at Shiva temples. But the lockdown was announced soon after we reached here," Rao, a truck driver, told AFP.

"We never thought our stay would be so long," he said by telephone from the guest house room he has now been sharing with six family members for several weeks.

Tens of thousands of pilgrims who flock to Varanasi's temples from different parts of the country, as well as some who came for cremations, are confined to Varanasi, according to some estimates.

Many have run out of money and locals have been helping them with food handouts, while some hotels have stopped charging.

Some local activists managed to get Rao the medicine he needs for a liver complaint.

"There are so many families," Narsingh Das, deputy chairman of Varanasi municipal council, told AFP.

"Some are from Odisha, Maharashtra and other southern states. We are just trying to ensure all of them stuck in different hotels and accommodations get what they need," Das added.

"These Varanasi ghats and temples never looked this deserted."