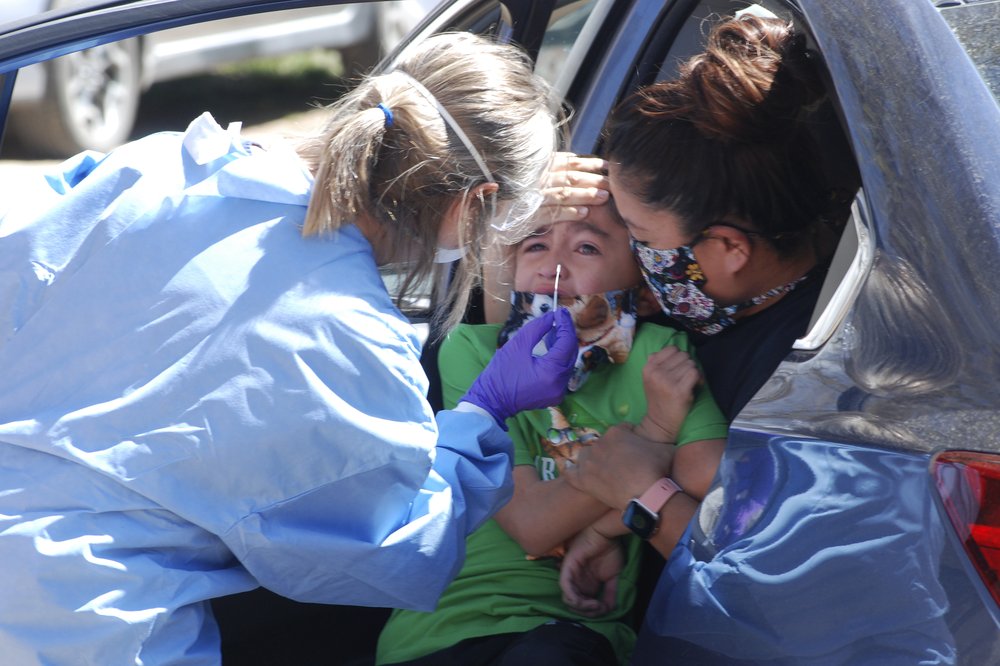 On a dusty plaza in a Native American village that dates back nearly a millennium, a steady trickle of vehicles inched through a pop-up coronavirus testing site.

From the bed of a pickup truck and backseats of cars, wide-eyed children stared from behind hand-sewn masks and then sobbed as testing crews in hospital gowns swabbed their noses. The workers packed the samples into a plastic travel cooler for a return trip past the tribe’s guarded roadblock to a state lab.

The mandatory testing — under the threat of fines by the tribal council in Picuris Pueblo — was being performed by the state Health Department and the US Indian Health Service as they strive to identify potential infection hot spots and contain the virus that’s ravaged other Native American communities. The order covered everyone from visiting construction workers and homebound seniors to the clerks at the pueblo’s sole general store, where candy, jerky, liquor and cigarettes are now sold only through a slot in the front door.

Small Native American pueblos across New Mexico are embracing extraordinary isolation measures that turn away outsiders as well as near-universal testing to try to insulate themselves from contagion with frightening echoes of the past.

“If the virus does reach us, that could be the end of Picuris,” said Wayne Yazza, the pueblo’s lieutenant governor.

A hundred miles (160 kilometers) west, the coronavirus has rampaged across the vast Navajo Nation, one the most populous tribes in the US. whose boundaries extend from northwestern New Mexico through portions of Arizona and Utah. That outbreak has public health officials concerned that Native American communities may be especially susceptible to the pandemic because of underlying health issues, including high rates of diabetes, obesity and heart disease.

For most, the coronavirus causes mild or moderate symptoms, such as fever and cough that clear up in two to three weeks. For some, especially older adults and people with existing health problems, it can cause more severe illness, including pneumonia and death.

New Mexico’s 19 indigenous pueblos — communities that range from several thousand members to just 300 — view the coronavirus as an existential threat after early infections raced through San Felipe and Zia pueblos, propagated in one instance by people attending a funeral.

“You hear about all these other big towns that are losing 10, 50, 100 — that’s already half of our whole tribe,” Picuris Gov. Craig Quanchello said. “We’ve got to do everything we can to protect our race here.”

Native Americans accounted for more than 55% of confirmed COVID-19 infections in New Mexico as of Friday, though they’re only 11% of the general population.

The stark discrepancy in part reflects extensive testing in the heavily Native American northwest part of the state, a hot spot for infections. Tribal leaders also say the surge of Native American infections and related deaths reflects chronic underfunding of health care services and basic infrastructure such as household plumbing.

The pueblos, whose homelands trace the upper Rio Grande as the river descends for 150 miles (241 kilometers) from Taos to Albuquerque and extend west near the Arizona line, have closed down cultural attractions, casinos and hotels.

Roadblocks against nonessential visitors extend to villages atop mesas in Acoma Pueblo’s “sky city” and on the Hopi reservation in Arizona, which is encircled by the Navajo Nation.

In Picuris Pueblo, roughly 200 residents in the core settlement have all tested negative for the virus. It’s been more than a month since the tribe erected a roadblock and guardhouse with video surveillance to intercept unannounced tourists. Tribal members also are screened for coronavirus symptoms, such as fever, by taking body temperature readings from each passing car and the occasional bicycle.

Among New Mexico’s pueblos, ceremonial rites and political meetings in compact subterranean kiva rooms have been upended, as have preparations for annual feast days — mass gatherings with traditional dancing and regalia.

In Picuris, preschool lessons in the native Tiwa language are on hold and children can’t exit the pueblo’s boundaries, even with parents. Families are encouraged to send one person for groceries — a 50-mile (80-kilometer) round trip.

New Mexico Gov. Michelle Lujan Grisham has extended through mid-May an aggressive stay-at-home order that bans gatherings larger than five people and requires arriving air travelers to self-quarantine while allowing some nonessential businesses to start offering curbside service after a weekslong closure. The northwest part of the state is on full-fledged lockdown as infections increase.

Pueblos are going further with their own curfews, and Picuris is vowing to stay on lockdown for an additional two weeks before considering any changes.

The pueblos have dealt with devastating contagions in the past. Bouts of smallpox — brought by Spanish conquistadors in the late-1500s — cut the Picuris Pueblo’s population from roughly 2,500 to 500 by 1650 in the first of several close brushes with annihilation, said Michael Adler, a professor of anthropology at Southern Methodist University. He leads a satellite campus outside Taos and has worked with Picuris Pueblo to explore its ancestral history.

In the 20th century, the pueblo’s population fell below 150 after brutal raids; it’s unclear whether the Spanish flu pandemic of 1918 played a role.

“It’s a story of decimation in spades — and resilience,” Adler said. “It amazes me that they’re still here.”

State officials say the coronavirus crisis was foreshadowed by the H1N1 swine flu pandemic in 2009. Native Americans experienced fatalities at four times the rate of the general public, according to a 12-state study — including New Mexico, Arizona, and Utah — published that year in the CDC’s Morbidity and Mortality Weekly Report.

“The reason I believe we saw this spike (in coronavirus infections) is that tribal communities live in largely rural areas and they live in large family units, multiple-family units, and they engage in community support, community activities,” New Mexico Health Secretary Kathy Kunkel said at a state PBS forum. “The very qualities that make tribal communities unique are the very qualities that put them at risk.”

Quanchello, the Picuris governor who covers late-night shifts at the roadblock, hopes to keep his people safe, even if it means loneliness, financial hardship and warning potential visitors to keep away.

“We don’t get a second chance here,” he said. “The endgame is death.”