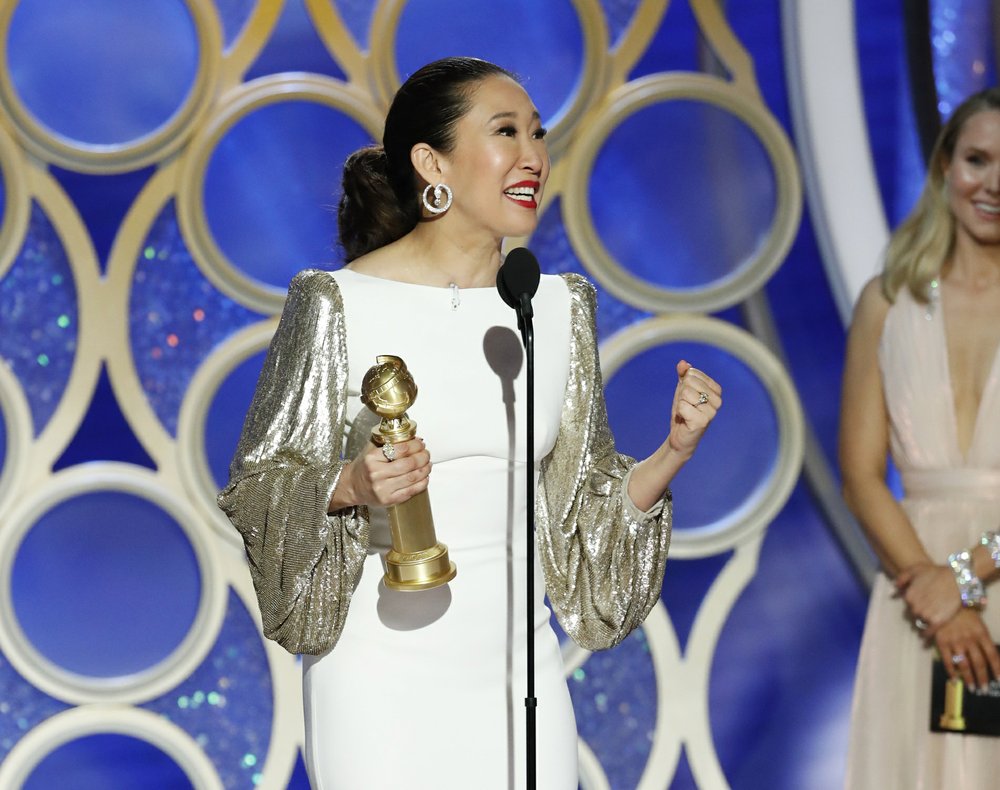 This image released by NBC shows Sandra Oh accepting the award for best actress in a drama series for her role in "Killing Eve" during the 76th Annual Golden Globe Awards at the Beverly Hilton Hotel on Sunday, Jan. 6, 2019 in Beverly Hills, Calif. (Photo: AP)

It was a moment when everyone — absolutely everyone — expected to see an ebullient Lady Gaga climbing to the stage in her dramatic periwinkle gown. Instead, a visibly stunned Glenn Close got the Golden Globe. But her deeply personal speech about women’s need for fulfillment outside the family soon had the crowd on its feet, providing the emotional highpoint of the night.

A year ago the Golden Globes were all about #MeToo and Time’s Up. A year earlier, it was all about politics. The 2019 Globes were much less overtly activist or political, but speeches by Close as well as co-host Sandra Oh and actress Regina King kept issues of equality and diversity alive in a more personal way.

Oh, and of course there was the usual Globes craziness: “Bohemian Rhapsody” as best drama? The groundbreaking “Black Panther” snubbed? And nothing for Bradley Cooper — really?

Some notable moments of the night, in no particular order:

THE POWER OF NICE

Taking the stage for their opening monologue, co-hosts Oh and Andy Samberg had an explanation for why they’d been chosen: they were “the only two people left in Hollywood who haven’t gotten in trouble for saying something offensive.” Then they riffed on that by pretending to roast people by actually saying nice things. (“Bradley Cooper: You are hot!” ″Jeff Bridges, I wish you were my Dad!”) The bit didn’t get uproarious laughs but was pleasantly, well, pleasant.

Was this the first time Satan got a shout-out in an acceptance speech? If so, we have Christian Bale to thank. The Welsh actor was accepting his award for “Vice,” in which he made a stunning transformation into a chubby and bald Dick Cheney. After thanking castmates and director Adam McKay, he extended a “thank you to Satan for giving me inspiration for this role.” He also mused that he might try to play Senate Majority Leader Mitch McConnell next.

A DECENT NIGHT FOR ‘OLD MEN’

“Mary Poppins Returns” may have gone home empty-handed, but 93-year-old Dick Van Dyke, who has a wonderfully spry cameo in the film, got a big ovation when he came out with Emily Blunt, who plays Mary. And Michael Douglas, winning his Globe for “The Kominsky Method,” exulted that “alte kakers rule!,” using the Yiddish term for “old man.” The 74-year-old actor also dedicated his award to his 102-year-old father, Kirk Douglas.

A TIME’S UP CHALLENGE

A year after the Globes carpet was a sea of shimmering black, worn in solidarity with #MeToo and Time’s Up, colorful gowns were back — though some attendees wore ribbons saying “TIMESUPx2,” marking the second year of the gender equality movement. On the carpet was actress Alyssa Milano, who sent the tweet that made #MeToo go viral; she noted that in the past year, a “really wonderful sisterhood has formed.” It was actress Regina King of “If Beale Street Could Talk,” though, who made the most memorable reference to Time’s Up, resisting the orchestra’s efforts to play her off, and vowing that in the next two years, her producing projects would be staffed by 50 percent women. She challenged those in other industries to do the same.

After an opener with Samberg full of zingers, Oh suddenly became emotional, explaining that she’d agreed to host the show — and overcome the fear — to celebrate the diversity of the nominated casts. “I wanted to be here to look out on this audience and witness this moment of change,” she said. “I am not fooling myself. Next year could be different. But right now this moment is real.” Soon after, Oh herself won best actress in a TV drama for “Killing Eve,” and thanked her parents, movingly, in Korean.

UP CLOSE AND PERSONAL

When Close won best actress in a movie drama, she seemed as shocked as everyone else. But then the 71-year-old actress made a heartfelt connection between her role in “The Wife,” in which she plays a wife who sublimates her own ambitions to those of her husband in a stunning way, and her own life. “I am thinking of my mom who really sublimated herself to my father her whole life,” Close said. She added that women are expected to be nurturers, “but we have to find personal fulfillment. We have to follow our dreams. We have to say, I can do that and I should be allowed to do that.” The crowd rose to cheer.

At least Lady Gaga didn’t go home empty-handed: She won as a co-writer for best song, “Shallow,” which she performs with Cooper in “A Star is Born.” In her speech, she too referred to the challenges women face, not in the film industry but in music. “As a woman in music it is really hard to be taken seriously as musician and as a songwriter,” she said, adding that her co-writers “lifted me up, they supported me.” Gaga wrote the song with Mark Ronson, Anthony Rossomando and Andrew Wyatt.

Not every speech had a serious tone to it. Olivia Colman, who won best actress in a musical or comedy for ‘The Favourite,’ in which she plays a comically troubled queen, told the crowd: “I would like to tell you how much this film meant to me, but I can’t think of it.” She also noted that one of her “favourite” things about making the film was that she “ate constantly through the film.”

WHAT WAS THAT, DUDE?

We’re not really sure what he was saying in his rambling speech accepting the Cecil B. DeMille Award — especially when he started talking about ships, and saying, “Tag, you’re it!” But hey, Jeff Bridges is best known as a stoner icon in “The Big Lebowski,” so it was sort of apt that he wasn’t so easy to follow. It was simply fun to experience his joy; it’s just too bad he wasn’t wearing a bathrobe. Harrison Ford, coming next, was even crustier than usual. “Nobody told me I had to follow Jeff Bridges,” he said.

WOW, SHE KNOWS ME?

It was a sweet red carpet moment as Elisabeth Moss, star of “The Handmaid’s Tale,” discovered that Taylor Swift was a fan. Ryan Seacrest presented her with a video from Swift, gushing about the show. “I can’t believe she even knows who I am!!” Moss exulted, showing that stars can sometimes be exactly like us.