CULTURE So bad for so long, does DC stand for District of Champions?

So bad for so long, does DC stand for District of Champions? 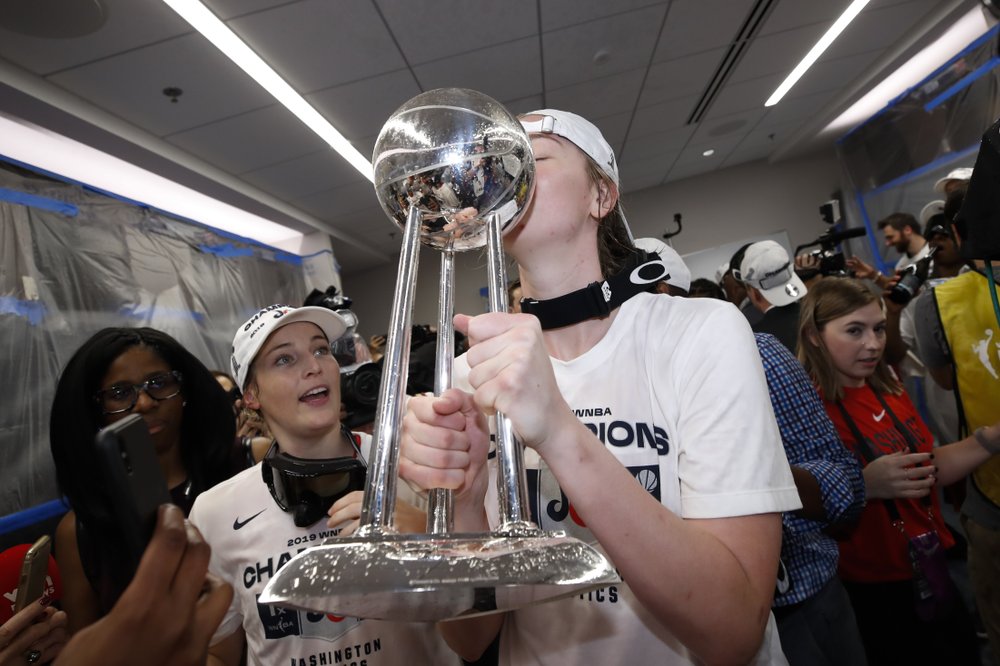 Washington Mystics center Emma Meesseman kisses the trophy in the locker room after Game 5 of basketball's WNBA Finals against the Connecticut Sun in Washington on Oct. 10, 2019. (Photo: AP)

As Sean Doolittle and the rest of the Nationals geared up for Washington’s first World Series appearance in 86 years, the lefty reliever thought back to when he first joined the team in a 2017 trade.

The attitude, he found, was not exactly reflective of a win-big mindset, much like the malaise that hung over the rest of the major professional sports scene in the nation’s capital at the time.

“There were a lot of people close to the team, around the city, that were like: ‘This is the year we’re going to do it! We’re going to get past the first round of the playoffs!’” Doolittle recalled. “And the new guys that got traded over were like: ‘What are you guys talking about?! We have a team that can win the World Series. What are we talking about?’ So I know people, DC fans, they had to wait a while.”

So bad for so long, DC is suddenly turning into the District of Champions. It’s no Boston, where there have been 11 titles in the past two decades, but things in Washington suddenly are a lot better than they’ve been.

The Nationals, for example, had never advanced in the playoffs until now, going 0-4 in NL Division Series appearances, including 0-3 in Game 5s at home. Now, though, they are the NL champs. To win the Fall Classic, they need to get past the Houston Astros, who are set to host Game 1 in the best-of-seven series Tuesday night.

Still, just getting this far is a big deal for the denizens of the District, who are not accustomed at all to this level of success.

Remember: For more than a quarter of a century, dating to the Redskins’ Super Bowl championship in January 1992, zero Washington teams won a title in Major League Baseball (which was absent entirely from the banks of the Potomac River from 1969 until the Montreal Expos arrived in 2005), the NFL, NBA or NHL. (Some will note: DC United won four MLS Cups from 1996-04.)

In that span, only once did a Washington representative even make it as far as the conference finals or a league championship series in any of the major four North American professional sports leagues: The Capitals lost in the 1998 Stanley Cup Final (they were swept, naturally).

That drought of 74 combined seasons without a championship finally was ended by the Capitals in 2018, when Alex Ovechkin and Co. got over their inability to get past the second round and wound up hoisting a trophy and hosting a parade down Constitution Ave.

So did that change everything for the city?

“Well, I hope so,” said Ovechkin, who threw out a ceremonial first pitch at Nationals Park during these playoffs. “We’ll see.”

His team’s triumph was followed by the WNBA title won by league MVP Elena Delle Donne and the Washington Mystics this month.

That’s not to say all is going perfectly in a place better known for politics than championships.

The Redskins, who won three Super Bowls in the 1980s and 1990s under Hall of Fame coach Joe Gibbs, are lost: They have won exactly one playoff game in the past 19 seasons, are currently 1-6, recently fired their head coach and tend to have more spectators rooting for opponents than the burgundy-and-gold at home games.

The Wizards claimed their only NBA trophy in 1978, haven’t been back to the conference finals or won 50 games since 1979, and are coming off a 50-loss season.

US Olympic women’s hockey gold medalist Haley Skarupa grew up in the Washington suburb of Rockville, Maryland, and still lives there. So she’s familiar with the difficulty of growing up a DC fan.

“It was a lot of ups and downs,” Skarupa said, “but emphasis on the downs.”

“The passion around sports in DC has always been there, and now that teams are being successful and winning, it’s that much more amplified, which I didn’t even think could’ve really happened,” she said. “To see it all kind of come together now, it’s very special, and I’m very excited to see what DC sports does in the future.”