A promising goalkeeper who was being monitored by European clubs. A defender who hoped to become a professional player like his cousin. A forward who wanted to follow in the footsteps of international striker Diego Costa. 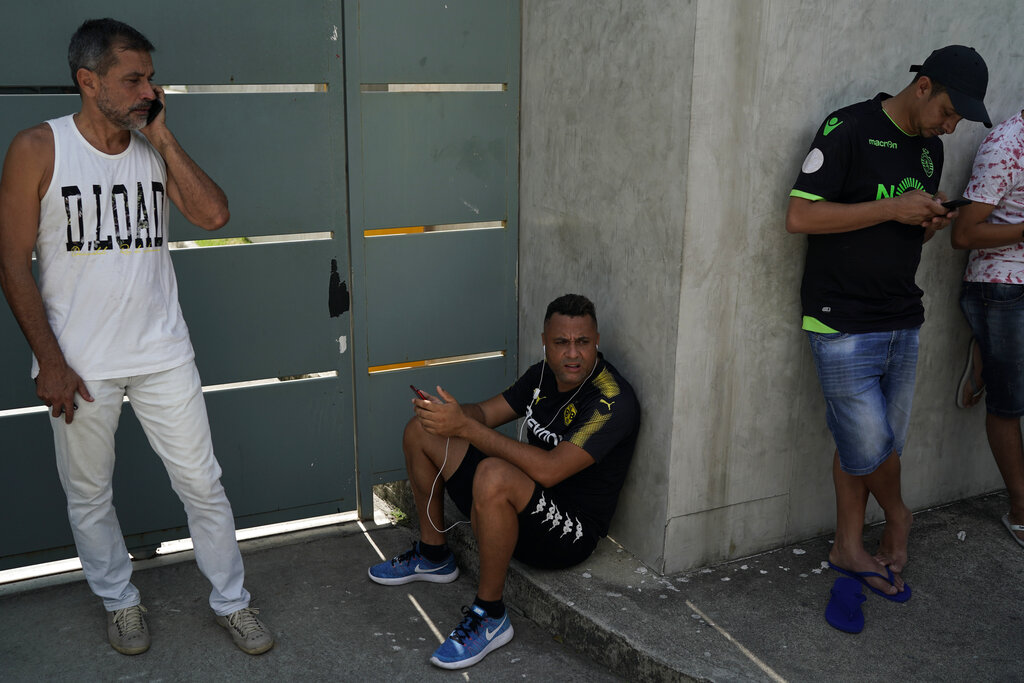 People stand at the entrance Flamengo soccer club training complex as they wait for informations about the victims of the fire at the site, in Rio de Janeiro, Brazil, Friday, Feb. 8, 2019. (Photos: AP)

Each carried similar goals and hopes. Each left family behind to try to make it as a professional player. Each dreamed of one day becoming the next Brazilian soccer star.
And they were closer to making it than most Brazilian youngsters, having reached the youth academy of one of Brazil's most popular clubs.
They all had big dreams, but their futures and their families were shattered when a fire tore through their sleeping quarters at Rio de Janeiro club Flamengo on Friday.
They were among the 10 people killed at Flamengo's sprawling Ninho do Urubu training ground in what the team's president called "the worst tragedy to happen to the club in its 123 years."
The young victims included goalkeeper Christian, 15, who was a regular in Brazil's youth teams and reportedly had already attracted the attention of several top clubs in Europe. Defender Pablo, 14, had been with Flamengo since last year and his cousin, Werley, was already playing professionally with rival Vasco da Gama. Forward Athila, 14, had joined Flamengo from the same academy where Atletico Madrid striker Costa played as a teenager before thriving internationally.
"Sad news," Real Madrid forward Vinicius Junior said on Twitter.
Vinicius Junior, not long ago, was in a similar position as the youngsters who died in the fire.
He lived in the same complex destroyed on Friday before being bought by Real Madrid for nearly 45 million euros (now $51 million) less than two years ago. 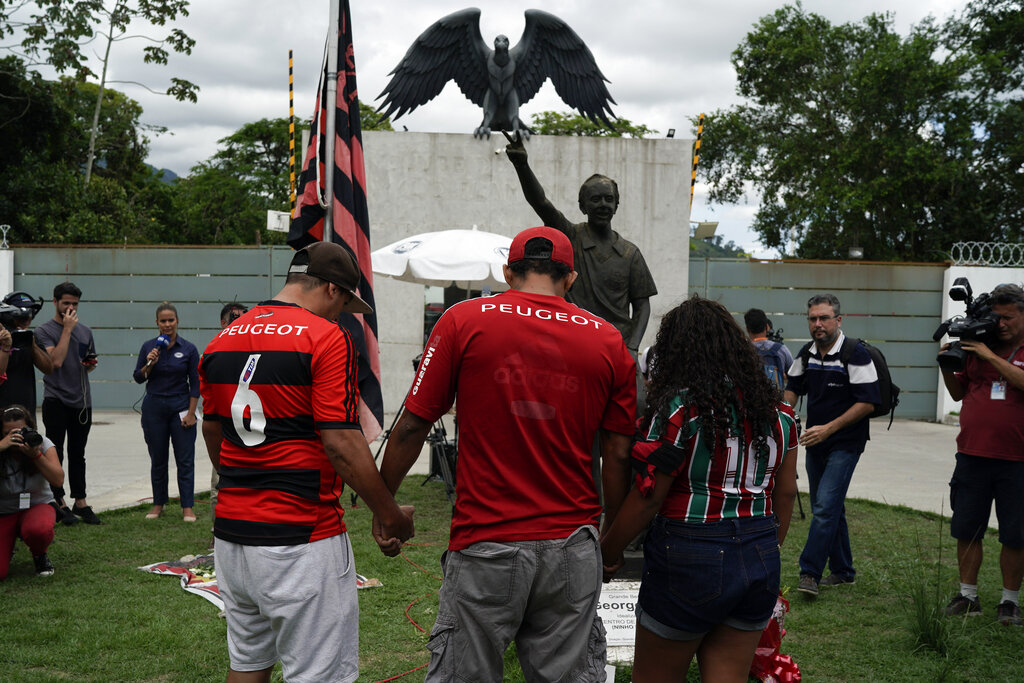 Fans hold hands as they pray in a homage to the victims of a fire at the Flamengo soccer club training complex in Rio de Janeiro, Brazil, Friday, Feb. 8, 2019.

"It gives me the chills to remember the nights and days that I spent at the training center," the 18-year-old Brazilian said. "I still can't believe it, I'm praying for all of them."
Making it to a top European club, like Vinicius Junior did, is what most kids hope for when they join the youth academies of clubs in Brazil. They usually give up a lot just to have a chance of being part of them, with their families often making a series of sacrifices along the way.
"The goal for kids in all different parts of the world, and especially the developing world, is getting into a brand name club," said Sebastian Abbot, author of "The Away Game: The Epic Search for Soccer's Next Superstars."
"Their ultimate goal is to become a superstar and play in Europe someday," he said.
That is part of the reason many parents go out of their way to help their kids make it to these academies, as one good contract with a top club can change the lives of generations to come. It's why they accept having their kids leave home at an early age to try to make it as a player, often sending them thousands of kilometers (miles) away so they can have a shot at succeeding.
Because of the visibility of the top academies, it's common in Brazil for agents and scouts who have good connections with the clubs to make demands from parents to guarantee their kids a place in the main youth programs. The demands can include unfair commission fees in contracts or the abdication of any control over the youngster's future career.
Top clubs like Flamengo take on the young prospects and give them housing, food and help pay for their studies, which usually is more than the families can provide.
But conditions are not always ideal, even at some of the most traditional Brazilian clubs. 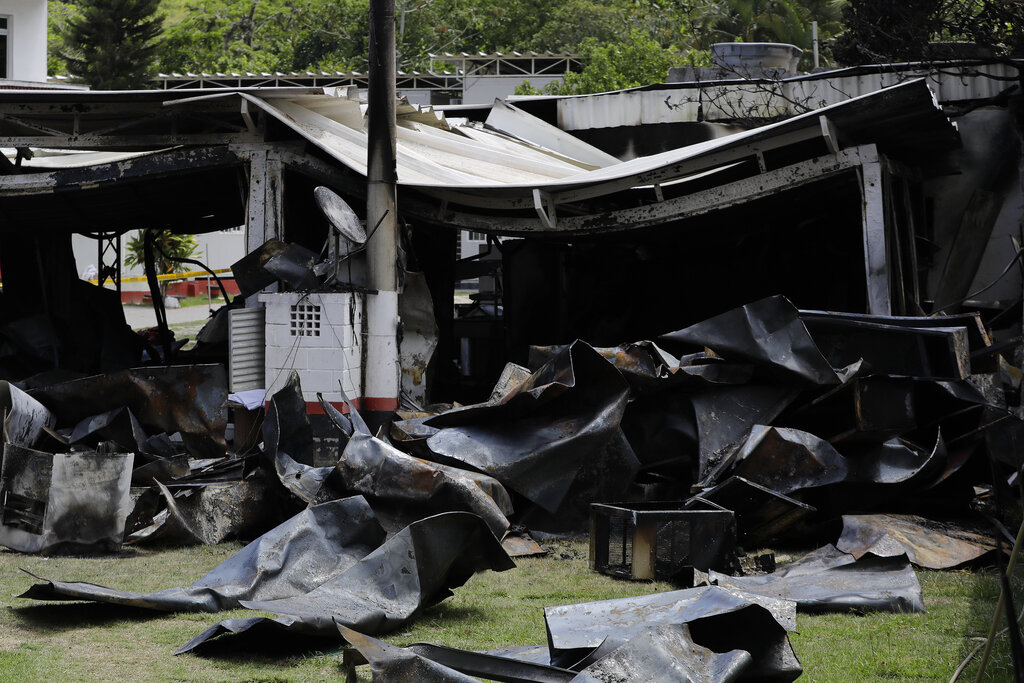 In 2012, a judge ordered the temporary closure of some of Vasco da Gama's youth training centers because of alleged poor conditions offered by the club to its young players. Authorities said at the time the youngsters didn't have proper access to food and water and lived in inappropriate housing facilities.
Vasco, the club where Barcelona playmaker Philippe Coutinho played as a youngster, has improved its youth program since that incident. And most teams have been investing more in their academies recently, as it often can be their biggest source of revenue.
Flamengo sold midfielder Lucas Paqueta to AC Milan for 35 million euros ($40 million) last year, while Real Madrid spent 45 million euros ($51 million) on young Santos prospect Rodrygo in 2017. Brazilian champion Palmeiras earned more than 30 million euros (now $34 million) when it sold youth-academy player Gabriel Jesus to Manchester City in 2016.
On Friday, a group of talented youngsters lost their chance of becoming the next star to come out of Flamengo, including 14-year-old goalkeeper Bernardo.
"Bernardo gave up a lot to be a professional athlete," his cousin, Marcelo Lanznaster, told the G1 news portal. "He gave up on a good part of his adolescence. He was aware that he was only starting this journey, but that he had the potential. The coaches said that he would get far and we all believed in that dream."
Cover image: A fan holds a Flamengo flag as he and other fans pay a homage to the fire victims at the entrance Flamengo soccer club training complex in Rio de Janeiro, Brazil, Friday, Feb. 8, 2019.