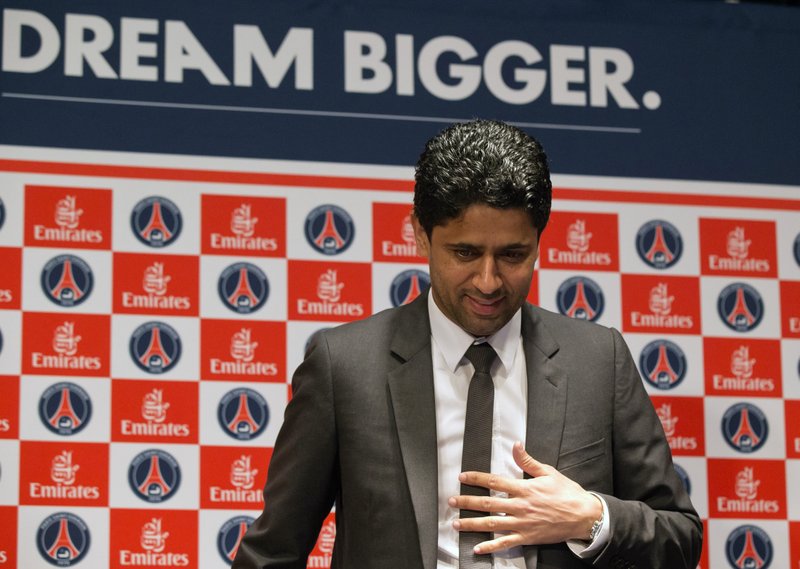 The president of French soccer champion Paris Saint-Germain is the latest sports official implicated in a sprawling five-year corruption probe that keeps spreading.

Prosecutors in France have implicated Nasser al-Khelaifi — who leads Qatar-owned PSG, is chairman of Qatar-owned broadcaster beIN Sports, and sits on the executive committee of European soccer body UEFA — in “active corruption.” They linked him on Thursday to payments allegedly helping Doha win hosting rights for track and field’s world championships.

The IAAF, track’s governing body based in Monaco, is at the core of allegations of bribery, extortion and systematic doping.

The wider case led to exposing state-backed Russian doping at the 2014 Sochi Olympics.

Here’s a look at the scope of the French investigations:

She paid some prize money to athletics officials to ensure her doping stayed hidden.

In 2014, when she was eventually banned, she turned whistleblower. German network ARD alleged in a landmark program about Russian doping that Shobukhova received a 300,000 euro ($336,000) refund for her cheating being exposed.

The payment came from a Singapore account called Black Tidings linked to Papa Massata Diack. His father, Lamine Diack, was the IAAF president for 16 years and one of the most influential African members of the International Olympic Committee.

After the German broadcast, the World Anti-Doping Agency created an investigation team to verify allegations.

In November 2015, a devastating first report by the WADA team detailed orchestrated doping in Russian track and field, and IAAF complicity.

The IAAF’s treasurer and Russian athletics federation head, Valentin Balakhnichev, was accused of extorting athletes with the threats of bans for doping.

Russia had “sabotaged” the 2012 London Olympics by sending athletes who should have been banned, wrote the investigation team, which included Canadian law professor Richard McLaren.

French prosecutors put Diack under formal investigation for corruption and money-laundering. The 85-year-old Senegalese is under house arrest, and was indicted this week.

The WADA report exposed the key role of Grigory Rodchenkov, the director of drug-testing laboratories in Moscow and Sochi, in the conspiracy.

Rodchenkov’s life choices as the scandal deepened were filmed for the Oscar-winning documentary Icarus .

Fearing for his life in Russia, Rodchenkov fled to the United States and entered a witness protection program.

In May 2016, he made explosive claims to the New York Times about a Russian government-backed plan for athletes using steroids to win Sochi Olympic medals. Tainted samples were swapped in Rodchenkov’s lab for pre-stored clean urine.

WADA ordered a second investigation by McLaren. His interim findings led to Russia sending a track and field team of just one long jumper to the Rio Olympics.

After the full McLaren Report was published, the IOC let Russian athletes compete at the 2018 Pyeongchang Olympics only after extra vetting.

Frank Fredericks was among the world’s fastest men in the 1990s. The Namibian won silver medals in the 100 and 200 meters at back-to back Olympics.

In October 2009, he was an IOC member when Rio de Janeiro was voted the 2016 Olympics host. Chicago’s bid, with last-minute lobbying by President Barack Obama and Oprah Winfrey in Denmark, was eliminated in the first round.

That day, Fredericks received a $300,000 payment, allegedly from a Brazilian businessman via Papa Massata Diack. Fredericks was charged in November 2017 by French prosecutors who suspect a vote-buying plot.

The Rio Olympics organizing head, Carlos Nuzman, was arrested by Brazilian authorities working on the case with the French.

“The Olympic Games were used as a big trampoline for acts of corruption,” federal prosecutor Fabiana Schneider said then.

Takeda acknowledged approving paying $2 million from the bid to Black Tidings before the 2020 Olympic vote. He denied wrongdoing but resigned, and lost his IOC membership .

The role of Japanese marketing giant Dentsu was questioned. Before retiring, Lamine Diack extended the IAAF’s long-standing commercial partnership with Dentsu through 2029.

A spin-off from Qatar’s win in 2010 to host soccer’s 2022 World Cup was deeper investment in sports.

Nasser al-Khelaifi, a former tennis professional, ran both in Paris.

On Thursday, Paris prosecutors confirmed al-Khelaifi — along with beIN’s CEO in Paris — was being investigated over suspicious payments by a Qatari investment fund in 2011. They totaled $3.5 million days before the IAAF vote choose its 2017 world championships host. London beat Doha, but the 2019 edition later went to Qatar’s capital city.

Al-Khelaifi’s lawyer said the money legitimately was for commercial rights, and most went on to Dentsu and the IAAF.

The money passed through an agency founded by Papa Massata Diack. He is believed to be in Senegal, where he has been the subject of an Interpol order, and not cooperating with French authorities.

The IOC has said it is offering whatever help French authorities need.