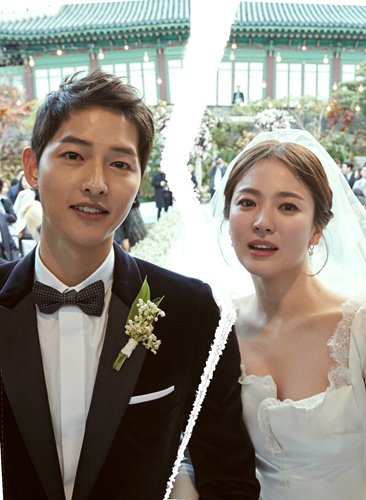 Public image is crucial to celebrities, their sense of morality, social responsibilities, and of course, their marriages. Chinese netizens have lately been bombarded with news of splits between several couples - the divorce of South Korean actor Song Joong-ki and actress Song Hye-kyo came on the same day when China's most famous actress Fan Bingbing and actor Li Chen announced their breakup on Sina Weibo on June 27. On Sunday, well-known Chinese actor Wen Zhang announced on Sina Weibo that he had divorced actress Ma Yili, causing a sensation on the internet.

The two famous Chinese couples all expressed their good wishes to their partners in the announcements.

Li and Fan publicized their relationship in 2015 in simultaneous posts on Sina Weibo that contained a photo and the sweet words "We". Although Li proposed to Fan in 2017 and the latter accepted, the two never got married. When they released the news of their split, Li wrote "the shared trust and support between us will remain the same forever. We are no longer 'we,' but we are still us".

Wen also expressed his sorrow and affection in a post written in classical Chinese and declared that he would consider Ma a family member for the rest of his life given that they were married for more than a decade and have two children.

Wen's marriage put him under the limelight. Wen married Ma in 2008 when he was 24 years old and Ma was in her 30s. This big-sister-and-little-brother relationship was the talk of the town back then. Wen became an increasingly popular actor in China due to his role in hit TV series Naked Wedding and the film Love is Not Blind in 2011, which were both about romantic relationships. He embraced this golden time in his career, and audiences were looking forward to more works from him. However, his career soon slammed to a halt when it was revealed he was having an extramarital affair with actress Yao Chen in 2014 while his wife was pregnant with their second child.

On June 17 Wen, who does not often post on Sina Weibo, posted two pictures of a dog with the message: "welcoming the arrival of you, a promise needs to be preserved for a lifetime".

After Wen announced the divorce, Ma posted on Sina Weibo two minutes later: "There is no right or wrongdoing in our relationship. We will be happy separately going forward in our lives".

It seems that such a "tacit" understanding didn't exist between the South Korean couple. The two Songs issued their official statements about their divorce mediation through their lawyer and entertainment agency. In his statements, Song Joong-ki expressed his hopes to end the marriage soon, while Song Hye-kyo attributed their marriage's failure to different personalities. This led to the media and the public to wonder about the true reasons behind the death of their short marriage.

On Sunday, news went viral on Sina Weibo that nine media agencies had recieved a warning from a South Korean media morality institution for defamation. It was also reported that the South Korean star had previously said she was considering reducing her presence in the entertainment industry for the remaining half of the year to leave behind the influence of the divorce news.

Marriage is a big deal in Asia where people are relatively conservative. And it is certainly an even bigger deal when it comes to celebrities. When love vanishes, not only will their personal lives be affected, but also their careers. Sending best wishes to one another may be a good public relations tactic.