CULTURE Some smelly Chinese dishes you need courage to try

Some smelly Chinese dishes you need courage to try

Many people may hesitate when coming across foods that give off a strong stinky odor: To eat or not to eat, that is the question. 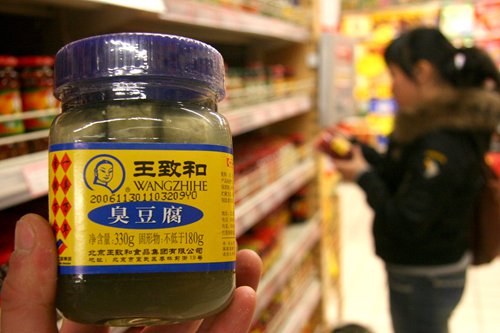 However, there has always been a segment of the population who are obsessed with foods that give off strange and intense odors.

Surströmming, stinky fermented herring, is a traditional Swedish food that almost always appears at the top of various lists of the world's stinkiest foods.

While many may turn their noses up at the notoriously strong odor of Limburger cheese, numerous people from Belgium and the Netherlands believe it's the perfect fit for a sandwich.

In Nigeria, the Yoruba and Edo peoples cannot live without Iru, a condiment with a pungent odor made from fermented locust beans.

Another kind of fermented bean, Natto is more familiar to people who live in East Asia. Sticky and stinky, this traditional Japanese food is still popular in Japan and loved by many people.

China, regarded as a heaven for food lovers, also has its own obsession with stinky delicacies.

While some of these dishes may shock the olfactory senses at first, our advice is to keep an open mind and not judge a dish by its scent.

It's probably best to start with the easiest to handle dish: stinky tofu.

For beginners, Changsha's fried tofu is the better choice. Deep frying is the most common way to prepare stinky tofu, so you can find this type in every night market in China. Although it still has a strong odor, the scent of the famous roadside snack is much lighter than the raw pickled soybean curd found in Beijing. With a crunchy and crispy fried surface, Changsha's fried stinky tofu is soft and juicy on the inside.

Most fried stinky tofu has a black or dark gray surface, but that doesn't matter, flavor is what's important as nobody eats with their eyes.

If you want a bigger challenge, Wangzhihe's Stinky Tofu is a must-try. Dating back to 1669 during the Qing Dynasty (1644-1911), Wangzhihe has now become one of China's time-honored brands.

With a sticky surface, Wangzhihe's Stinky Tofu is smellier than the fried version. Even many Chinese people instinctively reject it when they open a jar of this gray tofu and get a whiff of its strong pungent odor.

More often seen in the northern China, Wangzhihe's Stinky Tofu is always eaten with steamed buns. There's a Chinese saying that describes the magic of it: "Smells horrible, tastes wonderful."

Although stinky tofu has a strong odor, it really doesn't hold a candle to the "Three Stinks of Ningbo."

Ningbo is a city in East China's Zhejiang Province, where locals are crazy about stinky dishes and have a long tradition of making them. In Ningbo, chou (lit: stinky), is considered its own special way of cooking and preserving food. Specifically it refers to fermenting food, such as vegetables, in viscous and salty brine.

"How can people eat that? It smells like poo!" Netizen Haishi Laolong posted on Sina Weibo.

"The terrible smell makes me doubt my life. It's the smelliest food I've ever tried!" said netizen Chenaikuailuoding.

Although most Chinese cannot stand their intense odor, the fact that the techniques used to make these dishes have persisted down the ages, passing from generation to generation, just goes to show how delicious they are.

Netizen Jin Laome said: "Stinky amaranth stalks are the perfect topping for rice. I can never get enough."

Friendly tips: Do not try to eat any of the "Three Stinks" by themselves if you want to walk away unscathed from these "chemical weapons," the best way to enjoy them is to first steam them and then sprinkle them with sesame oil. 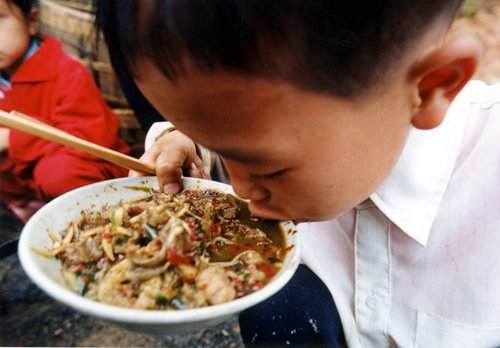 Hot pot is one of the most popular ways to cook in China.

Hot pot broth can come in many different flavors, from tangy to spicy, and of course it can also be smelly.

Niu bie hot pot is a special delicacy in the southeast part of the mountainous Guizhou Province in Southwest China.

Briefly speaking, niu bie is a kind of soup made from the partially digested food found in a cow's rumen, the largest chamber in a cow's stomach.

Before cooking niu bie, fine grass and herbs are fed to the cattle in advance. After the animals are slaughtered, the undigested food in the stomach is removed and a green smelly liquid is squeezed out of it. Then herbs and condiment like ox gall, Chinese prickly ash, ginger, orange peels and bay leaves are added to the mix, which is then boiled into the hot pot broth.

Although niu bie smells like rotten grass and cow dung, which it nearly is, many tourists enjoy taking pictures of themselves courageously trying a bite of the dish. According to locals, niu bie is good for one's stomach.

"I was told it was delicious, but I didn't dare try it," said netizen Keaiyoumiren.

"I tried it once. It tastes bitter at first and then a little bit sweet," said netizen Blue Leek.