South Africa won the Rugby World Cup for a record-tying third time on Saturday, using its power at the set piece to seize control before scoring two clinical late tries through its wingers in a 32-12 victory over England. 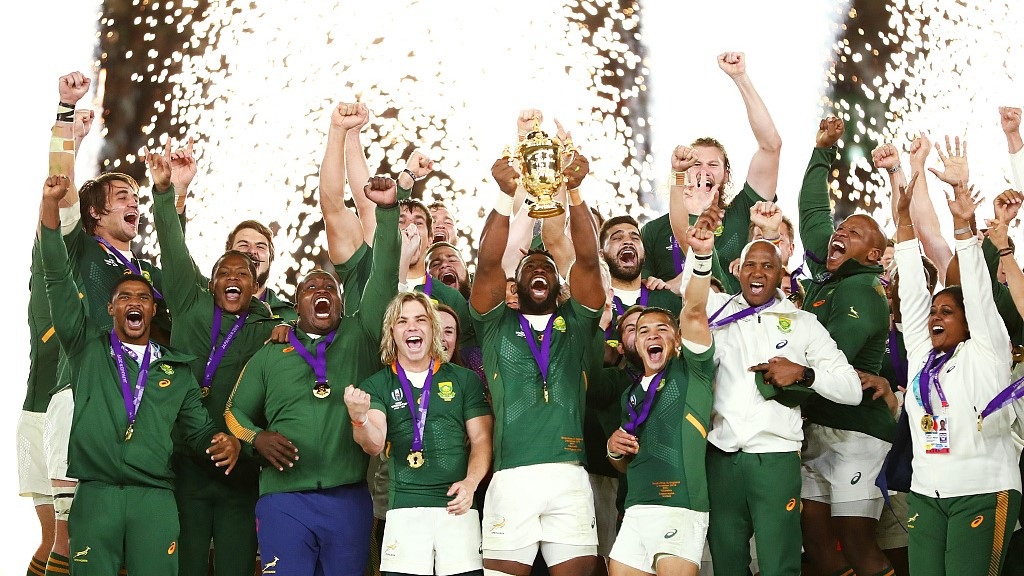 It is three from three in finals for the Springboks, after previous wins in 1995 and 2007, and they have finally scored a try in a title match, too, with Makazole Mapimpi and Cheslin Kolbe crossing out wide in the final 13 minutes.

That Mapimpi and Kolbe scored the tries and Siya Kolisi led the Boks out as captain made this a poignant and transcendent night for a country still trying to fully emerge from the apartheid era.

Kolisi thanked all South Africa, from the people on the farms and in the townships and in the streets.

''We can achieve anything if we work together as one,'' said Kolisi, who last year became the first black player appointed as Springboks captain.

The win also ensured the Springboks became the first team to lose a game and rebound to win the title, having lost their tournament-opening game last month to the two-time champion All Blacks in the pool stage.

England was outplayed in every aspect in a flat display in Yokohama, a week after delivering possibly the greatest performance in its history to overwhelm the All Blacks in the semifinals. Their players slumped to their knees at the final whistle, lock Maro Itoje hurling scrum cap into the ground.

But the Springboks didn't let them play, putting on the squeeze at the scrum — where they won four of flyhalf Handre Pollard's six penalties — and using their rolling maul to great effect.

Leading 18-12 with a quarter of the game left, the Springboks opened up and showed the other side of their game.

Mapimpi kicked ahead from the left wing and was on hand to receive a pass from center Lukhanyo Am to race over near the posts in the 67th minute.

Kolbe's try was even better, the right winger scampering down the touch line before sidestepping England captain Owen Farrell and running through unchecked in the 74th.

It was 24 years ago when the Springboks won their first World Cup title in front of the late Nelson Mandela, a year after he became president in a democratic election after decades of racial segregation and his own imprisonment for 27 years.

Two years ago, South African rugby was on its knees — beaten 57-0 by the All Blacks and losing by a record margin to Ireland. Rassie Erasmus came in as coach in February 2018, got the team playing to its strengths and the Boks are world champions for the third time from seven editions they have played.

New Zealand has also won the biggest prize in rugby three times, but having played in nine tournaments.

Virtually flawless against New Zealand, the English looked rattled from the start against South Africa. They lost prop Kyle Sinckler to a concussion inside three minutes, conceded six penalties — three at the scrum — in the first half, and their passing and restart work was sloppy.

The Springboks looked more pumped before kickoff — Kolisi shaking with adrenaline, looked to the sky as he belted out the national anthem — and dominated the collisions and the set piece wasn't even a contest.

Pollard missed his first shot at goal, but regrouped to kick his next four and give the Boks a 12-6 halftime lead. Owen Farrell replied with two for England, which was fortunate to only be six points adrift at the break.

When Pollard landed another from 10 meters in from halfway early in the second half, South Africa held a nine-point lead that seemed unassailable the way the match was going.

There looked to be a turning point when England finally won a penalty at the scrum, soon after prop Joe Marler entered as a replacement for Mako Vunipola. Farrell's kick made it 18-12 in the 59th minute but that was as close as the English got in a final they never led.

Maybe they did play their final last weekend, as some of their fans feared. Maybe beating Australia, New Zealand and South Africa in a two-week span was just too much.

Eddie Jones, an Australian brought after the wreckage of the 2015 World Cup that England hosted but didn't even get out of the pool stage, got the team to the top of the rankings — his first aim after taking charge.

But he couldn't deliver a second title for England, after the class of 2003. Jones was also on the losing end in '03 as Australian coach.