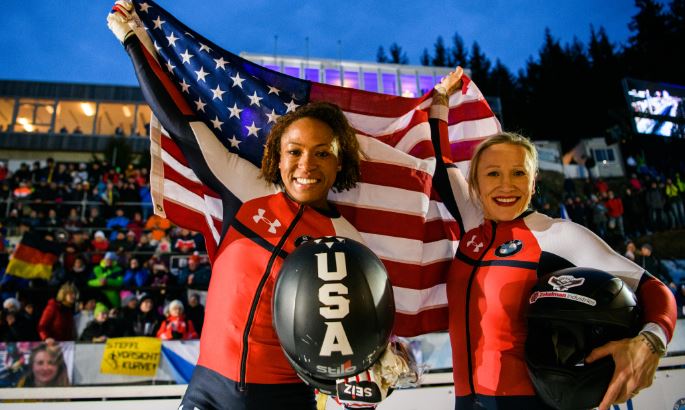 Kaillie Humphries and Lauren Gibbs clinched their first title as a team in early February in Altenberg, Germany, when they won the world championship.

At that time, the coronavirus had not been declared a pandemic and restrictions on travel to the US from Europe had yet to be implemented, so the 2019/20 bobsled world championship was one of the very few international sporting events that wasn’t curtailed by COVID-19. 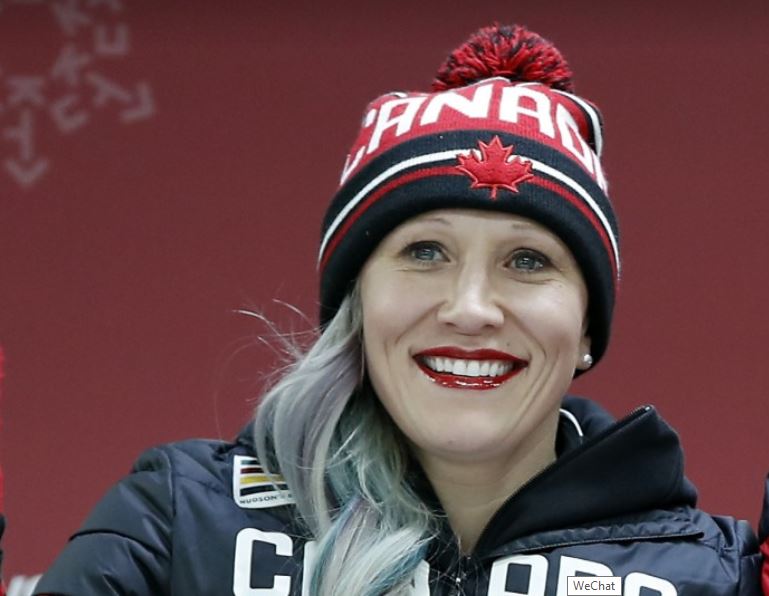 For Humphries, it was her third world title having previously won two championships competing for Canada. She switched from the Canadian national team to the American bobsled team in 2019 following an investigation into a harassment claim that she lodged in 2018.

Humphries lodged a verbal abuse claim against the head coach and members of Bobsleigh Canada Skeleton. The case is ongoing and due to irreconcilable differences, she sought to compete for the USA.

Humphries, who lives in San Diego with her American husband and former US bobsledder Travis Armbruster, was paired with Gibbs, who’s based in Los Angeles, for this past season.

Humphries, the team pilot, or driver at the front of the sled, said the feeling of winning her first title for the US was awesome.

The victory also marked the first time in bobsledding history that one athlete has won a world championship for two different countries.

"There was a justification that came with it,” said Humphries. “To know that the team supported me and that I was able to perform at my best." 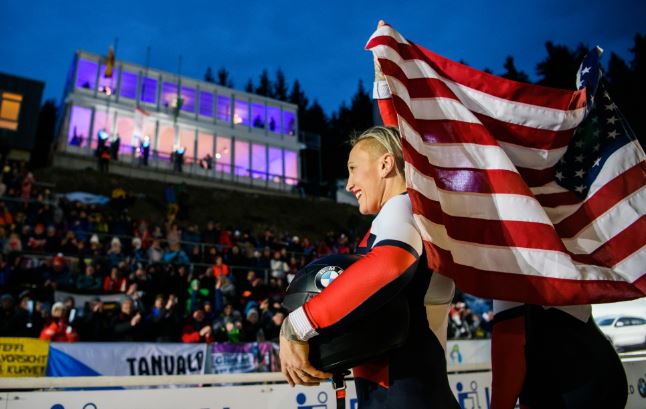 Kaillie Humphries and Lauren Gibbs hold up the US flag after winning the 2-woman bobsled world championship in Altenberg, Germany in Feb. 2020. (Photo: AP)

Humphries said her pairing with Gibbs, who is the brakeman on their team, has been seamless as they have trained together for several summers in Scottsdale, Arizona. They were also on opposing teams at the 2018 Winter Olympics in Pyeongchang, South Korea, where Humphries won a bronze medal for Canada.

"I got to know Lauren as a competitor and now as a teammate," Humphries continued. "She's super hard working, very motivated and she has so much passion inside of her to get the best out of herself, and as a teammate, that's all I can ask for.”

For Gibbs, the win in Germany represented her very first world championship, a victory she regards as particularly special.

"We put together a plan as a team," she said, adding that, "everybody comes with a plan and an idea of how things are going to go, so for it to come to fruition was very special.

"I think especially after what Kaillie went through in the last year or so and us learning to work together, for it all to come together with a win in the end was great."

Gibbs said during their time in Arizona as training partners, she and Humphries often joked about potentially competing together in some capacity and while neither thought it was a possibility, now that it has happened it makes perfect sense.

Humphries said she and Gibbs are definitely aiming to compete at the 2022 Winter Olympics in Beijing, when for the first time, a new event, a single bobsled event called monobob, will debut for women.

"I would love to be able to compete in both events in Beijing," said Humphries. "That's the plan, that's the goal. We'll see what happens."

Gibbs concurs, saying she likes to plan ahead and the Winter Games in China in 2022 is an unparalleled goal.

"I take it season by season and of course winning gold in Beijing is the ultimate goal, but I have to get through two more seasons in order to do that," she said.

"For me, it's just adapting my training and applying what I've learned from this past season and going into it healthy and preparing for life after sports as well.”

The International Olympic Committee says with a vision of “Joyful Rendezvous upon Pure Ice and Snow,” Beijing 2022 will build on the legacies of the landmark Beijing 2008 Olympic Games and expects to encourage millions of people across China to embrace winter sports.

Beijing will host all the ice events, while Yanqing, a suburban district of Beijing (80km to the northwest) and home to the famous Badaling and Juyongguan stretches of the Great Wall, is to host the alpine skiing and sliding events.

Zhangjiakou, in neighboring Hebei province, will host all the other snow events in its Chongli district, a popular skiing destination.