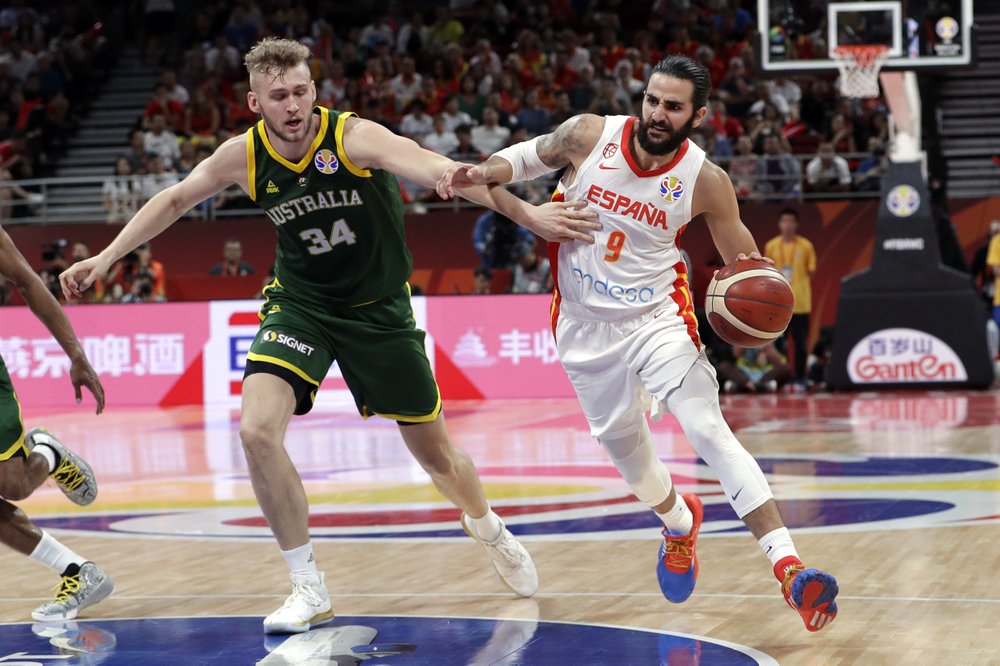 Ricky Rubio of Spain, right, drives past Jock Landale of Australia during their semifinal match in the FIBA Basketball World Cup at the Cadillac Arena in Beijing, Friday, Sept. 13, 2019. (Photo: AP)

No one on Spain’s basketball team is looking past Sunday’s World Cup final.

Certainly not Marc Gasol, who scored 33 points to lead the Spanish over Australia 95-88 in double overtime on Friday in the semifinals. Ricky Rubio scored 19 points and Sergio Llull added 17.

Spain will next face Argentina, which defeated France 80-66 in the other semifinal game.

Gasol won the NBA title a few months ago with the Toronto Raptors. And now he can do the double by winning with Spain, which won this title 13 years ago when it was called the world championship.

What would gold mean?

“Let’s talk about it Sunday,” replied Gasol, who played on the 2006 team with his brother Pau and current team member Rudy Fernandez. “Let’s see how it goes. I don’t want to lose a second thinking of what would be, what it would mean for us.”

He said his attention is on detail and preparing. Not celebrating. Not yet.

“Whenever the game is over, life will go on either way,” he said.

It was two 3-point shots by Llull in the second overtime that pushed Spain to one of its largest leads of the game after trailing much of the time.

Australia will try again for a bronze medal in a major men’s basketball championship. The Boomers are 0-4 in third-place games in the Olympics — including three years ago in Rio de Janeiro — and had never reached the semifinals of the World Cup.

“The experience that we had in Rio — what it felt like to finish fourth. I have the confidence that this group will be able to be well and truly refocus,” Australia coach Andrej Lemanis said.

Spain trailed for much of the game but surged in the fourth quarter and took the lead 71-70 when Gasol hit two free throws with 8.7 seconds to play in regulation.

Mills had two free throws to win the game with 4.8 seconds to play, but he missed the second after making the first to send the game into overtime at 71-71.

Both teams had chances to win in regulation and in the first overtime, which ended 80-80.

Spain last won the World Cup — known previously as the World Championship — in 2006 in Japan with players like Rudy Fernandez, Pau Gasol and Marc Gasol. Fernandez and Marc Gasol are still on the team. It was Spain’s only title.

Argentina won the first event in 1950 and was the silver medalist in 2002.

Australia has never won the title, and never been a medalist.

According to FIBA, it was the seventh game that went into double overtime in World Cup (and its predecessor, the world championship) history. And it was the first to occur in a medal round.

Germany, behind 47 points from Dirk Nowitzki, beat Angola 108-103 in triple overtime in the 2006 world championship. Another five games before Friday went double overtime, most recently Germany’s 82-81 win over Serbia in 2010.

It was the first double OT game for either Spain or Australia in any World Cup.

The Wukesong arena in west Beijing, the venue for the finals and semifinals, was built for the 2008 Olympics. Since then it’s been rebranded as the Cadillac Arena. The baseball venue for 2008 was nearby but is long gone and replaced by a subway and shopping area.