CULTURE Spain sex workers left to fend for themselves under lockdown

Spain sex workers left to fend for themselves under lockdown 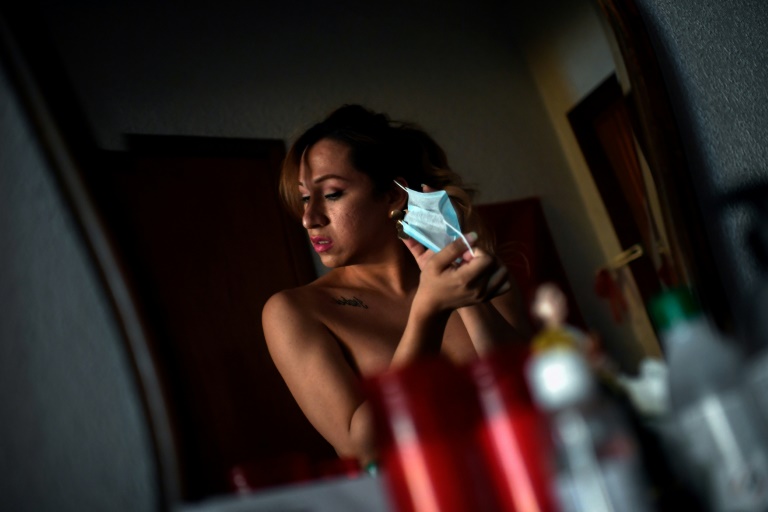 Beyonce, an Ecuadoran sex worker in Madrid, says the pandemic has brought business to halt and left her wondering how to pay the bills. (Photo: AFP)

With the coronavirus pandemic emptying the streets of Madrid, life has become even more precarious for sex workers Evelyn, Alenca and Beyonce under the lockdown.

Already extremely vulnerable and with an ambiguous legal status, many of Spain's sex workers have struggled to make ends meet during the state of emergency, with clubs closed, clients staying home and fines for staying in the street.

"The club owners in Spain, those who could, just threw all the girls into the streets," Evelyn Rochel, the only one who agreed to give her real name, remarks bitterly.

"The management says we pay these 2,100 euros for the room, they say it's rent, but that's a lie, I'm paying for the right to work," she says.

There were 15 women at the club, most from Latin America, but almost all have left, according to Rochel.

She says she was allowed to stay but made to feel as if it was "a humanitarian gesture, and not the right of an employee who deserves somewhere to live".

Despite her situation, Rochel is a hardened activist who last year forced the courts to acknowledge there is an employment relationship between a woman working as a hostess and the owners of the club, in a case involving one of Madrid's best-known brothels.

She's also a member of OTRAS, the unofficial union of Spanish sex workers set up in 2018 in a country where prostitution is neither legal nor illegal, but is not recognised as employment.

The crisis has exposed what she says is a "shocking" paradox.

"It can't be that the big club owners, as businessmen, can legally furlough the waitresses, the cleaners and everyone else with a contract but throw the prostitutes onto the street, those who can't get help because they're not recognised as employees," she said.

"That is just not right, we can't carry on like this."

With all the clubs and bars shut down, "those who can get work online are doing it on the sly", either hosting clients at home or at their house, despite the risks.

It's something she's considering.

"You've got to be able to feed your kids."

Alenca arrived in Madrid in October after fleeing violence against transgender people in her native Mexico.

When she couldn't pay her rent in April, the estate agency threatened to throw her out but she received legal help from OTRAS which also provides food packages.

Before switching on the webcam, she carefully makes herself up and puts on a wig.

"I don't like it, I feel really exposed," she says.

"There are people who can record these sessions and I don't want it getting out. I'm not ashamed of what I do but I don't like people filming me because one day I want to change my life."

For Beyonce, a 34-year-old trans woman from Ecuador, a normal work day means standing on a street in the Villaverde industrial zone, Madrid's red-light district, and getting into clients' cars.

But even before the state of emergency was declared on March 14, the work had all but dried up, with fear of the virus keeping both clients and sex workers away.

"I stopped working the day before the lockdown, but by then it was only those of us who had to go out to buy food or pay bills," Beyonce told AFP.

"For several weeks, there were hardly any clients or working women."

What sex workers needed more than ever was recognition, says the Ecuadoran, an activist with the AFEMTRAS collective that has been lobbying for premises where women can shower and use the toilet.

"As sex workers, we're part of society and we need to work to look after our kids. But right now, we're only recognised as victims, not as workers nor even as prostitutes," she said, in a nod to the large numbers of foreigners caught up in sex-trafficking networks.

For now, with no money to pay the rent, she's just waiting for the day she can go back to work, even though it will be complicated with self-distancing rules.