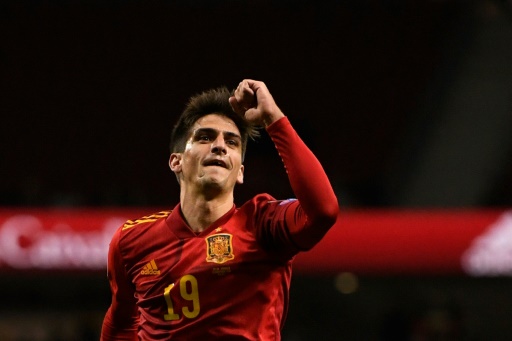 MADRID, Nov. 18 (Xinhua) -- Spain cruised to a comfortable 5-0 win at home to Romania in their final Euro 2020 qualifying game on Monday night as Villarreal striker Gerard Moreno scored twice and provoked an own goal.

Spain were already assured of their place in next summer's finals, but the win ensures they will be top seeds in the draw for the finals and theoretically have an easier draw.

Meanwhile, Romania had nothing to play for after defeat to Sweden in their last game ended their qualification chances.

The run up to the game had seen rumors that Spain coach Robert Moreno will not continue as coach into the final stage with Luis Enrique returning to the post he abandoned in August to look after his sick daughter, but there was no sign the rumors affected the Spanish side.

Spain took control from the start and Jose Gaya had already seen a goal ruled out for a push and Santi Cazorla hit the crossbar before Fabian Ruiz opened the scoring.

Kepa Arrizabalaga did well to save from George Puscas in the 12th minute, but Moreno netted his first of the night in the 33rd minute following a corner taken by Cazorla.

He added a second 10 minutes later when he had time to control a ball in the penalty area before beating the keeper with a calm finish and the Villarreal forward provoked the fourth of the night on the stroke of halftime when his pass was deflected into the Rumania goal by defender Adrian Rus.

Perhaps unsurprisingly the second half was a bit of a letdown as Romania sat a lot deeper to try and limit the damage, while the Spanish were happy to control the game and conserve strength.

The only goal of the second half came in injury time when Mikel Oyarzabal fired home from the edge of the area to finish another successful night for Moreno's side in what could be his last game in charge.