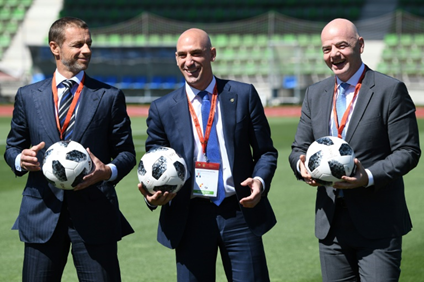 Spanish Football Federation (RFEF) president Luis Rubiales dismissed allegations that he tried to finance work on his house through the union of players he chaired as "falsehoods".

Radio Cadena SER, which first reported the story, said Monday that a court in Valencia opened a preliminary inquiry after a complaint from Miguel Angel Galan, a former leadership candidate for the RFEF.

But he reportedly proposed to pay part of his personal debt with money which was meant to be used for a construction project for the Spanish Players' Union (AFE).

The local courts of the Valencia region confirmed to AFP the filing of the complaint, but refused to comment on the opening of a preliminary investigation.

"I don't discuss falsehoods," Rubiales told reporters when asked about the report on the sidelines of a meeting of the RFEF in Las Rozas de Madrid on the outskirts of the Spanish capital attended by FIFA president Gianni Infantino and UEFA head Aleksander Ceferin.

"I am truly... satisfied with the behaviour which I have had throughout my life," added Rubiales as he stood flanked by Infantino who asked reporters to concentrate on "football".

"I have been suffering falsehoods for a while but my path is that of work and the truth and the rest honestly does not worry me, they are issues which are in the courts."

The AFE said Monday in a statement that it had "not financed any personal work for Luis Rubiales".

Daily newspaper El Mundo reported Tuesday that the architect who carried out the work for Rubiales had also filed a complaint over his debt to her, and because he allegedly hit her in a taxi.

Rubiales, 40, took over at the RFEF from Angel Maria Villar, who was implicated in a corruption case, and played a key part in the sacking of Spain coach Julen Lopetegui on the eve of the World Cup last month.